Hello, my name is Glen, and I’m a bit of a Pokémon fan. While that may not be the revelation of the century, I feel it should be pointed out. Recently, I’ve become a bit disillusioned with the monster-collecting RPG series. The 3DS titles, perfectly fine games by themselves, felt like they weren’t living up to the potential that previous games had set. It wasn’t really one thing that stood out to me like this, more like a large number of smaller grievances that snowballed into games that I didn’t quite enjoy as much as I would have liked.

So that brings me to Pokémon Sword and Shield, the games that kick off the eighth generation of the long-running series. These games mark two major landmarks for Pokémon, the first home console entry that isn’t a remake (No, Colosseum doesn’t count) and the first new game that runs in HD. That’s quite the jump from the 3DS and it seems to have caused a number of issues. More on those later. 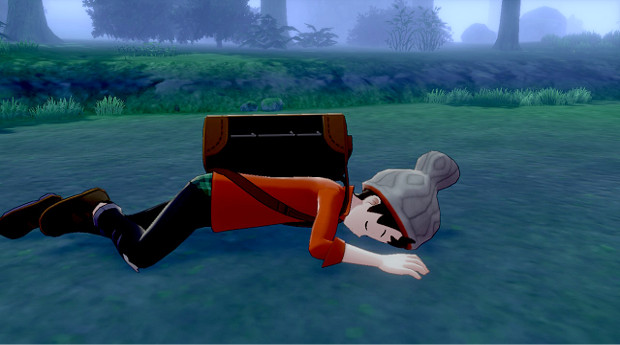 Typical, you fall asleep at a party and your friends ditch you in some foggy forest.

The game is set in the Galar region, a place very heavily inspired by the United Kingdom. You play as another kid who is given their first Pokémon and sets off to take part in the annual Gym Challenge by catching a whole bunch of Pokémon and building the perfect team to take down current Galar Champion Leon and his silly Charizard. So far, so Pokémon.

Some people might be a bit disappointed that after the Island Trials of Sun and Moon, this game seems to go back to the traditional gym setup. Personally, I didn’t enjoy those trials, so I welcome the return of gyms. While a couple of them are pretty straight-forward, the majority of them have a cool twist such as one revolving around double battles and one where you’re asked questions in the midst of a battle and punished if you get it wrong. Each one concludes in a “totally not a football stadium” battle against the Gym Leader.

This generation’s latest battle gimmick is Dynamax, a mechanic that allows your Pokémon to grow to titanic proportions in certain battles. Doing so increases the HP of your Pokémon and powers up its moves and grants them secondary effects such as raising stats or changing the weather. This only lasts three turns and you can only do it once per battle so choosing when to get huge is an important factor. 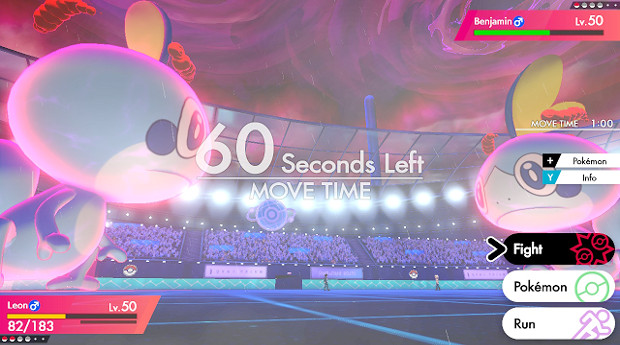 You too can have your dream Kaiju fight between two cute chameleons.

To put it simply, it’s a mixture of X and Y’s Mega Evolution and Sun and Moon’s Z Moves, neither of which return in this game. I find Dynamax to have more nuance than Z moves, which were basically only ever used as a nuke button, but compared to Mega Evolutions, I find it lacking. Mega Evolution changed a lot of fundamental aspects of a Pokémon by changing its ability, typing and stats, while Dynamax just gives you a flat power and health boost. Certain Pokémon can change their form when Dynamaxing, but outside of a better move, this is mostly cosmetic.

The main adventure is noticeably shorter than previous games, there’s very little to explore and discover in Galar, with a truly linear path that offers no optional places to discover and explore. Sure, there are plenty of hidden side paths to find, but this will most likely lead to just an item or a TM to help teach your Pokémon some moves. This isn’t helped by the forced EXP Share you are subject to, not giving you the option to make the game more challenging for yourself by limiting the EXP you get to the Pokémon that actually take part in battles. Because of this, I found the game very easy, I mean Pokémon games are not known for their difficulty, but this one hits a new level of simplicity.

The other main aspect of gameplay comes from collecting the 400 Pokémon in the Galar region, while no game apart from the original has let you catch them all, you always had the option of transferring your Pokémon from previous games. That isn’t the case with Sword and Shield, even when the upcoming storage application Pokémon HOME is released, you still won’t be able to get a complete National Pokédex, simply because they aren’t in the game’s code. Curiously, 35 Pokémon are there, but can’t be caught in the actual game. Whether you’ll be able to transfer them remains to be seen. Still, I can’t have a Krookodile or a Feraligatr here and that will forever make me sad. 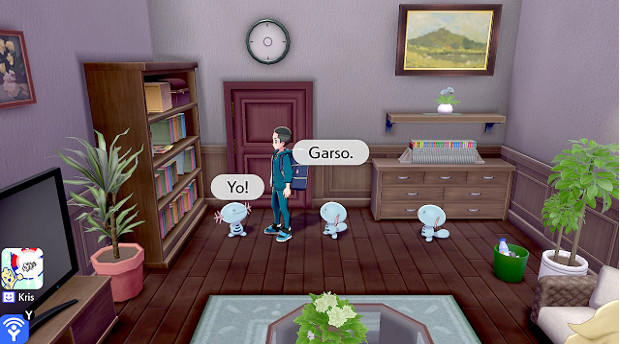 That Wooper is certainly down with the kids.

It’s not just the Pokémon and battle mechanics that are missing in action, Triple and Rotation battles are still absent, despite the Switch being a much more powerful piece of hardware. Post-game battle facilities are still limited to a simple battle gauntlet and outside of battling online and finishing the Pokédex; there isn’t much to do once the credits have rolled.

Of course, I can’t wrap up this gameplay analysis without mentioning the Wild Area, a sort of mini open world where you’re free to explore and catch Pokémon you see to your hearts content. While in this place, you can connect online and see other players run around in real time, talking to them will get you various ingredients to make curries with and helps to make the place feel less empty. That said, whenever you do go online, there is a noticeable drop in framerate whenever the game is loading another player. It’s not devastating, but it can be distracting.

While you are connected to the internet, you’ll receive various stamps that inform you of what other players are doing in their game. It’ll tell you things like if they are looking for a trade, taking part in a Max Raid Battle or won’t stop catching Magikarps for some unknown reason. Seriously, stop it. One is enough. 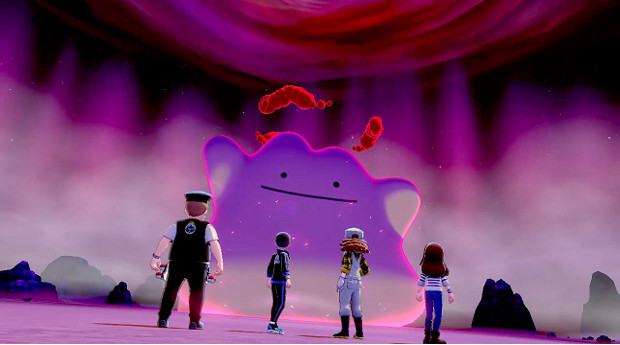 How is anyone supposed to take that seriously?

The Max Raid Battles I mentioned is another key feature of the Wild Area. Throughout the place, you’ll find dens that might contain a giant Pokémon and you can battle them with the help of 3 other people (Or CPU players if no-one likes you). Other people can join you through a certain menu, but the reliability of this can vary. I personally didn’t have too many issues with joining other players, (outside of that guy who can’t wait for at least a minute before starting) but other people have had much more difficulty doing the same thing.

That said, the biggest issue with the online features is that it doesn’t utilise the Switch Friends List as much as it should. The game tells you whenever one of your friends is doing stuff thanks to an icon on that person’s stamps, but there’s no way to directly invite someone on your friends list to trade or battle. Instead you both have to choose the trade or battle option, enter the same 4-digit code and wait until the game connects you that way. While this kind of system would be fine for playing with random strangers, it’s an unnecessary complication to a problem that shouldn’t exist in the first place. 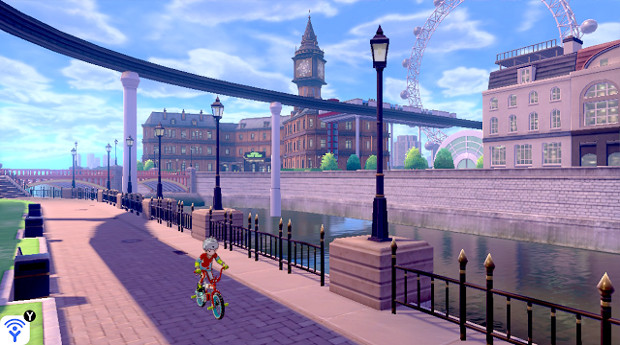 I can't believe it's not London!

The graphics this game boasts certainly aren’t the prettiest the Switch has to offer. Outside of the Pokémon models themselves, which look top-notch, it’s pretty standard looking. There are some exceptions though, and it’s certainly not an ugly game in that regard. But don’t expect to be wowed visually.

The soundtrack, on the other hand, is probably the best the series has ever had. The songs are exceptional, whether it is the Gym Leader Battle that develops whenever a Pokémon is knocked out and climaxes in an exciting finale when your opponent is down to one Pokémon, or the cacophony of Team Yell’s theme, there’s a vast variety of songs that are truly experimental for the series. The only negative I can give the sound is that the volume balance feels out of alignment. You can tweak the sound effects to get the balance you like (Although, this is hidden behind talking to an optional NPC for some reason), but if you decide to switch between TV and Handheld play, it can feel out of whack again. The Pokémon sounds are really loud on TV, especially when they grow giant.

In the end, there’s a lot to like about Sword and Shield, the new Pokémon are great, the wild area is better than I expected and the battle mechanics are still as complex as you’d expect. But being a long-time fan, I can’t help but notice all the things that are missing, and I think that stops the game from reaching the heights of something like Gold and Silver or Black and White. But there's promise here.

What Sword and Shield have to offer is obviously great, but what is also obvious is just how much isn’t there. There’s a good time to be had in Galar, but I can’t help but wonder what could have been had this game had more time in the oven.

The battle system is still as deep as it always is.
The new Pokémon designs are really good.
The Wild Area is surprisingly fun.

There’s very little to do outside of the main story and the competitive side of battling.
Some big framerate issues in the Wild Area when playing online.
I can’t catch a Krookodile and that makes me very upset.

It’s not just the Pokémon and battle mechanics that are missing in action, Triple and Rotation battles are still absent, despite the Switch being a much more powerful piece of hardware. Post-game battle facilities are still limited to a simple battle gauntlet and outside of battling online and finishing the Pokédex; there isn’t much to do once the credits have rolled.