I quite enjoyed punching Pikachu in the face back when the original Wii U version of Pokkén Tournament hit store shelves last year.  It was a solid fighting game with a truly unique form of gameplay that merged elements of 3D and 2D fighters into something wholly original.  So naturally, I was happy to see the game get another chance to shine when a Switch version was announced.

Truth be told, the game hasn't really changed much since its original Wii U incarnation. It's a fairly standard upgrade for the genre, with 5 new characters, 2 new stages, a new Team Battle mode, new daily challenges and some new multiplayer features thrown in for good measure; but the core gameplay hasn't really been touched in any major way.

As such, our original review for Pokkén Tournament still largely applies and if you would like to get a feel for how the game plays, I recommend that you click here to read it; a demo is also available on the eShop right now that includes the tutorial section and a limited ability to test out the fighting gameplay for yourself, I highly recommend giving it a try. 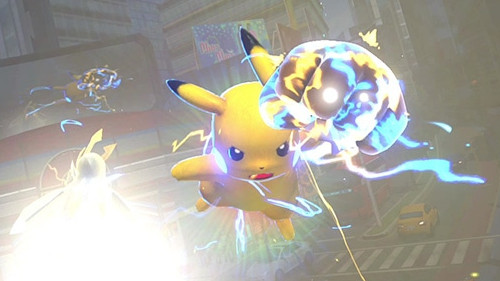 Right! So! You've read my review of the Wii U version, you've played the demo until your thumbs fell off and you're still here? Well, that can only mean that you're interested in seeing what's actually new here and what I thought of it? Well lucky you! That's exactly what you're gonna get!

Ok, so lets start off with the visual upgrade over the Wii U version. Truth be told, it's a very disappointing improvement here. The game's visuals largely remain the same as on Wii U, with a very small increase in resolution being the only evident difference between the two. The final game is no better than the demo in that regard, meaning that you get a native 720p in docked mode instead of the sub HD resolution on Wii U, around a 25% increase in pixel count according to Digital Foundry's pre-release analysis.

This means that the game sports a distinctly blurry and jagged look in comparison to its contemporaries on Switch and it's a real shame to see. While the game was a looker on Wii U, the blurry image quality did really drag down the whole presentation and after seeing how much of an improvement Mario Kart 8 Deluxe and Fast Racing RMX were over their Wii U counterparts, it's especially disappointing to see it still looking blurry here. Come on Namco! We've seen the Switch do better! 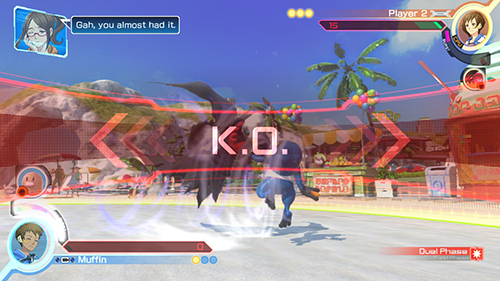 On the plus side, the game runs at a flawless 60FPS in both handheld and docked modes in all modes outside of splitscreen (which runs at 30FPS) and the game generally looks great in handheld mode, where the blemishes of a low resolution are hidden much more effectively. Truth be told, it's still rather remarkable to see a game of this calibre fully playable in the palms of your hands; truly an age of wonder we live in!

Right! So the technical upgrade is a touch disappointing, but what about the rest? How does 5 new characters, 2 new stages, a new Team Battle mode, local wireless multiplayer, Daily Challenges and enhanced online functionality sound? Well now, that's more like it Namco!

Each of the new characters feel distinctive and add a new kind of fighting style to the mix.  I'm particularily fond of Decidyeye's blend of projectile and aerial combo based gameplay, which allows you to zip from one end of the battlefield to the other in a snap and also hover in the air while your opponent fruitlessly swings and misses (well, have you ever tried to punch a bird!?).  It's great fun!

The rest of the newcomers also add their own wrinkles to the existing formula. Croagunk offers a blend of sneak attacks and speedy combos, Empoleon and Darkrai are tankier and more defensive in nature and Scizor is a great all rounder with some swift combos and a nice oompft to him.

Pokkén Tournament DX also introduces two new support Pokémon, Poppilo and Litten, which aren't a bad choice in the middle of a fight, but I still found myself sticking to my tried and true combo of Cubone and Diglett; I can't help it, I just like middle finger combo breakers. These additions go a long way towards fleshing out the roster and chucking some more meat on the game's bones. 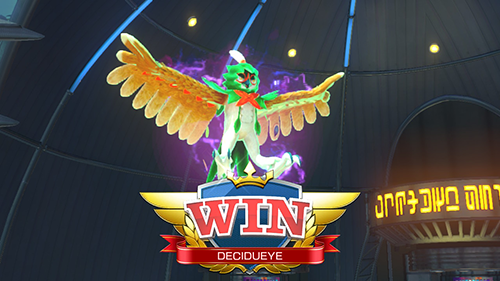 The character roster swings and hits!

Sadly the same treatment wasn't quite applied to the game's single player offerings. Outside of the addition of Daily Challenges, which force you to use a specific Pokemon and win a couple of battles or so against the CPU each day, and the Panels, which are basically this game's equivilent of the Super Smash Bros Challenge Board, there isn't really anything else new to speak of. The Ferrum League is largely unchanged from the original version and there is still no real Arcade or Survival style mode to speak of.  It's still a very slight experience if you're not playing multiplayer sadly.

The same holds true for the fact that everything is unlocked from the get go. You get access to all of the game's characters and stages right from the outset, with unlocks relegated to titles and avatar clothing only. While it makes the game much more accessible for multiplayer, it also means that there isn't much to shoot for when playing single player.

Multiplayer however is still a pretty great time and that's only made better with this game's deluxe additions. The online mode has been given a particularily nice new feature in the form of Online Tournaments, which function in a very similar fashion as in Mario Kart 8 Deluxe. You can set the name, the number of participants, start and finish times, times of rankings, the playable stages and more! It's a pretty comprehensive feature set and fans of the game's competitive side will no doubt greatly appreciate this feature. 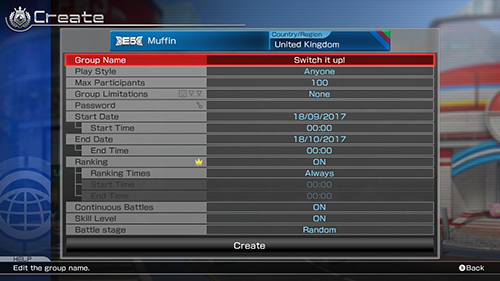 Speaking of new features, the game now sports a built-in replay function.  Much requested by fans of the original, the game now captures replays of all of your matches, be they online, local or via local wireless; and though it's a far cry from the functionality you saw with Mario Kart TV in Mario Kart 8 Deluxe, the ability to switch between player perspectives, to turn on and off HUD elements and display button inputs from either player will be much appreciated by those looking to capture footage of their fighting antics.

Team Battle is another really nice addition. Those familiar with Namco's Soul Calibur series will be right at home here as the mode works much the same way here. You and your opponent pick a team of 3 Pokémon and bash each other senseless until one team runs out of health.  The twist here being that your Pokémon's health, your Support gauge and your Synergy gauge carries over from fight to fight.

It can be surprisingly strategic as you struggle to decide between "wasting" your Support and Synergy gauges now, or holding out in the hope that you can carry it over to the next fight and net yourself an advantage later on; another nice touch lies in the fact that you can't tell what Pokémon your opponent is going to choose next, as you select which Pokémon to send out next by hitting one of three buttons on the controller. While it's not a massive gamechanging mode, it's a nice addition that adds a bit of variety to the multiplayer fun. 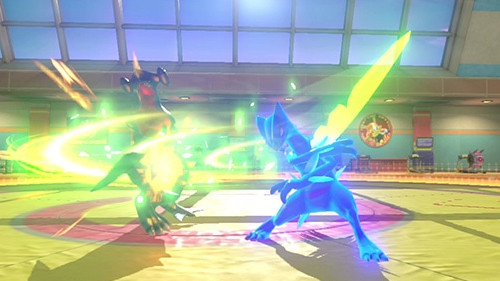 Sceptile is still one of the best looking Grass-Type starter evolutions.

The last major addition comes in the form of local wireless, single screen and splitscreen multiplayer modes. Like the LAN mode in the original, local wireless allows you to hook up two Switch consoles and enjoy a full 60FPS local multiplayer experience with a dedicated screen for each player; in my experience of trying it out, this worked without issues in both handheld and docked modes.

Naturally, this is the best way to play multiplayer, but also requires a large overall expense between you and your friends.  Thankfully, the other ways of doing multiplayer work pretty well. Splitscreen works exactly as you'd expect, albeit with a pretty small display for each player and a drop to 30FPS; this is a decent solution for playing on the TV, but is perhaps not ideal for Tabletop mode, where screen real estate is at a premium.

Meanwhile Single Screen mode condenses the gameplay onto, well... one screen; I don't know what else you were expecting there! This works better than I was expecting, as the camera does a pretty decent job of keeping track of both players and is a pretty good alternative to the splitscreen mode, particularily considering that it maintains the full 60FPS of the other modes, unlike splitscreen, and I suspect that it'll be the mode of choice for Tabletop mode for most players.

Rounding off the multiplayer package is support for dual joy-cons, single joy-cons, the Switch Pro Controller and the Pokkén Controller (via USB); all of these control schemes are fully featured and work very well. Even with a single joy-con, I didn't find myself feeling handicapped and I had a great time in multiplayer. Overall, Namco have done a great job of making the multiplayer gameplay more accessible to players than ever before. 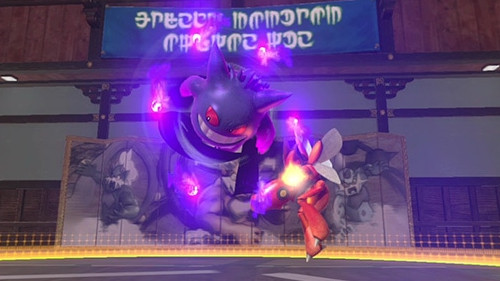 Gengar is still genuinely menacing and fun to play as.

And that's about it for Pokkén Tournament DX.  If you've played the original Wii U version, you kind of already know what you're getting with this package. For those that have yet to knock the stuffing out of your favourite pocket monsters? You're gonna find a surprisingly solid, unique and enjoyable fighting game, with some in-depth gameplay that belies its cute looking exterior.

The learning curve is still high, it's still not quite as pick up and play friendly as the Switch adverts suggest and the single player offerings still feel lacking, but the multiplayer is good fun. Give the demo a go, power through the tutorials and you'll find a fun fighting game experience that deserves a look in.

The technical upgrades over the Wii U version are disappointing, but the gameplay additions are solid. It's a pretty nice deluxe edition of a unique and fun fighter that doesn't really fix the game's flaws, but makes what was good even better than before.

Fighting gameplay is still fresh and unique
Multiplayer is fun, improved & more accessible
Decidueye is the best newcomer, rightly so
The full Pokkén experience, at home or on the go

If you've played the original Wii U version, you kind of already know what you're getting with this package. For those that have yet to knock the stuffing out of your favourite pocket monsters? You're gonna find a surprisingly solid, unique and enjoyable fighting game.