Taking the creative block building of Minecraft and mixing in some RPG elements, Portal Knights tries its hand at an action packed and driven adventure in this popular and ever expanding genre.

Let’s tackle the Creeper in the room - Yes, this is clearly a Minecraft inspired adventure with nicer graphics which is something that has been done endlessly for years now - But does Portal Knights offer enough unique differences to make it a worthy alternative? Or is this another shameless imitation? As an avid Minecraft player, I can safely say that whilst this looks like the aforementioned block building phenomenon and borrows a lot of elements, it plays very differently and is a genuinely unique take on the genre.

It’s like an N64 Rare title in that regard because sure, Banjo-Kazooie was clearly heavily inspired by Super Mario 64 but they are arguably very different games, just like Mario Kart 64 and Diddy Kong Racing or Mario World and Donkey Kong Country.

In fact, with its gorgeous bright graphics, whimsical music and charming characters, this is pretty much a Rareware take on Minecraft... aside from the fact it obviously isn’t produced by Rare.

At the start of the game you’ll be given the option to create your character in a Mii-type fashion, choosing everything from your alluring smirk to a crazy hair colour. From there you can choose your type or ‘speciality’ and this is where, almost immediately, the game comes into its own. 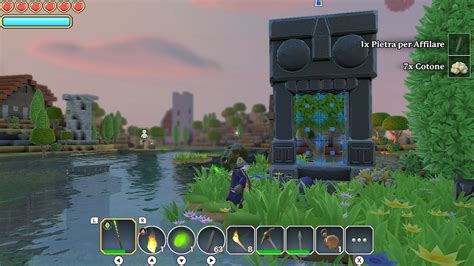 Being the manly beast that I am, I chose to be a ‘Warrior’ which grants me with more strength in close combat and better stamina, something that suits me well as I’ve never been good at aiming and certainly never have time for all that magic spell casting nonsense - I like to get stuck in and pound some goblin behind with my mighty sword.

As I chose to be a warrior and found myself in lots of close combat situations, I was often returning to the safe haven I had made out of mud, wood and stone blocks (I’ll make it look pretty eventually I promise) cooking up different recipes with the garbage I had collected on my journey so that I had plenty of food in my bag for when the going gets tough out on my adventures.

If I had chosen to be a mage though, I’d find myself more concerned with making potions and really nice looking robes. This is where friends come in.

While you can play the entire adventure alone and have the ability to make more than one character if you’d like to have a crack at the game with a different skill-set, you are able to and encouraged to play with up to 4 people online, taking on monsters in your party with a mixture of spell-binding magic and hardcore beatings.

Monsters are always nearby, but they are much tamer and easier to kill in the day time, whereas the ones that lurk out at night tend to be stronger and appear in larger numbers, so on your first day in a new world you’ll want to set up a house, big or small, so you can quickly run inside and hide if things get too gnarly.

The main quest of the game has you travelling from one world to the next through portals. Each world is big enough to spend a decent amount of time exploring and finding all sorts of treasures, but small enough to discover all that it has to offer within a few hours, offering a very different feel to Minecraft’s ever expanding over-world.

It’s this need to travel from one level to the next that makes the game feel that much more driven and focused and where the game begins to feel a lot more like an RPG than a relaxing and creative venture.

As you fight enemies, you’ll gain XP and money and on occasion, when it’s a particularly nasty blighter, you’ll get a blue shard. If you go back to your abode and fuse four shards together you can make a blue portal stone.

Each world has a portal that you have to find, with a number of portal stones missing, so once you have found the portal and fused enough stones, you can go on to the next level. You can travel back to any level at any given time, which is good as before I knew just how much travelling I’d be doing I ended up making a huge house in World 1 and found myself making rubbish mud shacks in the later worlds.

Because of this constant travelling, the game feels nice and fast-paced, always giving you something to work towards but does make you feel less inclined to be creative with the block building side of things, as you know you’ll be moving on relatively soon. Because of this, the block building becomes more of a necessity and just something to do for safety as oppose to something you’ll do with permanent residence in mind and so this game is much more an action-RPG with light creative flourishes than the other way around. 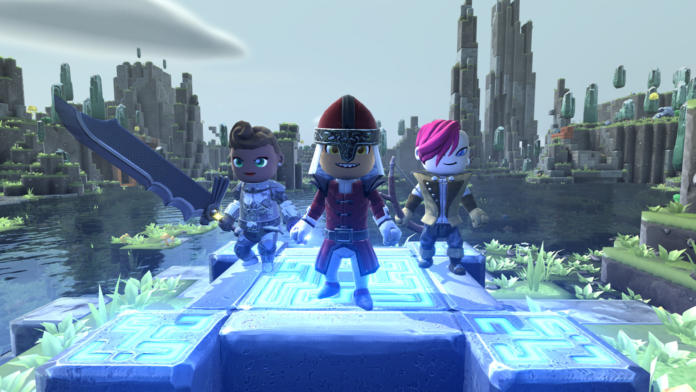 Each world offers more than just mindlessly killing bad guys on the open field, mind. Every world has mines to discover which play host to harder enemies but also have rewards at the end in the form of chests full of gold and fully formed portal stones. Not only that but you’ll come across a bunch of NPC characters on your adventure that need little tasks carrying out, from collecting a certain amount of material to fighting off a bunch of nearby enemies or simply crafting a door because theirs has broken.

While the creative block building may take bit of a back seat (though it is entirely up to you), the crafting certainly doesn’t. You’ll want a decent sized house just because the sheer amount of things you’ll be crafting. Initially you’ll make a crafting table for simple things such as making swords and pick-axes, but then you’ll need to make another ‘creative’ crafting table to create decorative items, or a furnace to smelt metals which will be needed to get the right materials to use on the initial crafting table for better weapons and armour – Then you have farming which could become a game of its own.

In this respect, you can play the game however you please. If you play with friends, you might just opt for a simple life of creating a big farm, giving out lots of food to your trusty fighters but if you’re a solo player, you may dab your hand in a bit of everything in a bid to become a legendary lone warrior.

You always have access to a world map which shows you your current world and the path to the next world, slowly showing the way to big bosses and other areas.

This game looks beautiful on Switch but surprisingly looks most impressive when in handheld mode. Nothing seems to get scaled back and the lush grass and real time shadows look fantastic. While it still looks great on the TV, the draw distance for the smaller details such as lush grass and flowers is noticeable on the flat open fields but not enough to distract. In terms of Switch titles, this is up there with Odyssey and Yooka-Laylee in the looks department.

The music is equally charming and gives off extreme Rare vibes, to the point where I had to check the credits to make sure Grant Kirkhope hadn’t sneakily done another soundtrack I didn’t know about last year.

Portal Knights is a really fun action RPG, with plenty of options for levelling up your character in different areas to give them more health, higher strength or speedier legs. You can play from start to finish with an eye on the prize, fighting your way to victory from one world to the next or take your time with the crafting and creative process.

This is a unique take on Minecraft which may not be as creative but it more than makes up for it by being laser focused, with clear goals and stronger RPG features.

A great alternate take on an ever-expanding genre.

You can play from start to finish with an eye on the prize, fighting your way to victory from one world to the next or take your time with the crafting and creative process.