Puzzle League DS is another Nintendo title that has its eyes set upon both the seasoned and the casual gamer, marking the return of the popular Panel De Pon /Tetris Attack/Pokémon Puzzle League/Pokémon Puzzle challenge style of puzzle game. Intelligent Systems has managed to conserve this simple concept and yet evolve the game by creating lots of fun new modes, making an attractive and simple interface, adding touch controls and online play.

The game's basic premise is switching coloured blocks horizontally so that three of the same colour are stacked together, making them disappear and leaving space for the top blocks to fall down. If the blocks hit the top of the screen, it's game over. This simple gameplay style is sure to draw in casual or non gamers, but for those who want depth, this game won't disappoint. Stack four or more blocks together for additional points, clear big groups of blocks at the same time for a combo and plan ahead, so that when a stack is cleared the falling blocks will clear other stacks, thus making chains. Also, when playing against another player (or CPU) when they make a combo or chain, an uncoloured giant block, called Garbage, falls on top of your neat little stack; to get rid of it, you must clear some blocks that are touching it, so that it turns into normal blocks. By combining these three aspects, the player must think and play fast and plan ahead to ensure a huge score. The game is played by holding the DS horizontally like a book (although you can change this in the options) and using the touch screen to slide blocks around, which breathes a new life into the game, as it offers pin point accuracy and allows the user to play faster. The D-Pad and face buttons can also be used: it works well, but it pales in comparison to the intuitive touch controls.

There are plenty of game modes that put a slight twist on the rules, so that you don't get bored. In Endless mode you can play until you get tired or lose, in Clear you must clear the blocks that are above a pre-determined line, Garbage Challenge is like Endless mode, but with Garbage falling periodically. Vs. COM is basically a simulation of multiplayer pitting you against an AI controlled opponent in three different modes: Score Battle, Clear Battle and Garbage Battle. In Time Attack you have 2 minutes to get the highest score possible and have 3 sets of rules: Score Attack, Garbage Attack and Lift Attack (add as many rows as possible). One of the most interesting modes is Puzzle, which basically gives you the task of clearing all the blocks on the screen with only a set amount of moves. This changes playing from a frantic pace to a more relaxed one, where you need to think quite ahead and find patterns to clear the screen. The difficulty of the puzzles varies a lot: some are easy and you figure them out fast, while others are quite hard, but when you solve them you'll feel a great sense of accomplishment. An original mode that makes its first appearance is daily play, which is a nod to Brain Training- you can play three short two minute modes once a day and a chart will keep track of your score, so you can see if you got better or if you need to try harder. While not exactly mind-blowing, it's an interesting addition. 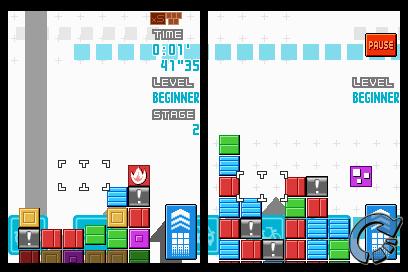 A big hook of Puzzle League is multiplayer, which can be played with only one card and allows you to send a demo of Score and Garbage Attack to your friends that don't have the game. You can also send saved videos of Score Attack sessions that you are particularly proud of. The biggest and to some, the most important newcomer to the game is the online mode: play against your friends using the friend codes and you can use the mic or headset to talk even while you play. If you don't have any friends you can play against random people that share your birthday (which is both weird and cool), are beginners or advanced players like you or just relax and play a mode that doesn't keep track of your score. The online works very well and makes the game even more competitive, but heed this: if you're playing with the face buttons, you'll be in a huge disadvantage against players that use the touch screen.

Graphically, it's a very simple game, but it's very stylized and fresh. The dynamic backgrounds sprawl through the two screens and different types of blocks, so you'll never get tired of them. The menus are also very minimalist and easy to move through, specially with the help of the stylus, so you'll have no trouble moving through all those game modes. The soundtrack is catchy and changes according to the backgrounds, but even though the styles are quite varied with electronic and classical Japanese music, it gets repetitive and tiresome after some hours of play.

Intelligent Systems did a great job of squeezing so much fun out of an already enjoyable series and the touch screen controls, the myriad of modes, cool presentation, wireless and online makes Puzzle League DS one of the most addictive and fun games to come out lately. If you want a great game to play with family and friends, look no further!

A must-have title, unless the genre doesn't click with you. Don't blame us if you get too addicted.

Repetitive music
Not for people who dislike puzzle games... obvously