From your own half, you see the ball being taken up the wing by a a team mate. The opponents are all charging towards him, to put the breaks on his one-man mission to grab a last minute winner. Anticipating a cross goal mouth scramble, you engage the after burners, making a bee line towards goal as you watch the ball bouncing across the line. You throw yourself forward towards the ball...it hits your rear tires, goes up against the bar, hits you again and goes in. It may not be pretty, but it's an incredibly chaotic and immensely fun experience, much like Rocket League as a whole.

During the Nintendo Spotlight at E3 this year one of the first things I noticed was the presence of the Rocket League car screeching around at the start. Having never played it either originally on PlayStation 4 or since then on the Xbox One or PC, I was perhaps more excited than series veterans who probably shrugged their shoulders and thought "about time." Psyonix's indie standout has gained a huge following and a massive presence on the eSports circuit as well.

So what it is? Essentially the game is football but, instead of controlling Ronaldo, Messi and co on the green grass of Wembley or the Beranbeú, you're bombing around in a car that jumps, flips, flies and boosts around a plethora of stadiums for five minutes at a time. 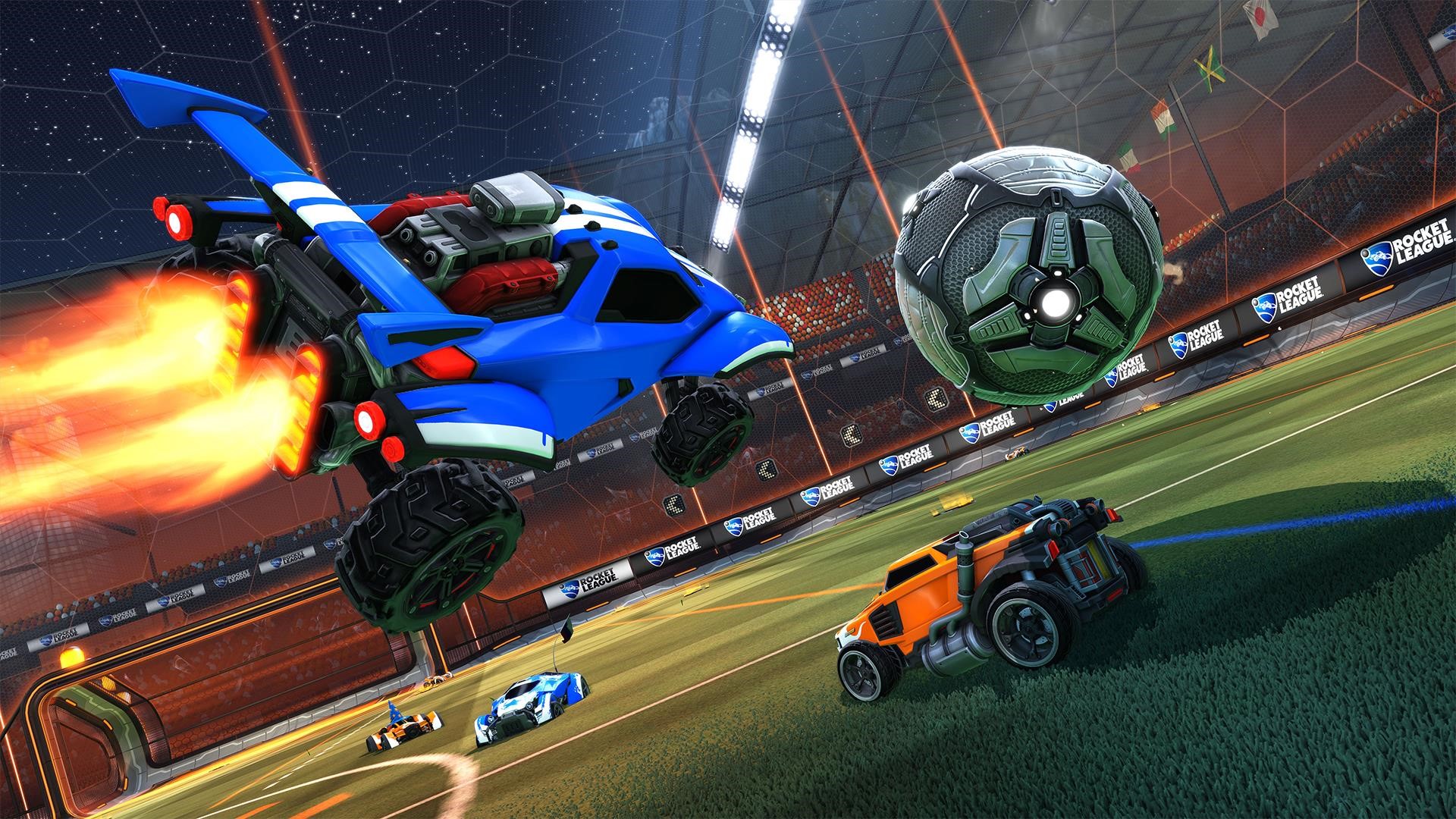 As a pick up and play title, this is easy to drop in to. As a deep and rich experience that rewards practice and persistence, it's perhaps even better. The overall game experience is incredibly tight and intuitive and relies heavily on your own personal skill or luck. Whereas sometimes with FIFA you get the feeling that no matter what you do you will never be able to score, or when your keeper tamely palms it out to an opposition striker for the umpteenth time for a simple tap in, there's none of that nonsense here.

Being the Billy Big Time that I am, I decided to jump straight into a match without even bothering with the tutorials. With cross-play between Xbox One and PC versions readily available, I must have infuriated veterans by aimlessly bombing around after the ball, just trying to fumble my way through the five minutes. Then, with a minute to go, I managed to sneak a goal at the near post. My visions of being N-Europe's Rocket League eSports captain were gaining mental traction. However in my next few games, I was on the losing team more often than not and found I wasn't helping my team perhaps as best I could. But the funny things was it was always, well, fun.

Aside from a tutorial that showcases just how much depth and how serious this game is, your given options for online or local play. Online consists of 1 v 1 all the way up to 4 v 4 games, and also specific game types as well like drop shot. With the Switch you can do split screen and play with a Joy-Con each as well, which is a great incentive for multiplayer gamers who, like me, still value a good couch-based get together, and you can do that either online or as part of a local seasons as well.

There's also a garage where you can customise your car, chassis design, goal celebrations and more; it's also here you'll find the Super Mario and Metroid themed vehicles, which a fantastic bit of fan service to welcome Nintendo players to the series. 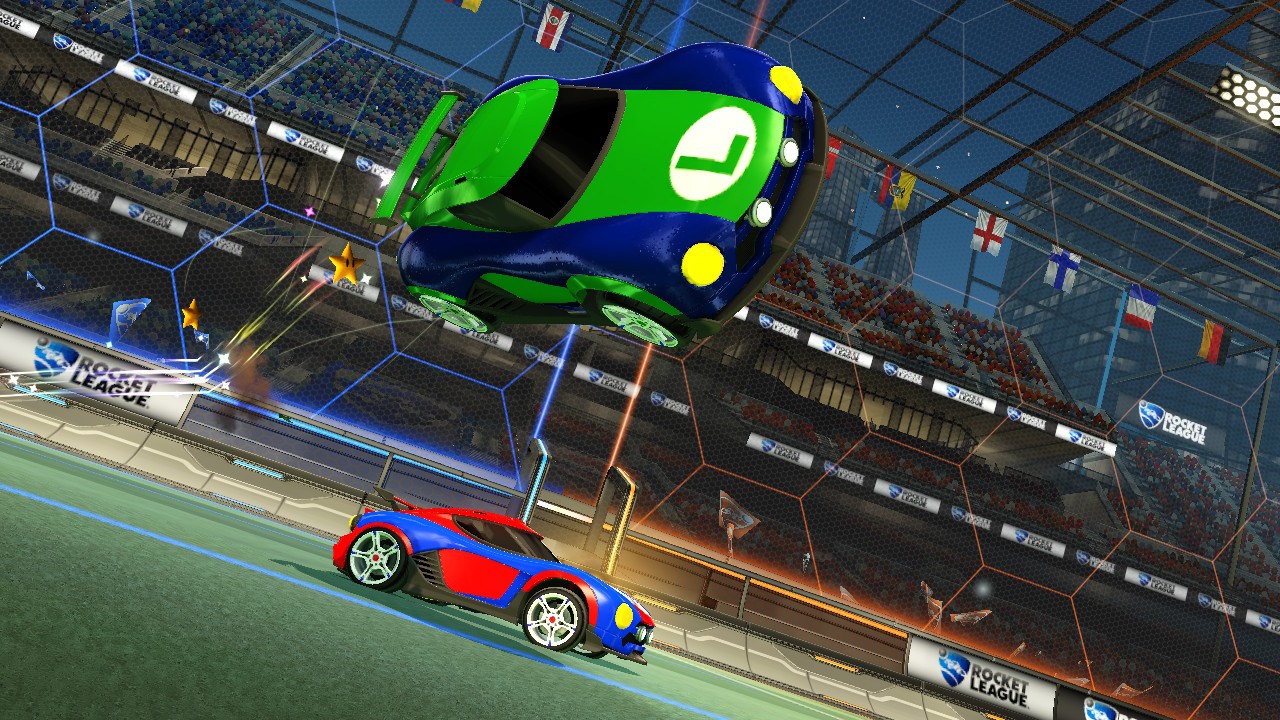 The presentation of the game itself is a mixed bag, but ultimately in a way that isn't detrimental to the game. The graphics are ropey at best and downright terrible at times too; indeed when playing in handheld mode the first comparison that came to mind was Metroid Prime Hunters on the original DS. Docked mode is definitely better, but it's still light years away from its home console counterparts. However, by making this sacfrice, it means that the game always, always runs super smooth at 60 FPS. Which in a game like Rocket League where every touch, jump or goal mouth scramble is sacred is vital. Indeed Panic Button, who as well as working wonders with Doom on the Switch has handled this port as well, should really be applauded for making an incredibly sensible decision and realising Rocket League isn't about pixel count and all about precise gameplay and goals. This is never the game you'll show someone quickly as an example of how Switch games look, but it'll probably the game you sit down with them and play for hours and hours on end.

Indeed, Rocket League is a time killer in the best possible way. Hours have passed with me playing the game without realising, "one more game" syndrome has never been more apparent, certainly for me. And online play is a doddle, another example of the benefits of cross-play is you'll be guaranteed a match within minutes, and it's just as easy to invite friends into a group and either play a private match or decide to take on veterans on other platforms.

Overall Rocket League succeeds for being simple yet effective. It is just so much fun to play and be a part of and, almost incredibly, it is only £15 on the eShop. Not only is it the best value, it's also the best sports game on the Switch and an incredibly welcome and successful addition to the Switch library of games. I'm not sure how long it will take for the novelty of "I can't believe I can play the same game on the TV AND in the palm of my hands" to wear off, but this is yet another example of technical wizardry at its best and shows that if developers really put the effort in, they'll reap the rewards.

At the first Christmas for the Switch, with the likes of Mario, Skyrim and Xenoblade taking the headlines, Rocket League is perhaps the best of the bunch. Whether you're a sports fan or not; addictive, competitive and just simply pure fun, Rocket League is the perfect game to play around the TV on Christmas morning and for many Christmases to come. Psyonix and Panic Button have nailed Rocket League on the Switch and caps off an incredible first year for the Switch.

Pure fun
The best sports game on Switch
Runs smoothly both on the TV and in handheld mode can
Easy to pick up, rewarding to master

Graphics have been sacrificed and are poor

As a pick up and play title, this is easy to drop in to. As a deep and rich experience that rewards practice and persistence, it's perhaps even better.