Shantae and the Seven Sirens

Review: Shantae and the Seven Sirens

The Shantae series has a long history on Nintendo platforms, but you already knew that, didn’t you? What you might not have known, though, is that Shantae and the Seven Sirens marks the series’ first foray into full on Metroidvania territory! While the series has dabbled with Metroidvania-alike exploration in prior entries, it has always been closer in structure to Nintendo’s The Legend of Zelda series, with towns to visit, sidequests to complete, and whatnot; while the last game was a straight up linear platformer more akin to Donkey Kong Country. This time around, though? Wayforward have instead opted for a much more non-linear structure, with a sprawling Super Metroid-esque world map that begs to be explored. 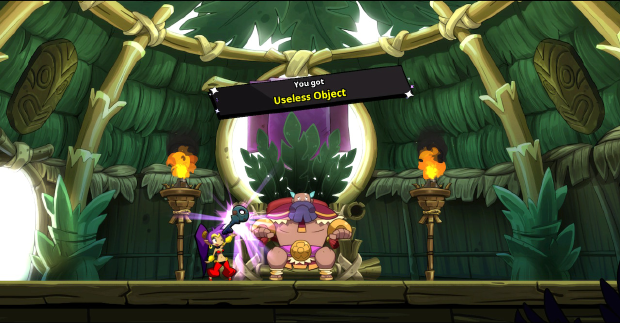 Don’t worry. Your map is a bit more useful than this thing

The decision to dump the 3D backdrops from Shantae: Half-Genie Hero has clearly freed up development resources, as this game’s world map is easily the biggest and most expansive yet seen in a Shantae game. While the game retains the same basic gameplay loop from the first three games of go to new area, find dungeon, beat dungeon, go to new area; the manner in which you explore the world is very different, as you are given just one large interconnected map to explore instead of segregated areas, this time around. Sadly, the level design in general is quite weak here, lacking in interesting landmarks, making navigation not only fairly dull, but also leading to a bit of original NES Metroid syndrome; as the similar looking areas start to lead to confusion about where to go, meaning that you’ll be staring at the map screen very often. Much like Super Mario Sunshine, Shantae and the Seven Sirens also takes place entirely on a tropical island, with an underwater city you explore. The singular level themes end up leading to a feeling of monotony, as the areas all end up feeling rather similar to each other.

It's not all doom and gloom though, as the game has a lot going for it despite the middling level design. The core gameplay of jumping, climbing, hair whipping, and whatnot is just as fun as ever; and the enemy variety is excellent! It’s easily the largest and most varied cast of baddies in any Shantae game; something that has often been a point of contention with the past games for me. The writing is solid and funny as always, the animation is fantastic, and the new powerups are all fun, as well as a welcome change of pace from the usual set of transformation powers. The new transformation system has also been streamlined by mapping each transformation to a distinct button, instead of relying on a lengthy dancing animation; a welcome change that does end up improving the flow of the gameplay quite nicely.

Much of the surprise of the new transformation powers is undermined by the level design however, which so flagrantly telegraphs what abilities that you’re going to get that it robs them of all of their surprise and renders them into glorified colour coded keys. 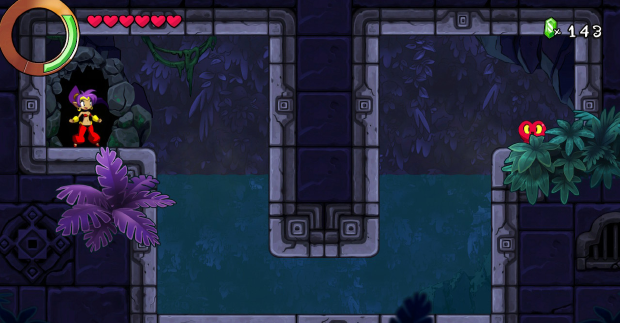 Gee. I wonder if I’m going to learn how to swim soon…

The new card system is quite cool though. Taking a cue from Castlevania: Aria of Sorrow, each enemy in the game has a percentage chance of dropping a Monster Card representing themselves; and when you collect enough, you gain an ability that you can equip to a limited number of slots. While these abilities don’t go nearly as far as in Konami’s vampiric GBA adventure, mostly being relegated to equipable status enhancers here, they nonetheless add some spice and excitement to exploring the world, as you never quite know what abilities you’re going to end up picking up. I hope that they continue to expand on this concept and on the enemy variety in future titles, as it's a great mechanic that should be explored further.

The dungeons are generally the best part of a Shantae game, and that’s no exception here. Taking on a more linear structure than the sprawling main world map, the level design is thankfully more interesting inside the dungeons themselves, with puzzles to solve and bosses to fight, that end up being the most enjoyable part of the game. Even here however, the bosses come across as rather lacklustre in comparison to earlier games in the series; save for the final boss, which is pretty great all around. 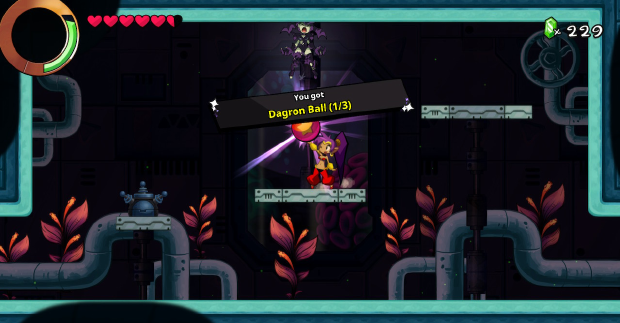 Original item. Do not steal

Sadly, the music is also a big step down from the previous games. For the first time, series veteran composer Jake Kaufman did not return to score Shantae’s adventure, and his absence is sorely felt. Though Wayforward’s other composers did a decent job of stepping in and setting a befitting mood, the soundtrack just lacks the energy and pizazz that the series is known for, and ultimately just isn’t very memorable at all. This is the first time I have walked away from a Shantae game without immediately chucking the soundtrack onto my smart phone afterwards, and that leaves me with a very sad & empty feeling in my heart.

Overall, Shantae and the Seven Sirens is a fine enough game, that achieves what it sets out to do with adequate competency. But ultimately, despite the gorgeous animated cutscenes, humorous dialogue & great characters, sprawling map, and cool new powers, it doesn’t end up leaving me with much of a lasting impression. Much of the game ultimately ends up feeling rather forgettable, and that ultimately comes down to the rather rote and dull level design. The decision to go with a Metroidvania structure is one that works just fine on paper, but a Metroidvania game lives and dies by the quality of its level design. When that quality is not in place? Well… there isn’t really much left to hold the experience up really.

Shantae and the Seven Sirens is a perfectly competent Metroidvania, but ultimately is not an exceptional one, nor an exceptional Shantae game. It’s a fundamentally middling game with some exceptional elements that ultimately can’t lift the experience, because the level design simply doesn’t rise above mediocrity.

The core gameplay elements are as fun as ever
Excellent enemy variety, and the new Monster Card system is great
Fantastic presentation, funny & well written dialogue and oodles of charm

Overall, Shantae and the Seven Sirens is a fine enough game, that achieves what it sets out to do with adequate competency. But ultimately, despite the gorgeous animated cutscenes, humorous dialogue & great characters, sprawling map and cool new powers; it doesn’t end up leaving me with much of a lasting impression.