Sim City on the DS seems like a no brainer- the touch controls and dual screen practically begged for one, but is being a mayor on the dual screened wonder as good as we hoped for?

Sim City DS is very similar to the old iterations of the game, but simplified to fit the tiny screens and Nintendo's mantra of gaming for everyone. And this is very inconsistent with the goal of the game, because managing a city is somewhat complicated for a little kid, yet they insist on having mini games pop up that have you blowing at the mic to put out fires or furiously tapping Santa Claus to drop presents thus giving you some money. While these can be somewhat fun because it distracts you a little from the hard task that is running a city: they can become repetitive and annoy hardcore Sim players that just want to manage their metropolis. Luckily, these events can be turned off, so it's not a reason top stop playing. Veteran players can jump right in the game, while newcomers can go through an intensive tutorial that teaches the basics, so while at first all those icons and things to manage seem daunting, soon the player will be familiar with everything.

Town management basically focuses on three things: Residential, Commercial and Industrial demand, meaning you need to satisfy the craving of these. Through sheets and graphics you keep track of crime, pollution, air quality, energy and water supply and other important factors to make the city prosper, so you'll need to build residential zones for people to live in, industrial zones to provide work and commercial zones, so your Sims can spend their precious cash. However, you cannot just build things anywhere, for example, industry pollutes the air and raises crime and no one wants to live near that zone, so you must make sure that the residential and industrial zones aren't too close, but they can't be too far away either, because no one wants a two hour travel to work. Then, you need to raise the quality of life and property value, so you need to build things like parks and zoos to make certain zones more attractive. 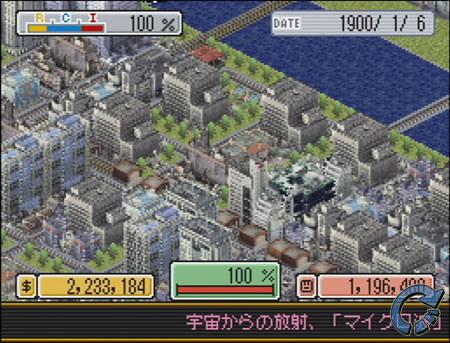 Electric and water distribution has also been simplified, instead of needing to make pipes and power lines go to every factory, house or store, any zone that's adjacent to another one that's already provided with electricity and water, automatically has access to it. It's something that Sim City fans might not like, but newcomers may welcome, because laying down power lines isn't exactly the most exciting task in the world. Basically, you need to oversee every aspect of a city, like transportation, public security, health, education and more. But what about the green stuff that makes the world go around? Cash management is simple to grasp: make money with taxes, lose money with funding, maintaining buildings and constructions, just check out the budget sheet to see if you'll lose or gain money at the end of the month and year and you're set to go.

And just when you think everything is going well, despair! An alien invasion, a typhoon, fires, you name it, all kinds of disasters can happen to the city and it's up to you (are you supposed to be a mayor or a god?) to stop the city from destruction by playing the aforementioned mini games. Another comeback from earlier Sim City games is your assistant, but with two slight changes: 1) he/she has had an anime facelift and 2) he/she is totally useless. While in the previous games, you could often turn to your advisor for important advice, now it's as useful as an elephant in a highway. Your education system is in trouble? Ask for advice! "You've built a park! I love parks!" Gee thanks a lot, Mr. Assistant!

Along with the main "Create a City" mode, there's "Save a City", where you must bring the town back from the depths of bankruptcy and other problems. It's a nice addition, but you can finish it fast and never look at it again. Multiplayer wise, you can send mail to other people with the game along with a landmark that your friends can put in their own town. The game will keep you entertained for many hours, whether it's because you want to make a bigger city or to try out different difficulty settings and terrains, so expect to put lots of effort and time into Sim City if you want to build a prosperous Metropolis.

The game makes fairly good use of DS' capabilities- the bottom screen displays a map of city, the data sheets and graphs, and schematics for construction. The stylus use is intuitive and very useful, but sometimes creating precise buildings is hard, because there are only two levels of zoom: very far away and too close. This makes the construction of roads and power lines a difficult chore at times, but luckily, everything (except demolitions) can be undone. Navigating through menus and maps is pretty easy and makes the game easy to pick up. The top screen shows an almost static model of the town, but although it is detailed and somewhat realistic it's very dull and you won't be looking at it very often. The music is acceptable and relaxing and doesn't annoy or distract you from your mayoral duties.

Despite all its flaws, Sim City DS is a good game that can be addictive and, even though it was simplified to appeal to the more casual gamers, it still has depth and asks for smart thinking. Its portability and touch screen usage definitely are big pros, making the game a nice travel companion.

Not without its flaws, but it uses the DS well to make an attractive game to those interested in the genre. Power fantasies assuaged.