Almost everyone has played one of the original Sonic games at some point in their life, and they keep getting released on all of the major consoles. It's only logical that another compilation would be released prior to Sonic 4, and this time the DS gets the classic Sonic treatment. With the amount of practice they've had with re-releasing these games that SEGA would be able to create a perfect port on even a Casio calculator. So is this port carefully done, or simply a rush job?

The collection includes Sonic 1, 2, 3 and Knuckles; as well as lock-on for both Sonic 2 and Sonic 3 (no Blue Sphere game in this compilation). Oddly, Sonic 3 & Knuckles - what many fans deem as the definitive way to enjoy both Sonic 3 and Sonic & Knuckles - is named Knuckles in Sonic the Hedgehog 3. The description makes it sound like it will only let you play the Sonic 3 levels as Knuckles, but this not the case, and this game will allow you to play through Sonic 3 & Knuckles as any of the characters. The only extras in this verison are 27 concept art images from the original games displaying the classic Sonic, while the box and all new logos show his modern stick-like form.

So how do these games perform on the DS? The game has obviously had a change in aspect ratio to make use of the whole screen, and this is actually done particuarlly well as all game elements still appear fine. Some of the text is slightly cropped or misplaced, but this doesn't impact the games in any way. The biggest problem is the framerate. Sonic the Hedgehog seems to constantly struggle to keep the framerare up to your speed. It's still perfectly playable and a lot of fun, but it really isn't ideal. Sonic the Hedgehog 2 fares much better - the only noticable slowdown is when you lose all your rings. Sonic 3 & Knuckles is almost unplayable as Sonic and Tails, but runs pretty well when you stick with one character. 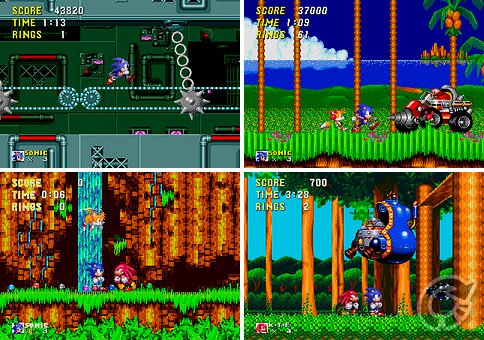 The framerate issues are a big shame as the graphics still look extremely crisp and clear, especially on the DS' small screen. The audio performs much better, and the music is a joy to listen to when using headphones. The only audio problem is that collecting the Power Sneakers will make the music higher pitched, as opposed to increasing the tempo of the music. Which sounds really odd each time you collect them.

Lacking from both Sonic 2 and Sonic 3 & Knucles is the multiplayer. This could have been implemented over Wi-Fi, and possibly even improved (to give both players a full screen, as opposed to splitting one screen in half). Disappointing indeed. Further niggles include the PAL version of the Genesis box arts in the menus have not been replaced with Mega Drive ones. It's a tiny, unimportant thing but it still demonstrates the lack of care placed in some quarters of this port.

While the look, sound and feel of these classics evokes many memories; the quality of the port brings this excitement down. There are much better ports and compilations on other consoles, and the original games and a second hand Mega Drive are cheap. So the only reason to purchase this collection is if you just need to own Sonic the Hedgehog on every device in creation.

The original Sonic games have aged brilliantly. Unfortunately this collection has been made with little-to-no effort resulting in framerate issues that bring them down.

Still a lot of fun

Framerate issues
No multiplayer
No extras