Writer’s note: A number of reviews and players have mentioned serious performance issues and frame drops. Aspyr Media has issued a statement that they are working on a patch to fix this, and hope to release it in May. During my playthrough, I did not note any of these issues however.

A steady stream of Star Wars titles has been making it to the Nintendo Switch as of late. While EA’s big hitters, like Star Wars Jedi: Fallen Order and Star Wars: Squadrons, are still absent, there is plenty to enjoy for fans of George Lucas’s universe.

Aspyr Media is responsible for most of the titles on the system, as they have been focussing on getting older Star Wars games ported to the Switch. Star Wars Racer and two Jedi Knight titles are there for you to enjoy, and currently they are said to be working on a remake of the RPG series Knights of the Old Republic. 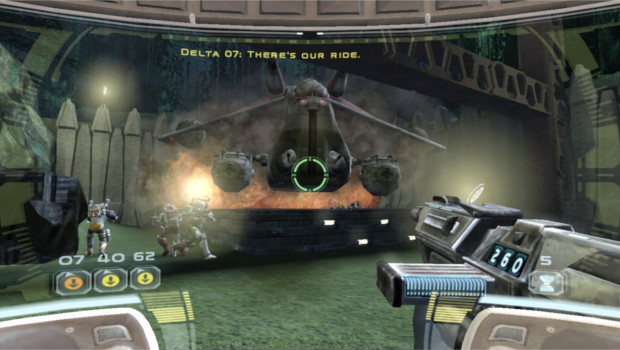 When you order an Uber in the Star Wars universe.

The newest title to come to the Switch, though, is Star Wars: Republic Commando. The original title is over 15 years old, and was released back in 2005 on the original Xbox and on PC. Fast-forward to 2021 and we can enjoy the title on the Nintendo Switch. Unfortunately, the multiplayer mode has been stripped from it, but what is still there is an 8-hour long squad-based first person shooter set in one of the less exposed corners of the Star Wars story.

The original game launched in between the two movies Attack of the Clones and Revenge of the Sith, and that is exactly where the story plays out as well. If you are not into Star Wars, this may all sound like abracadabra, but fans of the series will know where to place it in the story line. To counter the Separatist threat, the Republic is creating an army of clone troopers who will fight in the Clone War. Republic Commando tells the story of the first endeavours of an elite squad of clone troopers who have been genetically engineered for even better performance, and serve as the special ops for the Republic.

Where most Star Wars games put you in the shoes of one of the series’ heroes, or a light-saber wielding Jedi, or an X-Wing pilot, Republic Commando takes the route less travelled and makes you the leader of the 4-headed elite squad of clones. It’s a bold move as for quite some parts of the story, it doesn’t really feel like a Star Wars game. Light-sabers and the Force are far to be seen, and instead you are making your way through dark corridors and hangars, blaster in hand, fighting off waves of droids, Trandoshans, and drones. Of course, there are plenty of pointers that this is a Star Wars game, as you encounter droidekas (those rolling bots from The Phantom Menace) and you will team up with Wookiees. Even one or two of the bigger characters will make a cameo. But for the rest it is all pretty dark and gritty, as opposed to the colourful cast of characters you usually meet in the Star Wars movies and games. 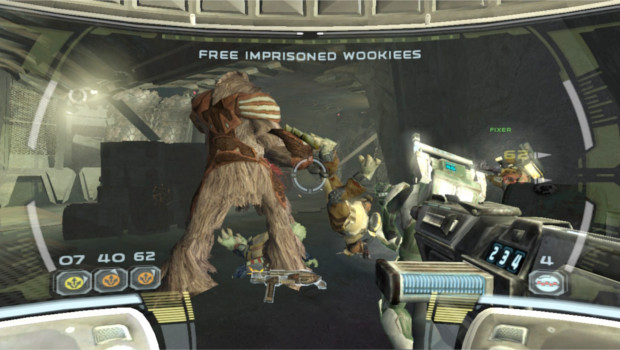 So story-wise this is a game that approaches the Star Wars story from a different angle, and fans of the series who hope to battle alongside all the greats from the series will be a bit disappointed by it. That, of course, can be forgiven if this is still a great game (or if you are a die-hard fan who just wants to absorb all things Star Wars).

So how does Star Wars: Republic Commando hold up in 2021? It’s a tricky game to review, as the port is pretty true to the original, so in essence it still feels, looks, and plays like a 2005 game. To put it into perspective, it is the year that we were playing games like Resident Evil 4, Pokémon XD: Gale of Darkness, and Fire Emblem: Path of Radiance on our Nintendo Gamecubes. This means the graphics are a bit on the rough side, and the gunplay was not as it is now, if you look at games like Borderlands or Bulletstorm.

Republic Commando does have a couple of tricks up its sleeve though. First of all, you are not alone. As said, you are the leader of a 4-headed elite squad (they don’t call you “Boss” for nothing). Meanwhile Scorch, Fixer, and Sev (or, RC-1262, RC-1140, and RC-1207, if you want their serial number) support you along most of the way. Not only do they offer some welcome back-up fire, you can strategically use them to make your way through the missions. For example, coming into an enemy-flooded hangar, you can assign your squad members a task with the push of a button (spots where they can perform an action are highlighted). Sending one into a sniper position, while another takes down a droid dispenser, creating a gap for you to quickly hack a console. This is the kind of action that constantly takes place and works pretty well. Most of the time your squad’s AI knows what they are doing, and you really need them in order to complete your missions. 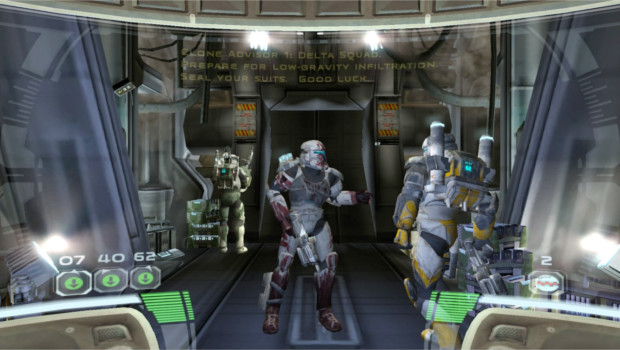 Delta Squad, gearing up, and ready for deployment.

If you are downed, a team mate can revive you (and vice versa), so it’s only game over when all four of you are knocked down. This means you can often keep going, as there is always a team member who is still standing to revive you (and there are plenty of healing points along the way as well). There are, however, some serious difficulty spikes where it feels near impossible to get past an area, and I had to switch from Normal to Easy difficulty for a couple of chapters (something you can handily do on the fly). Speaking of changing settings, you can also reassign all buttons to your liking. Gyro aiming unfortunately is not available.

Your arsenal of weapons consists of a Trooper’s trusty blaster. As a special unit, you do, however, have a sniper module and a grenade launcher that you can attach to increase functionality. A fourth spot in your arsenal is for whatever you pick up from enemies, and ranges from a shotgun to a Wookiee bowcaster. A variety of grenades completes your arsenal. A point of critique is how your weapons handle, or more specifically said, the lack of feeling of impact. Sometimes you are shooting an enemy and it is hard to tell if you are hitting it or not, as there are almost no visual markers, and some enemies are massive bullet sponges. The variety in enemies is not great either. 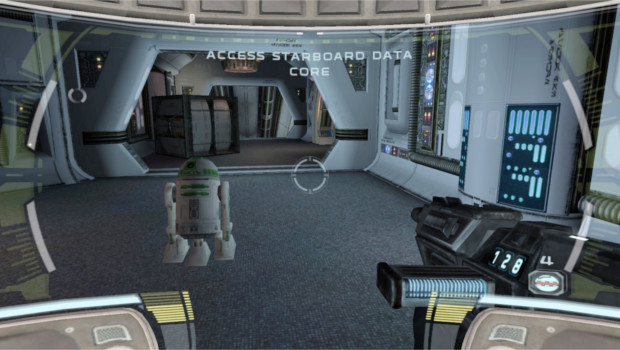 ...Is this the Droid you're looking for?

So, in 8 hours Republic Commando takes you and your squad on an adventure through 3 main areas. After that, the game is over and there is no multiplayer to extend the playtime. There are some unlockables to view after, but that is about it. The ride is pretty decent, although the age of the game is definitely showing both in graphics and gunplay. The sound is good though, with some typical Star Wars tunes and sound effects, and a constant banter between your squad. The squad-based structure works great, and makes the game interesting enough to not feel too repetitive. And while there is enough in the environment to make you aware that you are playing a Star Wars game, it’s also the least Star Wars-feeling game I played. Therefore Star Wars: Republic Commando is a tricky one to recommend, as it’s dated, and really for the die-hard fans of the series. Multiplayer could have prolonged the playtime a bit, but unfortunately that has been stripped out.

Star Wars: Republic definitely shows its age as a 16-year old game, both in graphics and gameplay. It also takes place in one of the lesser known parts of the Star Wars story, with dito characters. Tackling objectives with your team however works wonders and adds some needed depth to this first-person shooter. It's a shame the multiplayer mode is missing in action.

Working as a team and controlling your squad works well, adds depth
The audio track, sound effects and banter are great
Interesting approach and story of a darker corner of the Star Wars universe...

...however this does not always make it feel like a Star Wars game
Graphics and shooting mechanics have not aged gracefully
Multiplayer has been stripped out

Where most Star Wars games put you in the shoes of one of the series’ heroes, or a light-saber wielding Jedi, or an X-Wing pilot, Republic Commando takes the route less travelled and makes you the leader of the 4-headed elite squad of clones.