I fully admit that I've been putting off playing this dirt-digging indie title for a while now, it's perhaps bad enough that I almost certainly own the game at least on the 3DS, if not possibly on the Wii U as well and yet I've still not dug through the dirt in this digital desert world once.

It has dawned on me that although I now have the game in front of me on the Switch, over a week has passed yet here I am only on the title screen featuring a lone, currently nameless protagonist (to me anyway) who is roaming the endlessly looped stretch of sand, accompanied by theme music which I can only describe as being a cross between the ethereal tones of Metroid Prime, coupled with traditional Western music with similarities to Red Dead Redemption and a rousing chorus of chants in the distance inbetween a methodical drumbeat; all brought together with the strum of a guitar.

Perhaps I should just press start, pick up my pickaxe and get on with playing the game? It's almost sundown afterall.

Well now, things have just gotten mighty interesting ... it turns out that you're a steam-powered robot named Rusty who has been given permission to prospect down the old mine owned by his Uncle Joe down in the town of Tumbleton. Not much sooner after arriving though, you end up falling through the ground into the mine, where you meet Dorothy and well... that would be telling now wouldn't it? The long and short of it is though, that you're there now and you figure you might as well make the best of things. 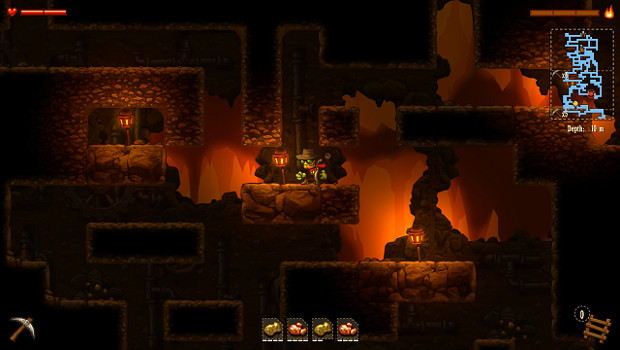 Right from the start, SteamWorld Dig has a very unique atmosphere.

Armed with your Uncle's trusty pickaxe, you set about digging your way through the mine, watching out for enemies hidden in the dirt, all the while looking for treasure so that you can take it back to the surface of the small town so that you can contribute towards the local economy and maybe get yourself a few shiny trinkets for your troubles. Ore can be exchanged for cash with Dorothy, which can then be exchanged with Cranky for upgrades... (orbs are required in addition to cash for some items) you can also hang out with Lola outside the Saloon if you feel the need to.

So off we go down the mine, keeping an eye on the old health bar which can be replenished with hearts, also there's this light meter which can be kept burning bright with fire emblems (no not that one!) which you'll want to keep topped up as otherwise you'll have severely reduced visibility which will hinder your progress. Once you progress a bit you'll also have a water meter which you'll want to keep refilling in pools of water when you can, (or by nabbing water emblems) as this will supply your hydraulic systems which a lot of your equipment and moves are reliant upon.

You can dig one square of dirt to the left, right, above or below you but only while standing, if you fall too far down and want to get back up then so long as there is enough wall then you can wall-jump your way out of there in a manner which is a lot simpler than in the Metroid series but is just as valuable a move to you here. 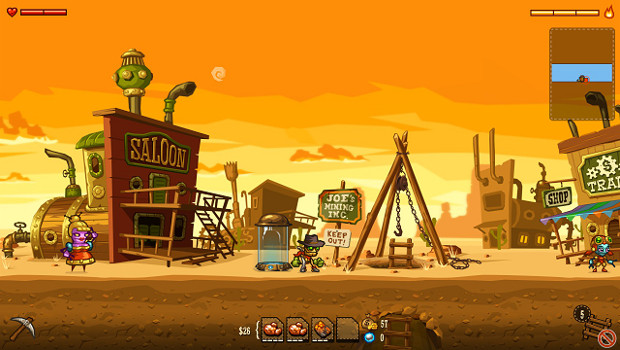 The town hub area above the ground is very bright in contrast to the dark depths of the mine.

If you find yourself getting into a fix then you can use consumable items such as a ladder so that you can climb one space higher - or several if you stack them - or there are lamps which will light the area a few squares around where they are placed. Eventually you'll even unlock sticks of Dynamite but of course you'll want to be careful where you drop them, lest you blow yourself to smithereens!

Self-destructing from the menu is also an option if you find yourself trapped but depending on how much progress you've made since your last auto-save at the surface, it might be more prudent to just reload the game if you don't want to lose anything; perhaps not how the game was intended to be played but I would wager that a lot of players have done this when making mistakes while learning the rules of the game early on, myself included obviously.

There are also teleporters you can purchase which will return you to the surface but those will cost you orbs, these are quite rare to begin with so suffice to say that I didn't purchase any as I wanted to make sure that I wouldn't miss out on any upgrades which require large amounts of orbs and cash. The option is there though if you just want to make it to the end of the game without having to worry too much about ever getting stuck I suppose. 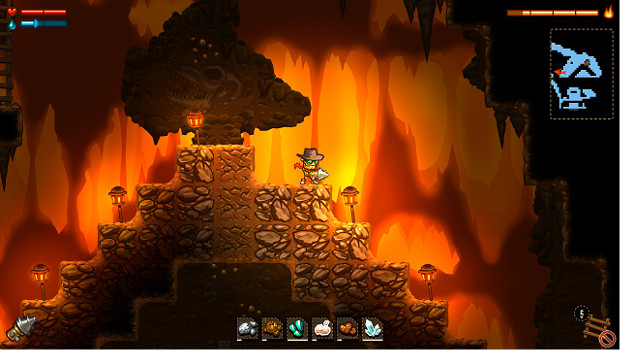 Once you obtain the drill, the gameplay really starts to open up.

When this game was originally reviewed for the 3DS in 2013, the main appeal was clearly the feedback loop of digging deeper to obtain greater riches in order to level up the town, which in turn allowed you to become more powerful. This is still very much true for myself today playing the game for the first time, so the core concept which made SteamWorld Dig such an appealing title in the first place is definitely alive and well, if not reinvigorated in this Switch version as it really does offer the best of both worlds due to the hybrid nature of the system.

During the course of the just over ten hours it took me to see the end, I tended to play mostly undocked as it made it easier to dip in and out of when I'd have the time to devote to a little digging. Each time I would discover a new major area though, that's when I found docked mode to be very useful as it really highlights the best parts of the game on the big screen, even though it still looks flawless on the Switch itself as well. It's always nice to have options. 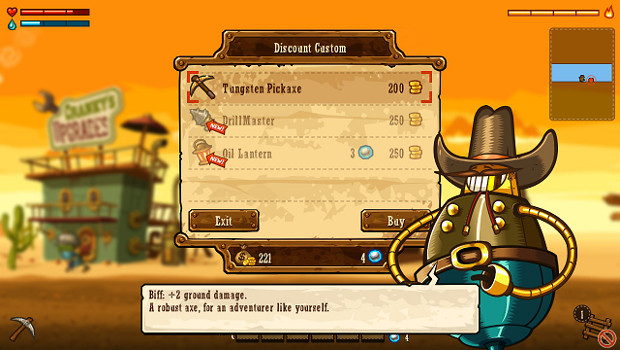 The narrative is quite clevery written, even though you'll probably be able to guess where it's going a little bit before the end, it certainly adds an original spin to the cautionary tale relating to ever-advancing technology, especially when you contrast that with the simpler life of the Steambots in their nostalgic Wild West setting.

After you've obtained most of the upgrades, you'll probably find yourself going back to get anything you might have missed, for SteamWorld Dig does have a selection of secrets to find which may lead to upgrades or just more loot. You will be graded on how well you do overall in various categories once you reach the end, so striving for that extra bit towards almost full completion may have merit for some and I can certainly see how this could potentially be a fun game to speedrun. 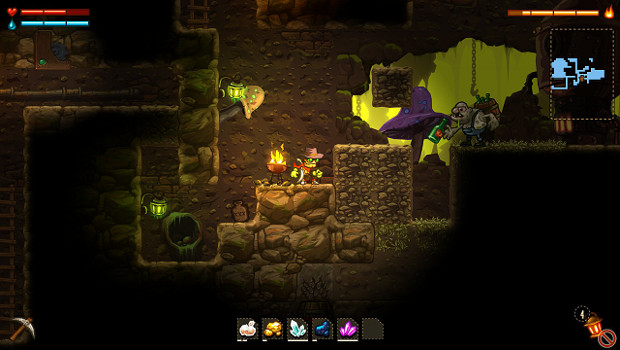 The deeper you dig in the mine...

Everything about the game world Image & Form have created here has a substantial feeling to it, perhaps partially afforded by an excellent art style but mostly because so much care and thought has gone into the placement of every single character, background element, enemy... even the very ground itself has been laid to perfection ready for you to dig into.

Following every swing of your pickaxe, you'll always get that satisfying "swoosh" as it swipes through the air, closely followed by either a "thwack", "clang" or "crunch" depending on the context of what you're digging into. THe looped background music tracks for each area are all carefully cultivated to make sure that you're always be immersed in the task at hand no matter where you are and something else I found to be particularly impressive with ragards to the sound design, is the way in which enemies will telegraph their location based on the noises they might be making even if you can't quite see them in the dark; though it still doesn't make the experience any less unnerving. 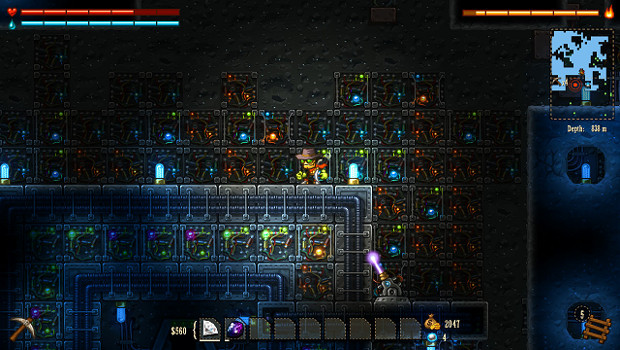 ...the more you'll uncover. Will you make it to the end?

Ultimately what makes this game so engaging is its emergent gameplay, because with every square of dirt that you dig, you're creating your own path from start to finish. So although the underground areas, the challenge rooms for upgrades and traps might be in the same place each time with you always ending up digging down to the bottom, every time you play again (if you return) you'll likely find yourself making a different path from the first time you play. The fact that the map in the top-right hand corner of the screen always reflects the tunnels you're digging makes you feel as if there is more of a conscious connection to your actions; there's nothing else quite like it and having experienced it for myself I would personally recommend SteamWorld Dig to anyone who hasn't played it yet.

It's time to dig deep! Roll on SteamWorld Dig 2 which released first digitally on the Switch late last year and will be arriving in physical form on 12/04/2018 which I now personally cannot wait for, so look out for a review nearer the time.

SteamWorld Dig is a delightful title which just shows how talented Image & Form are as a studio. More than that though, this is a game which I think every gamer should experience regardless of platform as it's a modern-day classic. Rusty and the residents of Tumbleton have definitely found their definitive home on the Switch though.

Everything about the game world Image & Form have created here has a substantial feeling to it, perhaps partially afforded by an excellent art style but mostly because so much care and thought has gone into the placement of every single character, background element, enemy... even the very ground itself has been laid to perfection ready for you to dig into.