Stubbs the Zombie in Rebel Without a Pulse

Review: Stubbs the Zombie in Rebel Without a Pulse

Originally released on the first Xbox in 2005, Stubbs the Zombie was a game developed by some ex-Halo developers using the same game engine as Halo. The new Switch release updates Stubbs the Zombie with 1080p resolution, while keeping everything else as close to the original as possible. Aspyr have decided on focusing on making the game available to new audiences, as they have done with other Switch releases such as Star Wars: Republic Commando and Star Wars: Jedi Knight 2.

Stubbs the Zombie isn’t like most traditional games, you are the “alpha zombie” Stubbs. You don’t know why or how you are a zombie, but you want to eat brains and cause more zombies. Your most common tools for doing this are a basic hit and a bite, which works on unsuspecting or stunned enemies. After you’ve killed someone, they’ll come back as a zombie and attack other enemies. You have some slight control over the zombies by whistling, although this doesn’t seem to work some of the time. Unfortunately, it’s very difficult to create a large horde due to some ignoring your whistle, getting stuck on scenery as well as sections of the game that cause you to go back to having no zombies following you. 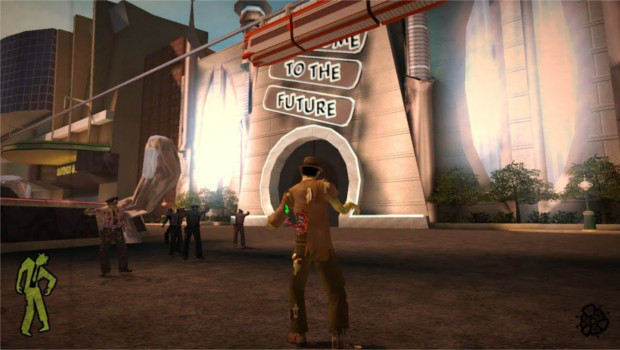 Welcome to the future... it's almost prophetic.

Throughout the first few levels, you’ll also gain a few special abilities, such as sticky gut grenades and a detachable hand - probably the most important and more versatile of abilities in the game. You control your hand (like Thing from Addams Family) and can possess enemies, using them to attack or activate buttons. The gunplay when possessing is very clunky and basic (even though the developers came from Halo) but perfectly serviceable for the short spurts you’ll be using it for. The special abilities are very useful, but don’t create new zombies, so using these powerful abilities also has a disadvantage.

Once you’ve unlocked these abilities, the combat throughout the rest of the game is unfortunately mostly the same. You just go through groups of different enemies, but all the encounters feel the same outside a couple of exceptions. Even though the game is fairly short - a playthrough is roughly 7 hours - it also manages to outstay its welcome. There are a few laughs that alleviate this, but some jokes just completely fail. There’s also a very limited amount of voice lines from each type of enemy, so while something can start off funny, it’s just annoying the hundredth time you hear the same voice line. 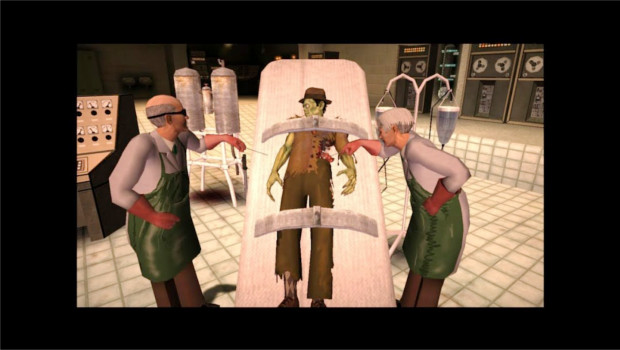 Take a little bit of this, plus a bit of that, and he's cured! Magic? No, it's Science!

Not helping this is the lack of music while playing the game. While it does create an eerie empty feeling, which does fit with being a zombie, it also increases the feeling of being bored when doing the same thing again. There are also a couple of moments in the game where there was originally music playing, but the tracks don’t play in this remaster. This includes the main menu as well as a few moments in-game - including one area that has a jukebox you can’t activate. It’s a shame, too, as the soundtrack consists of some wonderful 50s inspired covers of songs, including a wonderful rendition of Strangers in the Night by Cake, which I don’t recall hearing at all during the game. The soundtrack is available on various streaming services (and digital music stores) and I highly recommend checking it out. There is a dance mini-game where thankfully the music does play correctly, including Mr. Sandman and Lollipop. That said, the buttons during the dance section feel very unresponsive so listening to the same short loop can get annoying. 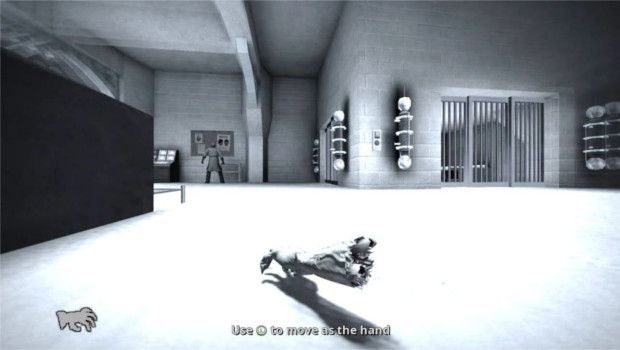 Use the (not so) hidden hand, to take control and press buttons.

During a few levels, you will get to drive vehicles. Here you can definitely see the Halo engine at work, as it has the exact floaty vehicle controls as the early Halo games. I did encounter a couple of issues with them though, as my gun stopped working for a couple of minutes in one section (luckily the bug also affected the vehicle an enemy was driving), and the machine gun on another vehicle fires a single shot at a time, while it was rapid fire in the original release. It seems like an oversight in the porting, similar to the issue with the soundtrack. My Switch also crashed four times during my 7 hour playthrough, and booting up the game causes you to start the level you were on in the beginning instead of the latest checkpoint.

There were also other bugs encountered in the game, such as zombies that ignore your calls, or get stuck on scenery (or occasionally on nothing at all, just running on the spot), and some minor ones like enemies getting stuck in fall animations when they die. It’s a big shame as a fair few of the technical issues seem to be new to this port, and weren’t present in the original version of the game. 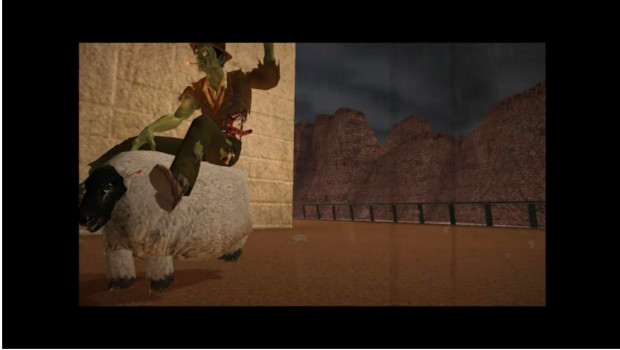 Nothing to see here, just a Zombie riding a sheep.

The entirety of the campaign can be enjoyed in local split-screen co-op with a Pro Controller or second set of Joy Cons. The second player controls a second Stubbs in a different colour suit. This mode does make the game easier, as not only can you do a much better job at distracting enemies than you can with the horde of zombies, but respawns exist. That said, it does create far more potential in terms of fun tactics for dealing with enemies.

Stubbs the Zombie is very much a product of its time, with outdated gameplay and janky moments. That said, the “city of the future” 50s setting is very charming, and there are some enjoyable and funny moments dotted throughout the game. I would love for this port to eventually lead to a sequel as there is a ton of potential for a new Stubbs game, but unfortunately I don’t think this port will resurrect the franchise.

You control your hand (like Thing from Addams Family) and can possess enemies, using them to attack or activate buttons.