I like rhythm games, I especially like when rhythm games try to mash themselves up with some other game genre to provide a different take on the rhythm game. On the surface, Super Dodgeball Beats looks like that kind of game with its decidedly sporty aesthetic, but rest assured, this game plays like your standard rhythm escapade. That certainly isn’t a bad thing, of course, but with how wacky the entire concept of “Dodgeball Rhythm Game” is, I was kind of expecting this game to take more inspiration from that.

But I’m getting ahead of myself; Super Dodgeball Beats is a rhythm game that tasks you with taking a group of nerds through a dodgeball tournament with the power of good rhythm and no actual athletic skill what-so-ever. There’s a story there, but do you really need to hear about it? You know full well that it’s an excuse plot and that’s all it needs to be. 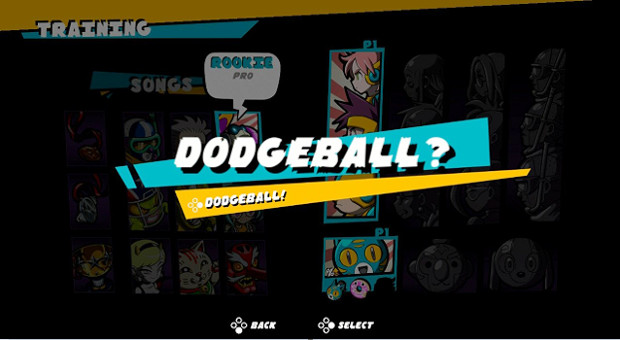 The best confirm screen ever, pretty much tells you all you need to know.

Each of the four members of your dodgeball team corresponds to one of the four face buttons on the controller, as a song progresses, rings will appear around each team member and you have to time your button presses to when those rings converge with the ring underneath that particular team member. There are three different kinds of notes to cope with, basic single button presses, and ones where you have to hold a button for a while and a particularly weird version where you have to hold the control stick instead. It’s pretty easy to grasp and it shouldn’t take long to learn.

Where things get more complicated is using powerups. As you play each song, a bar fills up and when it’s full, you get a powerup that will impede your opponents in some way that makes it harder to keep up their rhythm. Of course, those opponents aren’t going to just stand there and take it, as they’ll be dishing out their own powerups to mess with you too.

It’s a fine idea on paper and works great for any 2-player sessions with friends that you can have, but when I was playing in the single player mode, I found myself getting really frustrated about halfway through. I was losing songs because I just couldn’t keep up with everything that was going on, not because I wasn’t keeping rhythm well enough.

As far as I’m aware, there’s no way to turn these off, even for when you’re practising a song. It’s just a constant case of interruptions that end up detracting from my enjoyment and they became more irritating than fun. I know full well that I’ll never beat the hardest difficulty because of this since I can’t get accustomed to learning the layouts of the songs with stuff flying all over the place. 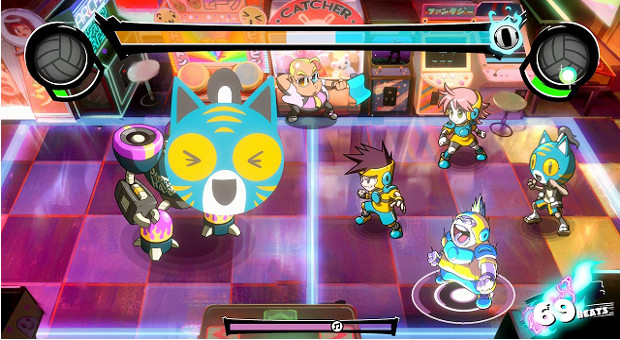 The cat face starts off cute, but quickly becomes something you wish you could get rid of. =>.

Speaking of songs, Super Dodgeball Beats only has 18 of them. For 12 quid, that’s not that much content. There are 3 levels of difficulty, but it’s pretty short, assuming you can even finish it in the first place. Even with a multiplayer option, I can’t really say it’s worth the price of admission.

Naturally, the audio is a big part of this genre and Super Dodgeball Beats has some pretty funky tunes if dance music is your kind of thing. Nothing that truly sticks out to memorable to me, mind, but it’s all good quality. The visuals, on the other hand, are probably the best thing about the game. I’m a sucker for the hand-drawn style and coupled with the bright, disco themed visuals; make Super Dodgeball Beats a spectacular game to watch. Although, you won’t be able to truly appreciate it because you’d be too busy focusing on not missing those beats. Both handheld and docked modes ran smoothly with no noticeable dips in frame rate, which is very important for a rhythm game. 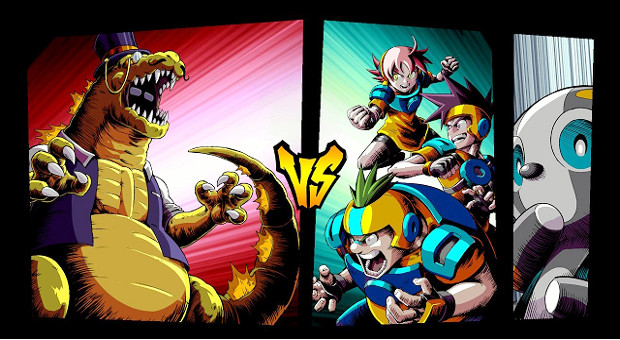 In the end, Super Dodgeball Beats tries to be a tight, yet quirky rhythm game that collapses under its own mechanics, if there was a way to turn off those overwhelming powerups, I’d be happy to give it more praise. But as it stands, there’s probably a selection of better rhythm games out there on the eShop.

Super Dodgeball Beats has a lot of potential with the idea of "Dodgeball Rhythm Game" but with it being a straight Rhythm game brought down with distracting powerups, this game misses the mark and ends up knocking itself out.

The visuals, on the other hand, are probably the best thing about the game. I’m a sucker for the hand-drawn style and coupled with the bright, disco themed visuals; make Super Dodgeball Beats a spectacular game to watch.