It is fair to say that the Nintendo Switch's first seven months have been better than anyone expected. Sold out everywhere, stock in short supply, queues around the corner for the hybrid console, and that's not even mentioning the games.

Amongst a glut of really top quality indie games like Golf Story and Steam World Dig 2 we've had big first and third party games either released or announced. The Legend of Zelda Breath of the Wild, Splatoon 2, surprise hit Mario + Rabbids Kingdom Battle have all been released and sold well, and in the space of one week in November we have Doom, Skyrim and LA Noire to look forward to. Phew, that's Christmas sorted then.

Not quite. Nintendo wasn't content to let Link or the Inklings hold the fort for the rest of the year, instead also deploying their ace card; Mario. Super Mario Odyssey is Nintendo's big Christmas game this year, and could quite easily propel the Switch to uncharted heights this festive season. But after Breath of the Wild was received to such rapturous praise, including a 10/10 on this very site, is Mario's Switch odyssey destined to usurp Zelda as arguably the best game on Nintendo's new console? 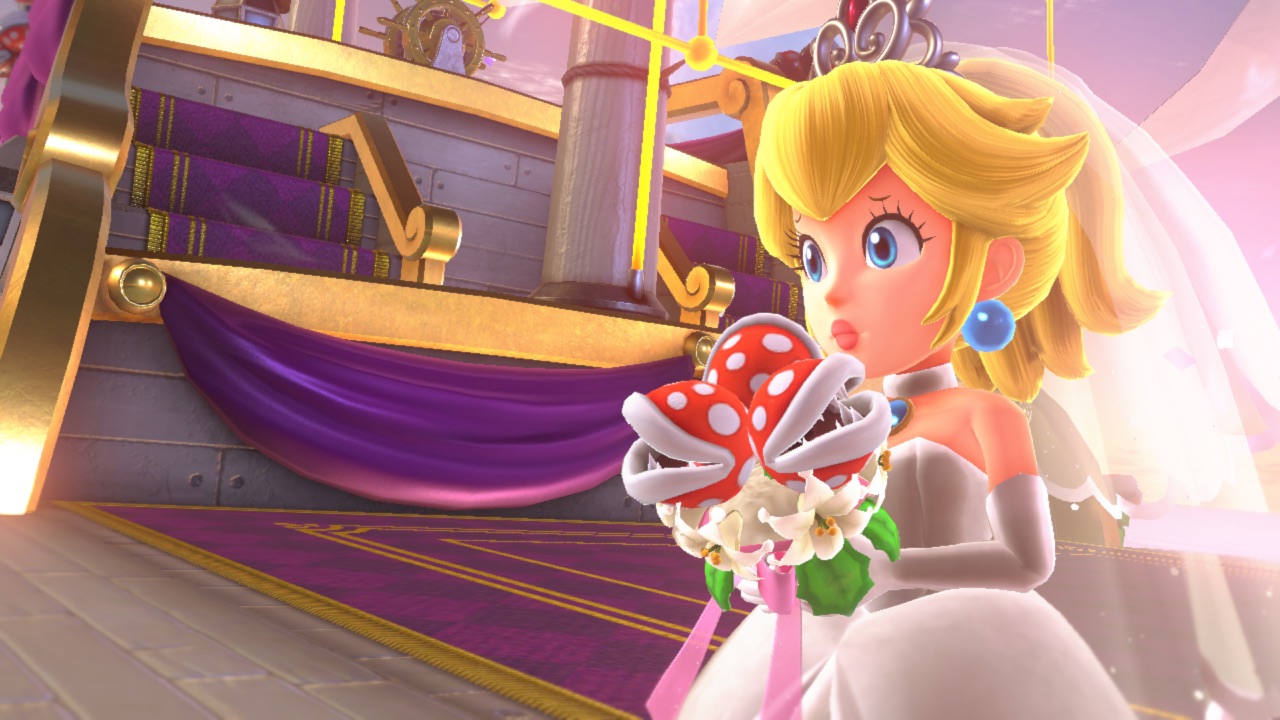 When you first start up Odyssey you are sent head first into the traditionally whacky yet flimsy storyline Mario is renowned for. Seriously, if you are here for story, you are in the wrong place. Peach has been kidnapped again, this time for an unwanted marriage to Bowser, and Mario gamely gives chase. Inevitably his initial attempt is thwarted and he swiftly makes friends with Cappy, who is a ghost-like top hat who magically becomes Mario's new headpiece.

And so Cappy provides the games new "thing"; much like FLUDD in Super Mario Sunshine he provides you with special abilities and opportunities to reach new areas that running and jumping just wouldn't allow. He also allows you to capture almost any good guy, bad guy, inanimate object or, well, harmless frog and posses them, using their abilities whether it be hopping, flying, shocking, trampling or any plethora of means necessary to get the job done. 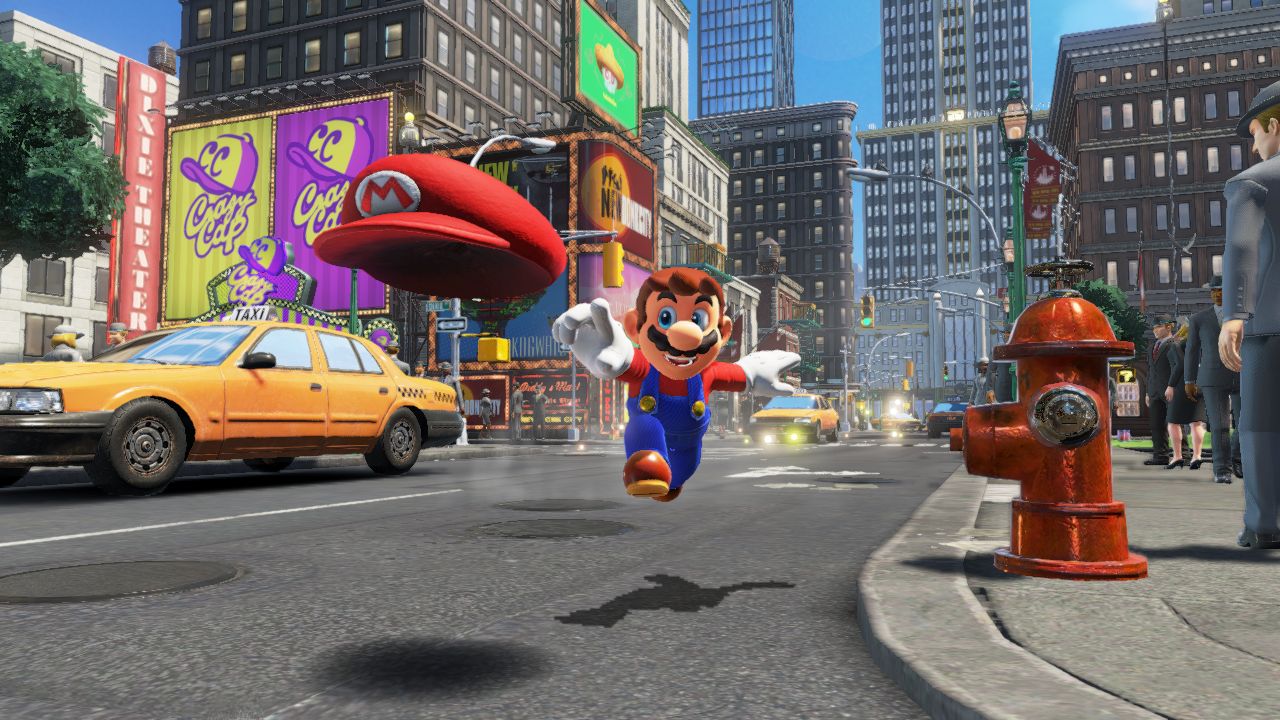 What then starts is, I must say, a quite uninspiring journey through a procession of kingdoms chasing down Bowser as he collects a dress, dinner, dessert and other items for his big day. I know I said the story in Mario games is flimsy, but I found a distinct lack of investment or desire to follow through with it, and the game feels somewhat disjointed because of it. It feels like just a procession of kingdoms without much linking them; say for example the castle in Super Mario 64 bringing all the paintings and worlds together under a common setting, here you fly from one to the next in the Odyssey and that is, initially, it. 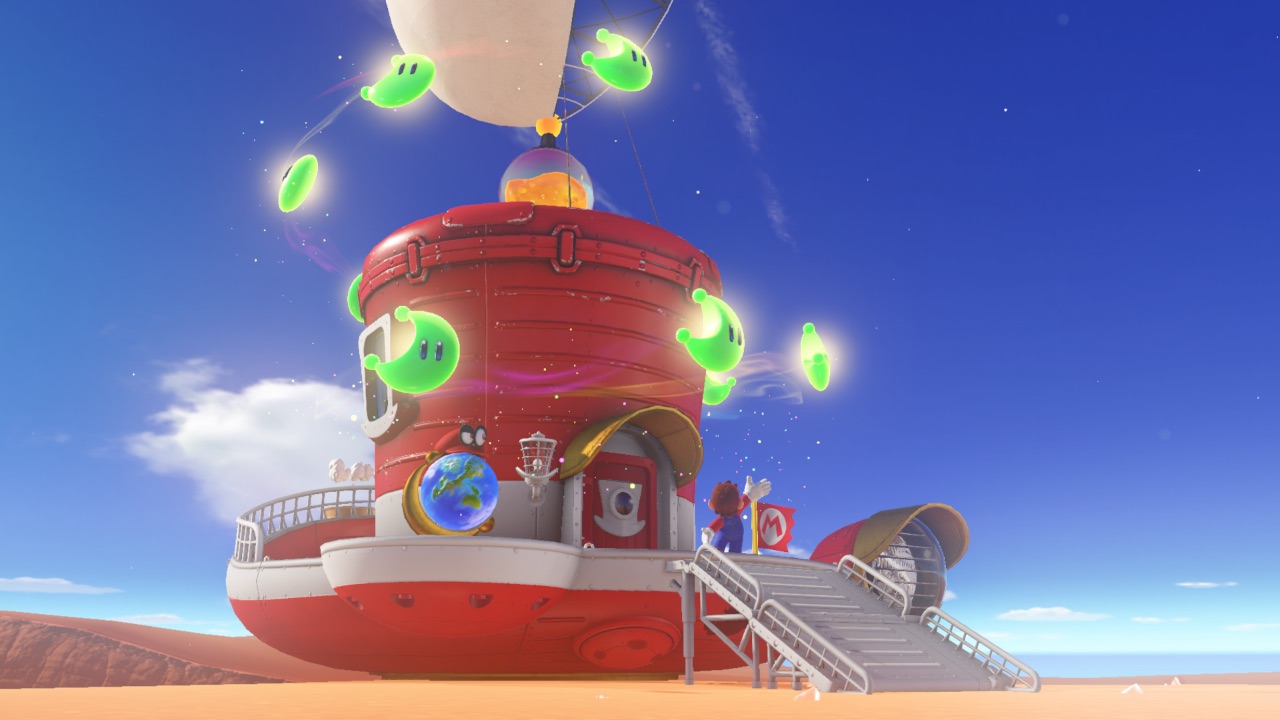 Now don't get me wrong, the worlds themselves are brilliantly designed and a lot of fun to play in. When making my way through the game, I couldn't help but feel this is the perfect evolution of Mario. Remember when Nintendo held the Switch press conference and said DNA from all their past consoles was in the Switch? You have something very similar here from the history of the Mario series in Odyssey. Some of that DNA is incredibly literal, whilst some of it is in a movement, in a jump, in a style of level. The overt feeling I got from the game was a cross between 3D World and Sunshine which, if it wasn't obvious, is a compliment to this game.

However the game feels incredibly easy up to the credits. I know, I know, that's the point for newcomers and a younger audience who might not be looking to get all of the power moons. But I found myself essentially playing Mario-by-numbers and waiting for, but never experiencing, that moment when everything clicks into place and you feel, to paraphrase Mario himself, "here we go!" The capture ability and other uses of Cappy are good, but never quite executed in a way to make it feel like you have been playing every other Mario wrong for the past 32 years. And even once I was in to the end-game, I found myself still just going from world to world and fairly easily picking up moons as I went. 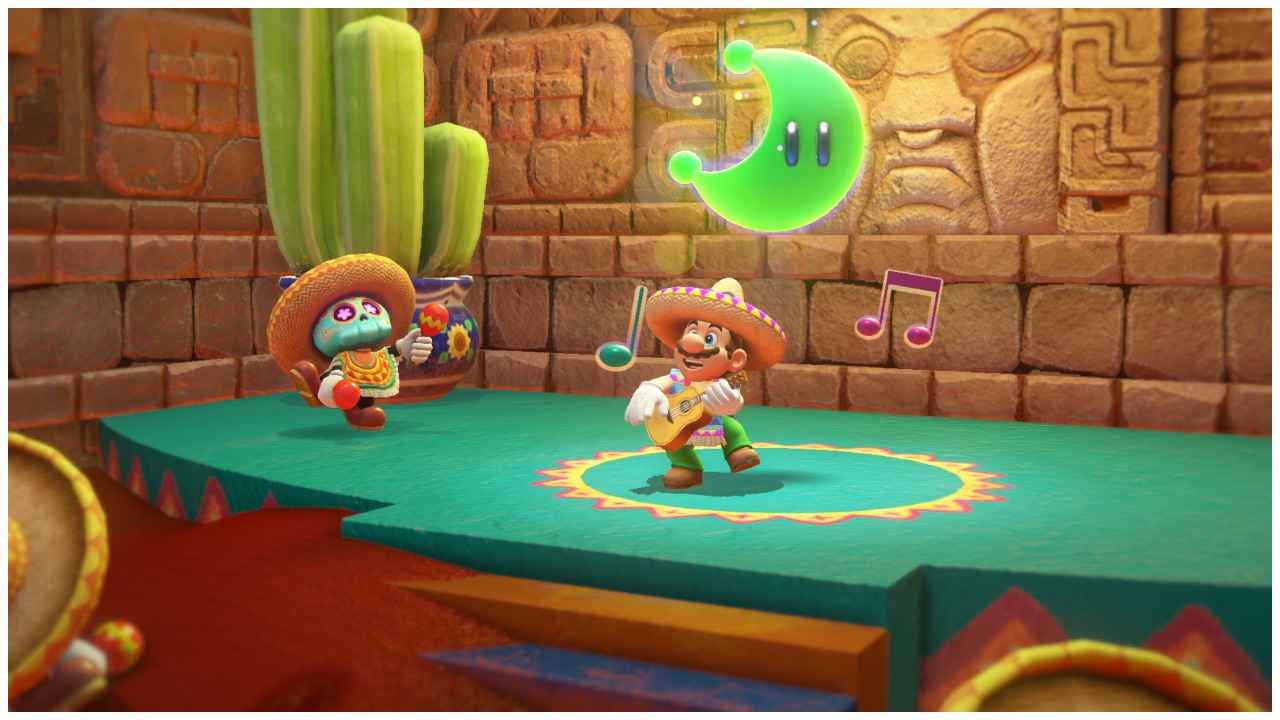 The move to a more open world Mario is something of a mixed bag, with some fantastic set pieces and inventive moments marred by an almost soulless expanse. A good example of this would be the second kingdom, the sprawling desert of Tostarena and the Sand Kingdom, which features some great platforming sections, an interesting town...and also a whole lot of sand and nothingness too. But then you travel to the Snow Kingdom and you get a tight, concise initial over-world followed by something similar inside. The smaller and more focused Kingdoms work tremendously well, it's only when the designers attempt to expand these too far that the game falters somewhat.

One Kingdom that has been shown extensively is New Donk City and it is unquestionably the biggest success of the game. Full of charm, interesting areas and great music, it encapsulates everything great about the game and it does it in the most 'normal' setting Mario has ever been in, replace Donk with the word York and you get the idea. However in case you were worried, Sonic Adventure this is not. 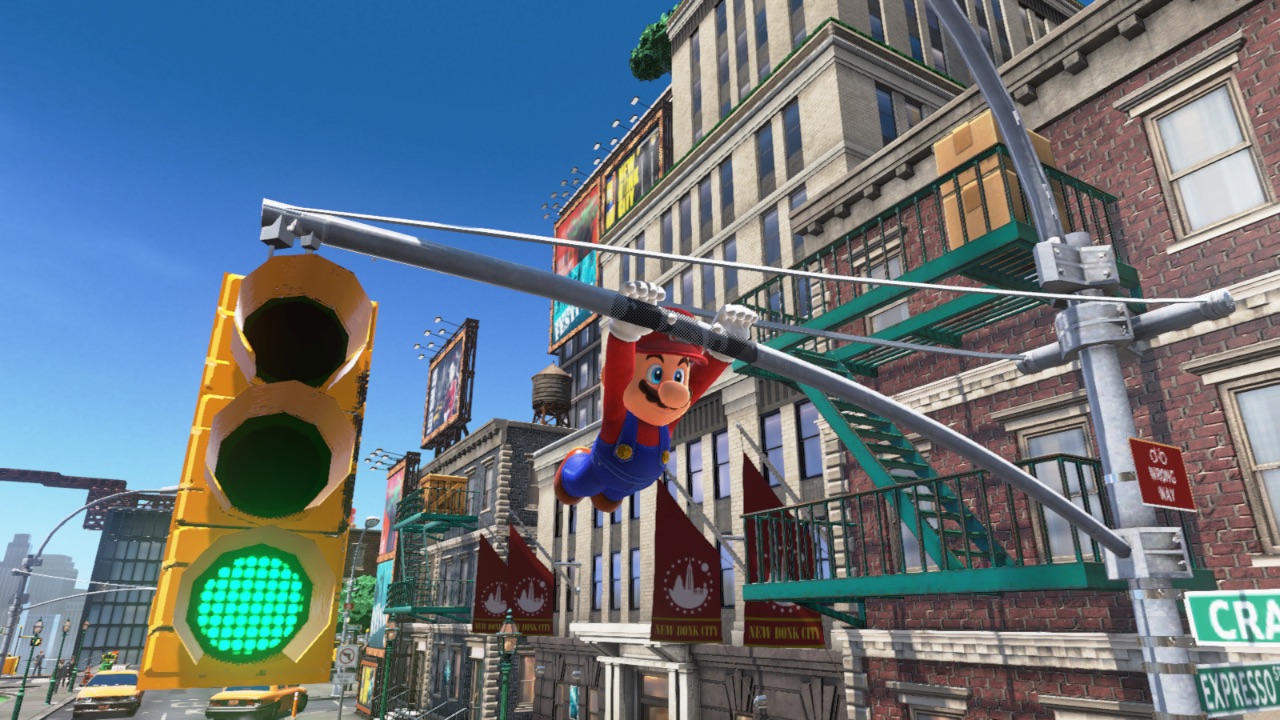 The characters that inhabit each kingdom are serviceable if never completely memorable; there's nothing to compare to the introduction of the Piantas in Super Mario Sunshine, for example. And the Broodals, Bowser's rabbit like henchmen and women, fall flat as a menacing adversary, proving very easy to fight against and very little in the way of personality.

There is some great fan service in the game though, I won't get into any spoilers but the Kingdom you find after the credits have rolled is easily my favourite due to...well, you'll find that out for yourselves.

Something else that does work well is the inclusion of mini-games and online leaderboards. Whether you're skipping, playing beach volleyball or racing Koopas through every level, you'll be attempting to beat your best time and that of your friends and other players around the world again and again. 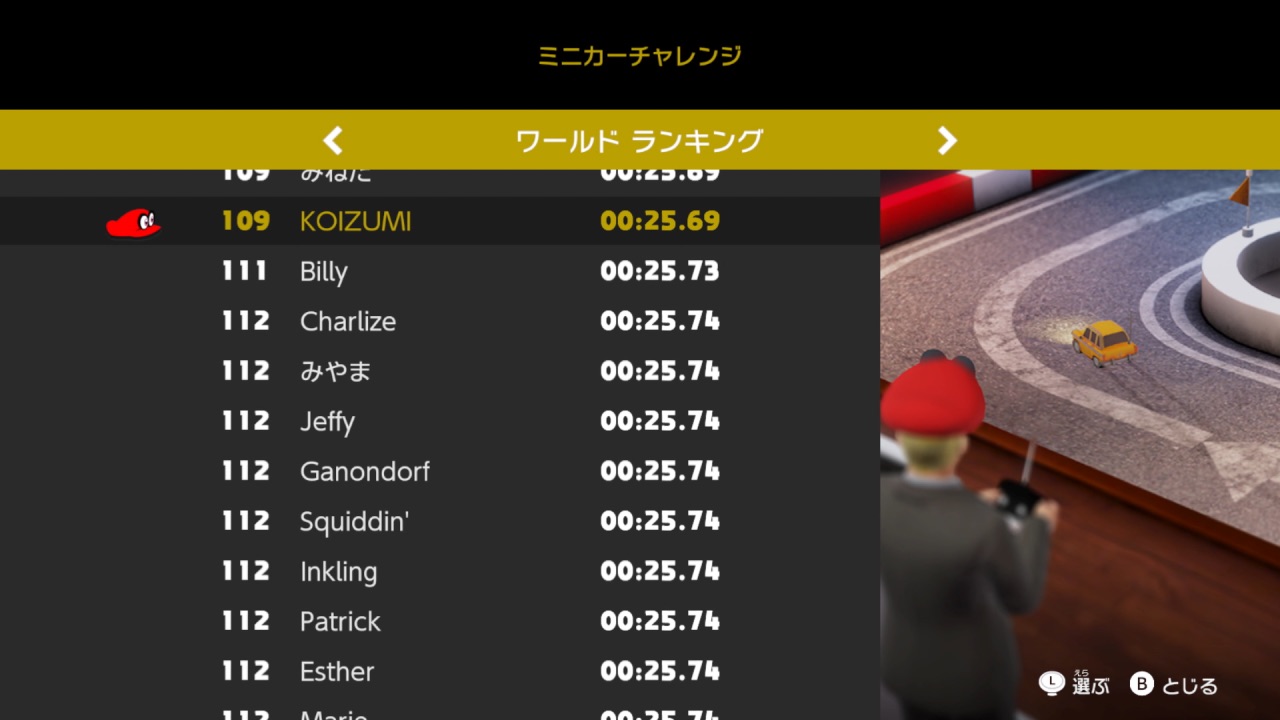 Visually the game is a sumptuous treat; both on the television and in handheld mode it's crisp, sharp and runs super smoothly with no hint of technical glitches. The soundtrack is typically jovial, with toe-tapping tunes that you'll be humming and whistling for days after, and although not many are absolutely classics, the best is undoubtedly the already released and enjoyed "Jump Up, Super Star!" title track which is possibly one of the greatest original songs in video game history.

Mario has never been slicker to control, the majority of his moves are familiar yet also polished beyond previous outings. It can become a thing of pure joy just to hurtle Mario around levels exploring and finding power moons at your own pace. With Cappy on hand as well you have an even bigger play-set from which to delve into, and speed-runners will be pushing limits to get incredible times from this game. 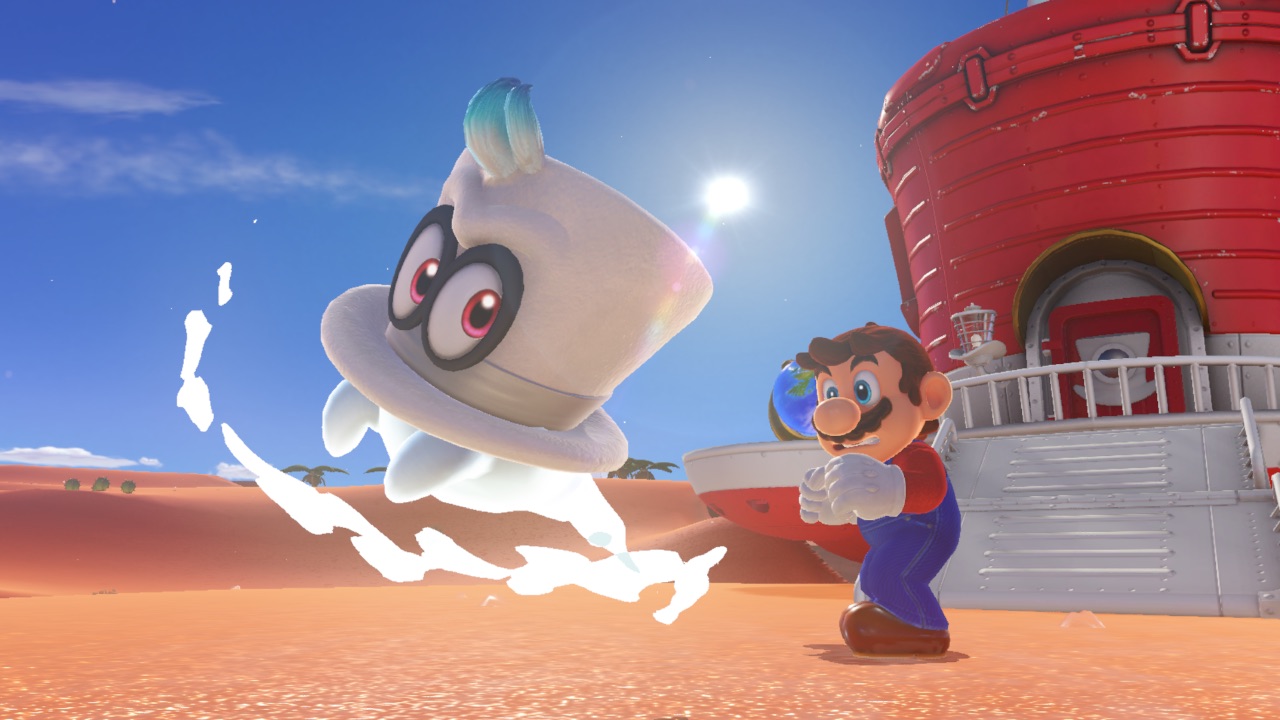 I predominantly used the Pro Controller for my play through which was intuitive and more than a match for what Mario was doing on screen. However, disconnect your Joy-Cons and play free of constraints and you do feel, well, free and almost like you're conducting Mario in symphony. Nintendo makes use of the Joy-Con hardware in a great way that, if not quite revolutionary, certainly adds plenty to the experience. A two-player setup is also an option, with one person controlling Mario and the other Cappy, but after the brilliant mulitplayer options in 3D World this feels like a come down, especially with local connectivity being such a predominant feature of the Switch.

And yet, Odyssey still doesn't quite reach the heights of some of its more recent predecessors, like Mario 64 (if by recent you mean 20 years ago...) or either of the Galaxy games. For the record I am writing this review having collected 300 power moons which has left me seeing the credits and well into my journey into the post-game content (there are 600 power moons advertised), which is by now a Mario tradition. And yet I'm still finding myself frustrated at the lack of...ommph I'm feeling. Perhaps it's expectation, perhaps it's that new Mario games usually signify a huge leap forward for the series and sometimes the hardware itself.

But maybe this is what the Switch invites on itself by being both home and portable console. You need a game that's going to last a lot longer than a traditional experience if you are going to be playing it on the bus on the way home and then on the TV once you reach said destination. Because once the credits roll you are left with some lovely nostalgic moments to enjoy and then, well, a collectathon of power moons. 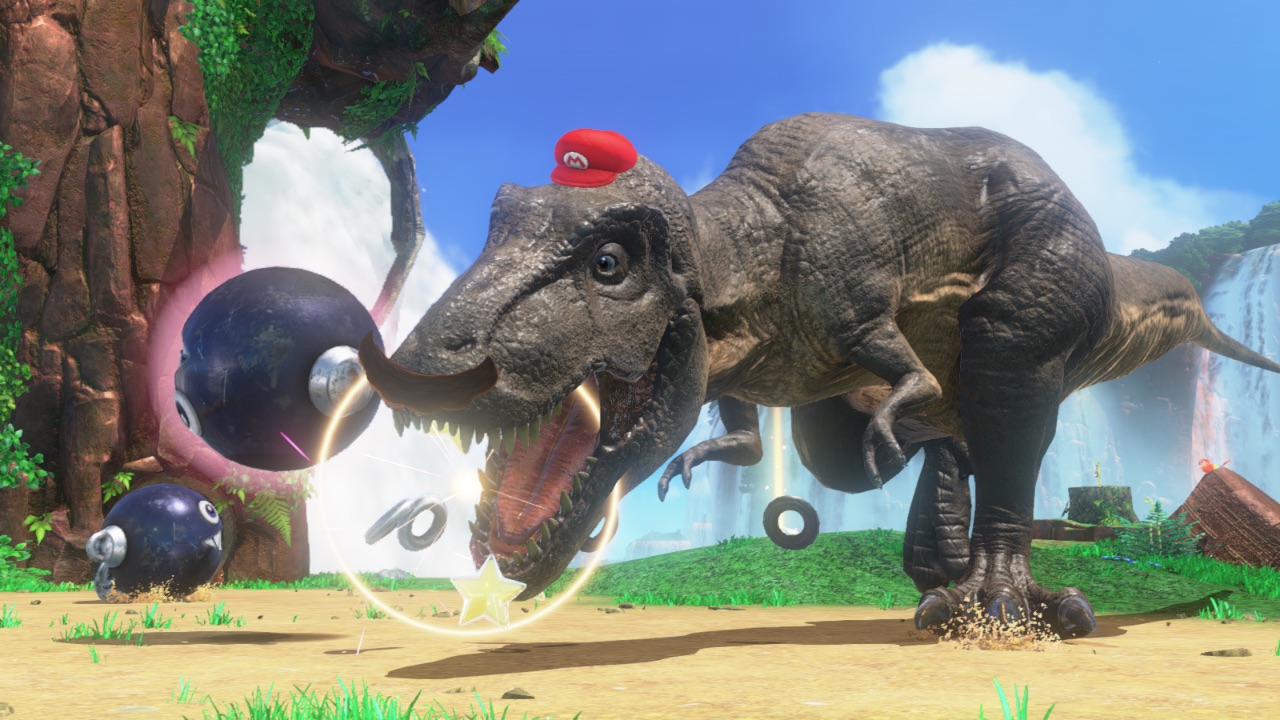 Now don't get me wrong, this is an incredibly good game and a joy to play, and who knows, maybe I haven't seen enough of the post game content, or, at least, had that eureka moment in it when this game goes from being merely great to one of the all time greats. And it must be said discovering new power moons either by accident, intuition, or by following a hint is incredibly rewarding. Because of this I will be going back to Odyssey again and again to pick up as many moons as I can in the hope that I find that moment where it all clicks and I'm reminded why Nintendo is the masters of innovation.

As it stands though, what Nintendo has created here is a fun, enjoyable, and, frankly, great entry into the main-line Mario series that, while lacking some heart or sprinkling of magic that will keep it from being considered an all-time great, is yet another reason to own a Switch or, if you already do, is yet another game to add to your Switch catalogue. Now don't just take my word for it, go and do the Odyssey and see what you think.

It's Mario, but not quite as we know him. While this game fails to break out of the shadow of its predecessors, it's still a great game in its own right and a brilliant addition to the Switch's library. Just a bit more of that illustrious Nintendo magic and some more soul is all that's missing from Mario's first foray on the Switch, and even then it still stands tall against most other software released this festive period. A must have whether you're playing at home or on the go.

Doesn't live up to previous Mario greats
Some open world aspects don't work as well as they should
Boring story, even for a Mario game
Too easy to reach the credits
Missing that Nintendo magic and soul

Mario has never been slicker to control ... it can become a thing of pure joy just to hurtle Mario around levels exploring and finding power moons at your own pace