On its surface Tallowmere doesn’t look like much. It’s simple art style feels ‘basic’ rather than ‘delightfully retro’ and the sound effects aren’t going to win any awards. However, much like the hero of the game - the further you go the more you discover.

Procedurally generated roguelikes aren’t that uncommon now, but Tallowmere manages to stand out for its sheer depth. As you pass through each room you uncover new enemies, new weapons and their difficulty increases. You will have to play through it a few times for it to click, but once it does Tallowmere will have you coming back for more.

The basic premise is fairly straightforward - get through as many of the randomly-generated rooms as you can. However, the devil is in the detail. You can of course block and attack as you’d expect, but most interestingly you can jump forever (it feels very Kirby). These simple actions become more necessary as you go - enemies will move more, their projectiles more dangerous and their numbers greater.

At first you are likely to just slash your way through occasionally using the shield, but the further you get (and the further you want to get) the more you have to learn to not only attack but block and make good use of the other weapons and items lying around. 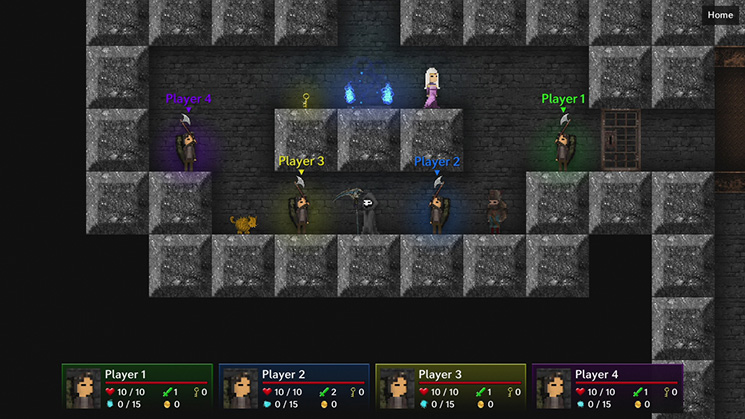 Treasure chests and temporary bonuses will give you new weapons, more health, more speed and allow you to cause more damage. Some of these can be purchased from the travelling merchant that pops up, but by-and-large you’re at the mercy of the algorithm.

You can, and probably will, just start the game without exploring the various modifications you can apply. After a few goes you might return back to the hub whereby you can meet various characters including Lady Tallowmere after whom the game is named and who you are trying to help. While you are crawling through the rooms you will come across warp points that let you come back to the central room where she will heal you and it becomes a balancing act of trying to progress as best as you can and making wise use of this option.

Amongst her is a motley assortment of individuals, ranging from Death himself who allows you to add ‘punishments’ to your run (basically self-imposed handicaps on speed, health, enemies etc) to a character that will slaughter kittens to make the game easier. Yup. Slaughtering kittens. You start with 9 kittens and you can slaughter any number in order to increase your Max Health, although it does shame you by adding your score to a different leader board and prevents most in-game achievements. It’s an interesting mechanic to allow players to level the player-field a bit, even if the method is macabre. 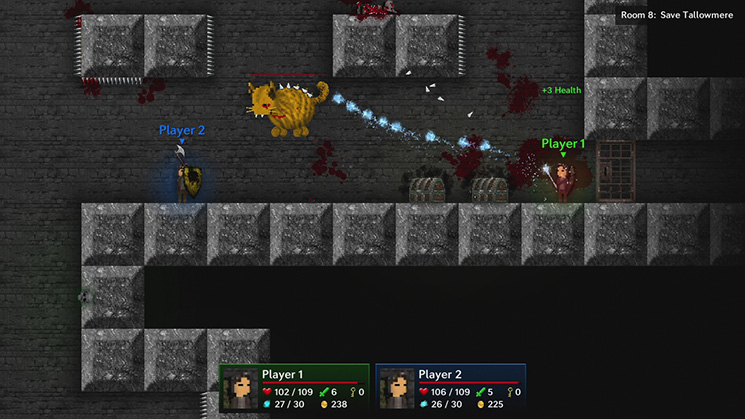 You can also partake in various challenges to mix things up. It is fair to say that while on the surface Tallowmere may seem pretty basic, there is a hell of a lot more than meets the eye and it is no wonder people are eagerly awaiting the sequel Tallowmere 2: Curse of the Kittens.

You can also grab a few friends and play together as up to four people can try and make their way through the dungeon together.  If you can grab enough people it adds a good variety to the challenge and is thankfully forgiving enough that you only lose when you all die and pick-ups are shared between everyone.  However it's not all kittens and kindness as enemy strength is also multiplied by the number of players, meaning that teamwork and communication is key.

While the game’s mechanics and gameplay are solid, there are presentation issues. Given it was made by just one person (Chris McFarland) it is one hell of an achievement and the lack of polish is easily forgiven. The graphics and sound are not the best by any stretch of the imagination, but once you’re in the zone and trying to get your best score you won’t care - plus the simple graphics do help you focus on the task at hand. 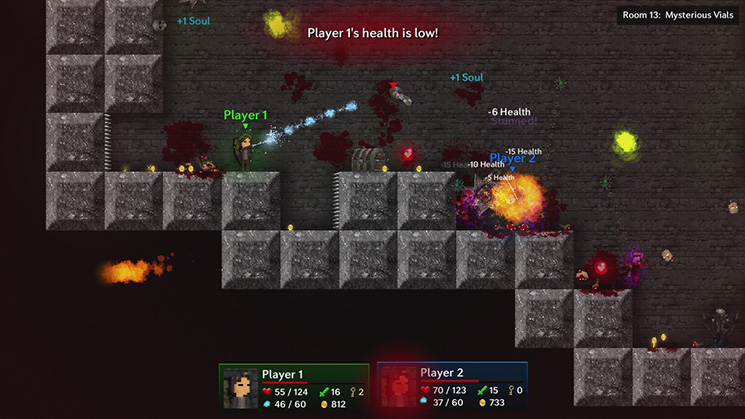 The UI is another element that lets Tallowmere down. The game was originally designed for PCs and you can tell. The UI design itself is basic, but the worst part is the game text can be quite small. It’s not so bad on the Switch in handheld mode as you’ll have it close to you, but if you’re viewing it on the TV you may find it difficult depending on how sharp your eyesight is.

These issues are however minor compared to how solid the game itself is. It is not going to be for everyone, and honestly it's not the kind of game I normally play too much but there is something compulsive about its core gameplay. If you’ve not played it on another format, or if you want something that can be played in short bursts (each room takes about a minute on average, although this increases as you get further and it becomes more difficult) then it is worth picking up Tallowmere.

A rougelike with a hell of a variety of challenges underneath its surface. Tallowmere is a game that will keep you coming back for a long time once it clicks.

UI is difficult to see
Graphics/sound take a back seat

It is fair to say that while on the surface Tallowmere may seem pretty basic, there is a hell of a lot more than meets the eye