Just like 90% of the early 1990's populace I adored the Turtles franchise and although Europe wasn't hard enough to get 'ninja' Turtles (just Heroes) the franchise was a bodacious hit back in the day. Fast forward to today and Europe is now hard enough to accept the word ninja and the abbreviation TMNT has become the norm. Adapting to today's society the Turtles are more mature and a million miles away from Cowabunga and Tubular 90's social slang, but surprisingly they've never been closer to their comic book heritage than now.
As GameArts and Ubisoft hooked up with the original comic book creators at Mirage Studios TMNT fans felt like they would get a title that would truly celebrate 25 years of Turtles heritage in pure Smash. Bros. style. But how has it all come together? I put down my TMHT action figures (with blimp) and took the plunge...

The Turtles franchise has proven in the past that it is a great vehicle for a beat 'em up and the extremely fun Smash Bros formula seems to be one which would suit the multiplayer style of a Turtles game alongside the coming-together of a 25yr timeline. So you can imagine my delight when I got to smash Shredders face in with Casey Jones. Take that Tournament Fighters!TMNT: Smash Up certainly appeals. It sports the basis of one of the most feature-filled Wii games of this generation and manages to offer more options than any previous Turtles game. Yet aiming to mimic Smash Bros. has only left TMNT: Smash Up with some glaring omissions of its own. You see the title feels like a first step in comparison to today's 3rd Smash Bros. title. To compare TMNT to the original Smash Bros 64 would be the more sensible comparison as this feels like a blueprint, a first foray into an arena in which can only grow. Unsurprisingly you'll immediately get this impression when you see the presentation and the roster of characters available. With the TMNT franchise having been (at one point) a ludicrous money-making machine there are plenty of characters to draw from so it's a shame that many of the 1990's main characters are missing from the title. It almost becomes too much to bear when you come to unlock more characters only to be let down each time. Sure there are a couple of mild delights in there (which we won't ruin) but when it comes to unlocking three Ubi Rabbids you feel like someone took a dump on the Turtles franchise from high above. Probably from an executive position no doubt.

We're passionate about the franchises we grew up with and it's a bitter pill to swallow for any long-time Turtles fan purely because it just doesn't make sense. The TMNT franchise (as diluted as it may have become) is leagues above cameo characters - and three of them?! Overall presentation is a letdown too with lacklustre, drab greys and a dreary menu system taking the sheen off the title before you've even entered a fight. 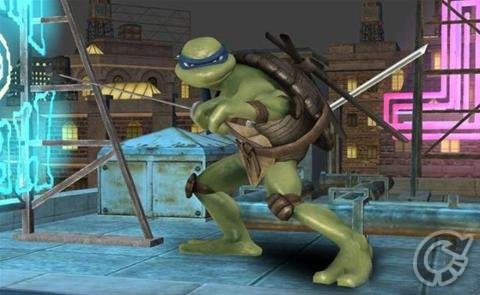 But to focus on those negatives would be to deny Smash Up any credit as there are moments of pure affection buried deep in this shell. One of the best things is the cutscene direction which is excellent using comic book presentation elements that suit the tone of the subject material very well. It would have been easy to appeal to FMV junkies but this style suits the Turtles heritage and is refreshing in a fighting game. The story mode in general is also well thought out even manages to throw in a few twists along the way. By keeping the story simple it remains focused and memorable (something Brawl could have done with). Other modes such as challenges, trophy modes, multiplayer and tournament modes are so similar to Smash Bros. Brawl that we need not pick them apart. Put bluntly many of the modes are exactly like Nintendo's own and work as well - which is great news for gamers who have mastered Nintendo's fighter yet seek an alternative.

Not to sound like this review is a comparison piece to SSBB but it is perhaps where Brawl stuttered that Smash Up really sparks to life: online. The online games I played were lag free and were great fun. The difference between online and offline play were seamless and with the ability to enter and create tournaments with self-created trophies up for grabs I can see this mode lasting a long time indeed.

Unsurprisingly I have left the most important part of this review until the end. The fighting mechanics themselves. Again if you were to imagine Smash Up as a pure Smash Bros. Brawl simulator you wouldn't be far off. Each character sports a strong and normal attack with a mixture of the two with directions creating combos. 'Smashing' works just like Smash Bros. and pressing both attack buttons together will grab your enemy. It's extremely accessible yet each character offers a depth which long-time play slowly reveals. Donatello's Bow Staff coupled with the staple speed of the Turtles makes him specifically dangerous yet all of the Turtles are unique enough to be well balanced. Characters such as Casey Jones are slower yet more powerful and others like April and the foot ninja are super speedy yet cannot take much of a beating. The roster manages to offer a decent choice of fighting styles without going that extra mile which perhaps characters like Baxter Stockman (in the vein of Meta Knight) could have offered. Still, you won't be complaining too much when you are air-dodging flying kicks, leaping from walls all whilst re-living that epic Leonardo VS Raphael fight.

Controls are responsive and minimal with the only minor gripe being an over-reliance on motion to recover from being stunned. Shaking the controller (or rotating the analogue stick with CC or GC controllers) was off-putting as it seemed to break up the flow of the match for me.Yet for the most part I was suitably impressed especially when you throw in the fact that controls are 100% customisable. Again, when you can only compare Smash Up to one of the best brawlers in years you know it's doing something right. 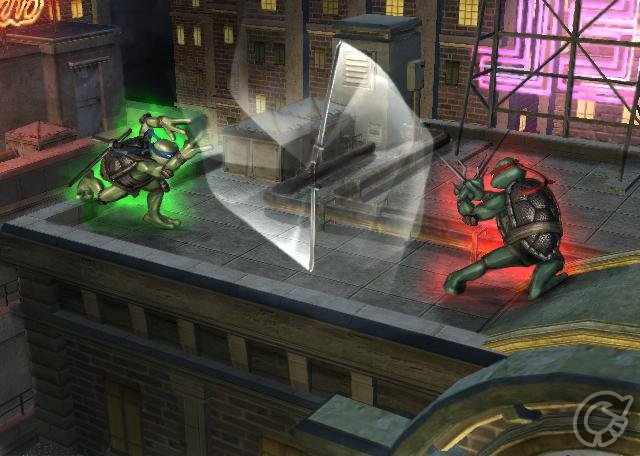 Yes, you can turn the 'aura' off (which visually represents your energy level)

Finally, winning matches focuses on draining your enemies' energy to 0% as knocking them off the stage or ensuring they are eaten by an onstage hazard is tougher than it looks (especially on the higher difficulties.) Fights are also spiced up by ninja powers which appear from crates or randomly appear and range from specific elements surrounding your character (wind, electricity) to a specific move like breathing fire (?!) to throwing bombs. I liked the fact that you could call collected ninja powers into play at any time adding a somewhat tactical nuance to matches. It's a nice nod to Brawl's final smash and certainly makes for manic moments of crate bashing. Throw in a nice tag-team mode in which you can use two characters for team-up moves and you've a few alternatives to the Smash Bros. formula.

TMNT: Smash Up is a unique title to rate as it offers a foundation so similar to the original Smash Bros. which makes it difficult to take on its own merits which includes fully destructible, engaging environments and a fine-tuned online mode. TMNT: Smash Up goes on to offer depth on the battle field yet off it it seems to suffer from a lack of staple brawler needs such as a deep character roster and choice of arena. The franchise is ripe for a fighting game in this mould (and we hope we see a more feature-filled sequel) yet the lack of options stand out when put alongside other fighters – especially Smash Bros. But to even get close to the title it is seeking to imitate means that TMNT: Smash Up is a good alternative for those who like their fighting games a little greener.

TMNT: Smash Up does so much right in the ring that it's a shame that it is sucker punched by a shallow character roster, lack of battle arenas and poor presentation. This Turtle is certainly wet behind the ears