The Adventures of Elena Temple

Review: The Adventures of Elena Temple

You never forget your first experience of playing a videogame. I can still remember playing Burnin' Rubber on the Amstrad 6128+ personal computer which we were lucky to own at the time, which then of course led to me playing lots of other simple but enjoyable titles. The entire games industry was different back then and I consider myself lucky to have grown up during such a defining era. Games might have been much simpler back then but they had real gameplay and offered a lot in the way of fun, which is a lot more than can be said for some titles these days from huge publishers who seem to have forgotten their humble roots long ago, much preferring to sell you titles piece by piece... *grumble grumble* [/CrankyKongStyleRant]

Fast-forward a fair bit and there has been a quiet indie revolution going on, things thankfully seem to have come full circle with more people making their own games than ever before.

The Adventures of Elena Temple released in 2018 has been made by just one person; Catalin Marcu aka GrimTalin. The developer resides in Romania and has created this title as a long-term goal which has followed on from developing other smaller games over the course of ten years. Of course the music is created by The Indie Devs Nation so that's the only concession. On with the story... 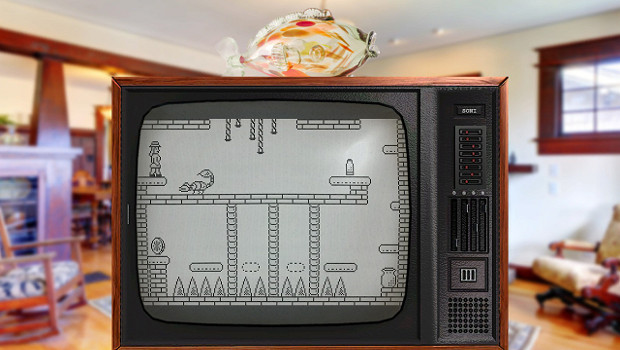 Check out that Soni CRT TV! I'm sure I used to have one like that... Watch out for that Scorpion.

As she uncovers the secret underground entrance, the renowned explorer Elena Temple feels ready for her biggest adventure yet. The lure of gold and precious gems overcomes the fear of the unknown as she falls into the pit. She is late to realize that the way into the dungeon is not also the way out. Her focus is to find an exit, but she'll be sure to get rich while doing it!

Well, time to get platforming then. Armed with a pistol which can only shoot two bullets before requiring reloading with the carefully placed (and wonderfully animated) ammo pickups you can opt to shoot snakes & scorpions before you come into contact with them. Or you can save your ammo for the various vases which litter this lavish and clearly Egyptian inspired underground maze. Because you don't know where your next collectable coin might be hiding. 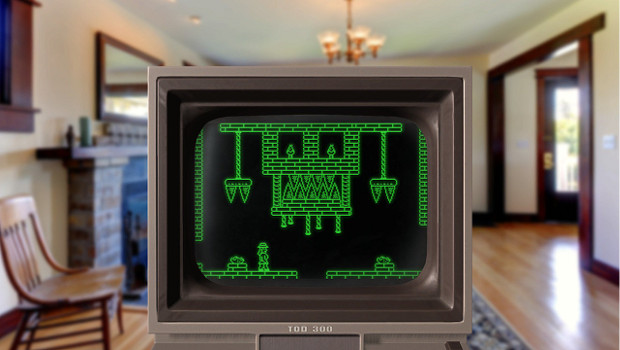 Do not adjust your set! This is indeed a Green Screen... red & blue cost extra back then you know.

This currency serves a purpose within the game as well, in addition to the gems as you will require a certain amount of them to progress beyond points which are blocked off by an effigy guarding the way until you show it the money as it were. So you will need to also use your platforming skills as your only other ability is to jump. As you try to navigate moving platforms, circular saws, spikes, pits and even arrows, as you attempt to not die in the process. Though if you do, it's not a huge issue thankfully as you will just restart from within that same room.

Just under fifty different rooms make up the play area you'll need to traverse to escape. You can see your progress at any time by making use of the map and the more you play, the more of it you will uncover as in time you'll be able to make more sense of it all if you manage to collect certain treasures along the way.

Indeed it's quite easy to find this game to be rather theraputic when you can tell that a room is completely clear, allowing you to move onto the next one which may well contain another mini puzzle for you to ponder over. Some of the rooms are quite simple but as you progress, there are more switches (no not that one!) to activate through various means, which in turn will usually grant you with an "aha!" moment as you figure out how everything connects with many shortcuts to find in the process. 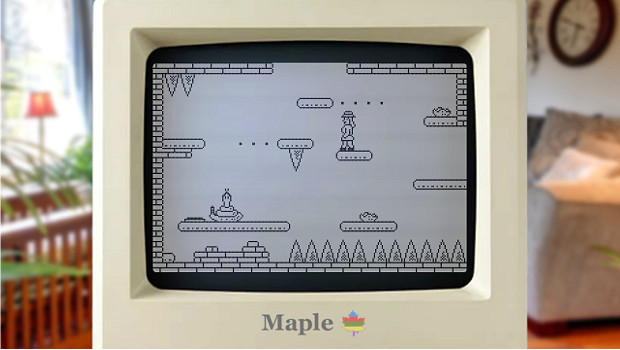 Everyone remembers the original Maple computer, many a company took a leaf out of their book.

It's possible that if there are any younger gamers who might not have played anything like this before, then they might become a little frustrated at how you can get stuck if you don't figure out how to work within the limitations of this title. I would like to think that there are plenty of people who will take the time to play and figure out this small but charming puzzle of a game as it really isn't too taxing from a long-term gamer's perspective yet it is very rewarding.

Of course, that brings us to the question of; who exactly is this game for? I would like to say that players of a certain age group from mid-Twenties to Thirties will probably get the most out of it. Being that this game did originate on Steam and the Itch.io platforms with it being ported to the Switch later though, suggests that GrimTalin would very much like this game to reach a larger audience. While I would like to personally say "Thank You" for creating such a title, I feel as if I would enjoy this game if it was released in any format without any bells & whistles even. Hopefully younger players will give this game a chance as well, especially as I like the idea of them possibly playing this as one of their first forays into the world of gaming. 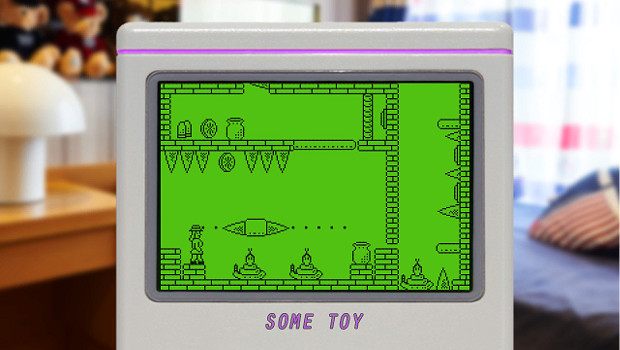 Nothing to see here, just Some Toy... nothing revolutionary in the slightest. (Snaaaaaaakes!)

There are several retro "filters" which can be selected as you load up the game, each one comes with an interesting write-up on this games fictional history which is really above and beyond in terms of presentation. Upon selecting your computer or games console of choice through the ages, you'll hopefully be able to notice all the visual differences such as the game being presented in monochrome, green-screen or even having a limited colour palette when it comes to the later machines. Differences in the audio will occur as well which adds another element of immersion and nostalgia to the proceedings, especially when playing on one of the Game Boy type devices.

Visually overall there is a lot to love as it never feels as if the stlye ever goes beyond the level of detail required for its style of gameplay and so stays authentic to the era of games it's trying to portray, with all of the various faded-out backgrounds adding a unique border-style effect which works well on the big screen and even when playing in portable mode, the screen ratio changes to a more comfortable size in addition to adding to that surreal feel as you play a game which is based on titles made in the Eighties, on modern hardware in 2018 but through a filter based on a computer from the Nineties to early turn of the centrury. It's a bizarre but cool feeling which is unique to this title and it is something which wasn't lost on me as I played through the ages once again. 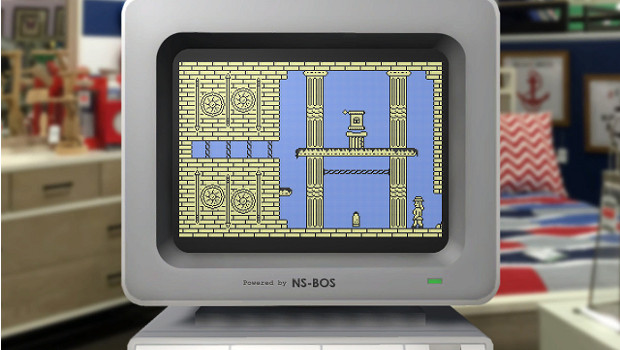 Powered by NS-BOS, none of your fancy GUI's or standlone Applications here thank you very much!

A special mention definitely goes to the team behind the music, it seems that The Indie Devs Nation supply music through the asset store on Unity so I suppose even though it's possible that you might hear the music used in this game elsewhere, it was the first time I heard it and I felt that the music really fitted the style of game perfectly. There's also the adaptive element of the soundtrack to consider as the overall sound changes between the different "systems" you're playing the game on, plus it seems to change as you get further towards the end, even though the music is looped to a degree, it's still done in a clever way. All of the sound effects are perfectly suited as well, especially the death noise which is one of the best I've heard in years... which sounds odd but it's just one of those simple things which makes a difference, especially as it will likely happen a lot as you play.

While I did experience a few minor annoyances during gameplay, it looks like some of these will be addressed pretty soon, such as certain aspects of getting a little bit stuck inbetween certain moving platforms, which even then still doesn't make the game impossible. I would have also liked the ability to start the game again without deleting the save file, it looks like both of these things seem to be changing in a statement from the developer themselves which I have included below. This only happened very recently so this is the slight silver-lining of a review coming along a bit later I suppose when you have games being updated soon after their release, though I must stress that the game still felt complete to me, so this just seems to be a well-timed improvement patch coming soon. 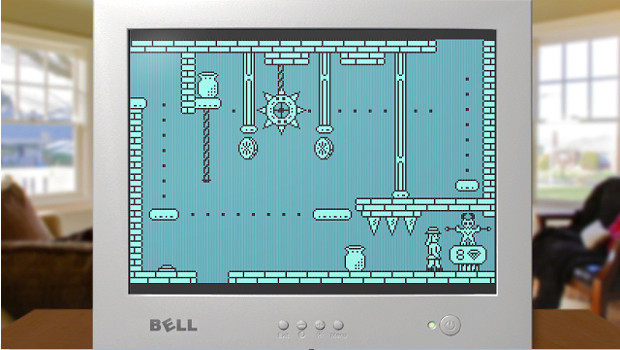 You're not getting any computer, you're getting a Bell!

The biggest feature in Update 1.1 is the Stats screen inside the Options menu, where you can check out various info such as your playthrough time, how many times you've died so far, how many rooms you've fully completed, how many enemies died of your bullets and so on. Each stat has a value for the current playthrough and the best value over all your playthroughs. And that's not all! To give you an extra reason to start the game again once you've finished it, there are also medals to get for each stat, so sharpen your skills and try to go for the fastest time, fewest deaths or embrace your peaceful side and dispose of as few enemies as possible!

Update 1.1 also contains new unique music tracks for the final rooms and for the secret areas. And a few tweaks and bug fixes, like all updates should include.

This is a most welcome addition to the Nintendo Switch games library, my only hope is that enough players get to experience it amongst the avalanche of indie titles we seem to have gotten within a very short space of time. Be sure to give this fantastic Indiana Jones inspired title a try, with some Pitfall type gameplay thrown in for good measure amongst other influences, who knows? You might just fall for this excellent adventure just as I did.

The Adventures of Elena Temple isn't just a fun throwback to the glory days of gaming, it's an enjoyable title in itself which I'm glad to see released in this modern era. This fantastic indie title is well worth owning on the Switch as while it is short, there is nothing here which has been overpromised at all. So if you're in the mood for a great new but "old" platforming title which only asks you for a relatively small amount of money and your time then it is very hard to go wrong with this one.

Takes you back to the "good old days"
Enjoyable traditional gameplay
An accomplished accompanying soundtrack
Doesn't outstay its welcome though...

...it is short *shrugs*
Mechanics might catch you out
Little replay value (currently)

I would like to say that players of a certain age group from mid-Twenties to Thirties will probably get the most out of it. Hopefully younger players will give this game a chance as well, especially as I like the idea of them possibly playing this as one of their first forays into the world of gaming.