Nintendo gamers have been spoiled this year with a brand new console and a revision of the Zelda series that set new standards for open world games. In the meantime, renowned RPG developer Bethesda announced plans to bring the latest numbered iteration of its famed Elder Scrolls series, Skyrim, to the machine. The question on many gamers’ lips was “Is there room for both?” The answer is “Yes, absolutely”. In some ways it’s better.

To say Skyrim starts in dramatic fashion is an understatement. Right from the beginning, you are drawn into its world, with some of the most impressive in-game storytelling in the industry. At first you have no idea who you are or what’s happening, but after creating your avatar with a bar-setting level of customisation, it soon becomes clear that there is some very unpleasant business afoot. In a baptism of fire, you find yourself having to learn the controls and game system on the hoof, which I don’t mind admitting had me running around clueless for a while. It might be overwhelming for those who just want to hit three Slimes with a Cypress Stick.

But as complex as Skyrim is, it’s also forgiving. You’ll soon learn the system of following markers, working in real-time with NPCs, sneaking around and engaging in simple combat. The left and right hand can block or attack independently (with ZL and ZR respectively), meaning to a certain extent you can play as defensively or as aggressively as you like. It may not pay to simply attack every enemy.  Whether you prefer the immersive 1st-person mode or the easier, more enjoyable 3rd-person view, the choice is yours. 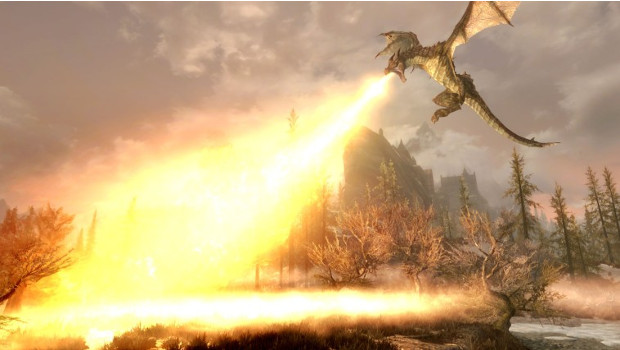 It should be pointed out that Skyrim is a violent game, featuring gory decapitations and slaughter from the beginning, and as such won’t be to everyone’s taste, especially if you are mainly used to the titles typically released on Nintendo’s machines. It’s not out of line with the PEGI 18 rating, but an option to turn off blood would have been considerate.

Once out into the open you get a sense of how enormous the game world is. Bethesda has taken great care with this port, and as such it runs like a dream.  The incredible graphics serve as an example of how good the realistic style can be, and it’s hard to believe what you’re seeing when playing in handheld mode. We’ve certainly come a long way since Tetris. Limitations do become slightly more apparent when played on the big screen, particularly with textures and polygon count, but you’d have to look carefully. Audio is subtler, but the music is always appropriate to the action, with effects and voice acting particularly dynamic as the NPCs move around you. It can be somewhat confusing, but thankfully there is the option to display full subtitles.  There are also rudimentary motion controls, which mainly cover the difference between left and right, and the difference between a normal and strong attack.

Skyrim is best played at a steady pace. As well as following the main story, it’s advisable to get a good feel for the villages, practice skills such as blacksmithing and, most importantly of all, seek out the smaller quests. You’ll soon find yourself in caves full of monsters, and it’s here where the game really shines. 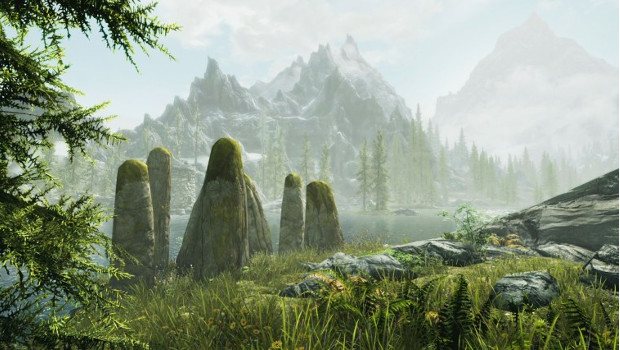 The combat is intuitive and the level of customisation scratches an itch that only a true RPG can. Multiple skill trees mean you genuinely can sculpt the type of character you want to be. As well as using the standard sword & shield combo, you can be a distance-keeping archer, an ice-wielding mage or (my favourite) a finesse-lacking oaf with a two-handed axe. Weapons generally don’t break, and so picking up a better one gives a real sense of satisfaction and progression. The visuals are so hi-def, meanwhile, that puzzles are solved by picking up subtle clues in the environment.

Skyrim is full of so many settlements, you will have a much better handle on the game if you take time to explore what they all offer. This does mean you can’t really play the experience at a fast pace, lest you become very confused indeed. You don’t so much enter towns as become enveloped by them. When I discovered the game’s main hub, I found myself hoping no one had lost any chickens.

If you’re not careful, you can find the game progressing before you feel you’ve got to grips with it. Quite early on, I was forced to confront a dragon. After defeating the beast, I was hailed as some sort of hero, when in reality all I’d done was swing an axe at it. Like most games, Skyrim is better if you take time to learn how it all works, but unlike a traditional, tight RPG, there aren’t as many barriers and tests to keep you on the right track. The autosave system, meanwhile, triggers at most important events, but you can still lose a lot of progress if you don’t make good use of the manual save as well. 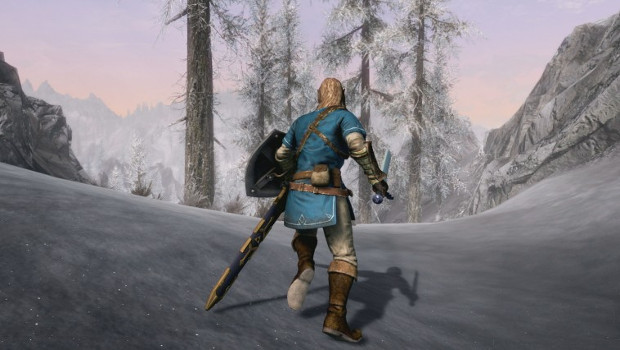 Now with added exclusive Zelda-themed content, which makes everything better.

Being such a big title, there is also a bug or two. Save too close to a large enemy as it’s about to attack and the game will assume you cannot claim victory from that position, forcing you to reload from an earlier starting point. Another time, I was following an NPC on a long journey, when she suddenly disappeared from sight. I didn’t know whether it was a glitch or she was demonstrating some vanishing magic.

The biggest objective flaw, though, is that being based on an Xbox 360 game, Skyrim does feel old-fashioned in certain areas, never more so than in its terrain navigation.  Although not strictly a mountaineering simulator, you sure climb a lot of big hills. It’s not clear which slopes you can get up and which you can’t, meaning you sometimes just have to shove your avatar in the right direction and watch as he or she awkwardly tackles a precipice that Link would have zipped up. 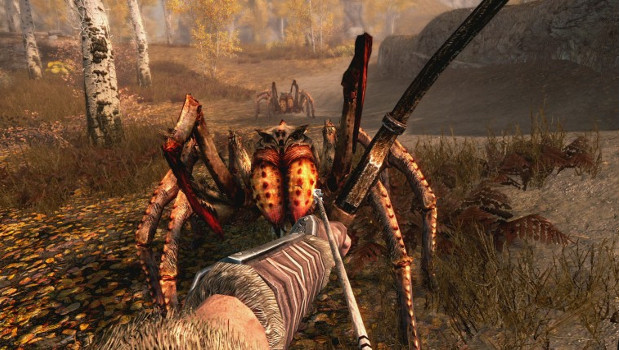 Possibly not suitable for those who are of a nervous disposition.

Indeed, the elephant in the room is the existence of Breath of the Wild, but Bethesda has not shied away from this; in fact, they’ve embraced it. Hidden away atop one of the mountains is the Master Sword, Hylian Shield and Champion’s Tunic, the latter of which looked rather fetching on my shaven-headed brute. There is a question of whether the Switch needed two huge open world games so early, but in fact, Skyrim is most recommended to those who loved Link’s latest adventure; rather than those who prefer a tighter, smaller experience.

The truth of the matter is that open world games are not for everyone, but if you can handle the complexity, Skyrim provides a spectacular and immersive new land to explore. The Switch version, boasting all three expansion packs and (naturally) full portability, is as good and complete a port as anyone could hope for, so if you have the time to invest, there’s no reason not to jump in.

The Elder Scrolls V: Skyrim arrives on Switch in beautiful form. It won’t quite be for everyone, but it’s an excellent chance for Nintendo gamers to experience this standard-setting, multiformat genre classic.

If you’re not careful, you can find the game progressing before you feel you’ve got to grips with it. Quite early on, I was forced to confront a dragon. After defeating the beast, I was hailed as some sort of hero, when in reality all I’d done was swing an axe at it.