Much like the series this title is named after, these titles are heavily text-based adventure games that follow Ryunosuke Naruhodo, a student at Imperial Yumei University, and heavily implied to be the ancestor of usual series protagonist, Phoenix Wright, as he finds himself thrust into Great Britain during the Victorian Era for reasons I will not go into. As is Ace Attorney tradition, he meets various eccentric characters as he investigates 10 different cases that over the course of the game, naturally link together somehow.

As you'd probably have guessed, these games are prequels to all the other Ace Attorney titles, and because they are set at least a hundred years in the past, allow the writers a rare opportunity to work with a completely fresh cast of characters, and quite frankly, I think it works in their favour here. Without having to worry about writing around established characters, it really feels like the plot of this benefits as a result. Thankfully, you don't need to have played any other games to enjoy these two. The plots are completely standalone, all that newcomers would miss is a few references here and there.

A recurring theme that I was surprised to see throughout was the abundant casual racism that a lot of the British characters have towards Ryunosuke and his Japanese friends. Like, it's not excessively vulgar, but it does happen frequently enough to be noticeable. Considering the period in which this game is set, it's not surprising, but I appreciate that this game wasn't afraid to go there and use it to help drive the plot forward at times. This is helped by the very good localisation. Ace Attorney sometimes has some spotty localisations, but this one is top notch with not only competent writing, but actual correct English spellings, and a wide variety of different accents. It kind of reminds me of the quality localisation that Pokémon Sword/Shield has, it's the same kind of attention to detail that really sells the setting.

Despite this new setting, the mainstays of Ace Attorney mechanics are here. The game is split into two sections: Investigations involve you exploring several scenes in a manner similar to a point-and-click game, as you gather evidence and testimony to build a case for whatever client you happen to be representing at the time. Then, there's the courtroom sequences, where you pick apart various witnesses using the knowledge and evidence you've accumulated so far. It should all be very familiar to series veterans. 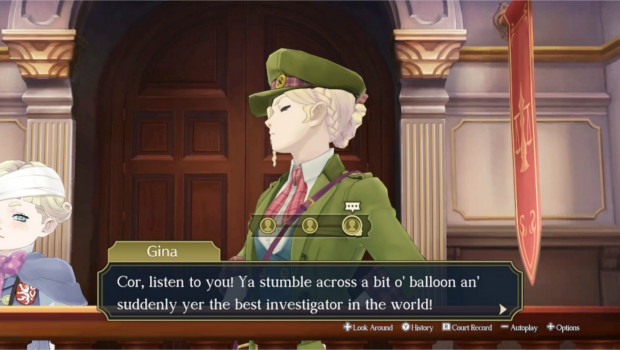 You're damn right, I am! I've played EVERY AA game to date! Don't you dare question my balloon stumbling skills!

That said, there are a few new mechanics to help spice things up. Cross-examining multiple witnesses makes a return from Layton VS Wright, where something that someone says can provoke a response from someone else on the witness stand, which you can then pounce upon to have them reveal new information. There was one particular moment where this mechanic was used in a spectacular way! It was positively genius! Won't spoil it, of course, but I had a massive smile on my face.

As far as actual new mechanics go, we have the "Summation Examination". Being set in Britain, the courtrooms there utilise a jury system. Six members of the public are randomly chosen to watch the trial, and decide for themselves whether the defendant is guilty or not. They can declare their standing whenever they feel like it, and should all six of them come to a consensus of Guilty (Which will happen), then you'll be forced to conduct the Summation Examination, your last shot at convincing at least 4 out of the 6 jurors to change their mind. You do this by using evidence, and even other jurors' statements to break apart their reasonings. This is a fun twist on the Ace Attorney formula that naturally leads to many funny moments as some of the arguments are infuriatingly flimsy, because let's face it, the general public are idiots!

The second new mechanic is the "Dance of Deduction". This takes place in the investigation sections and involve working together with "Great Detective" Herlock Sholmes (No, not a typo) to deduce what secrets an uncooperative witness is hiding. Ol' Herlock is quite perceptive, much like the namesake this game hints at, as he notices tiny little details in human behaviour that lead to shocking conclusions. The problem is, Herlock is kinda off his rocker at times and he usually ends up coming to a completely ridiculous conclusion. 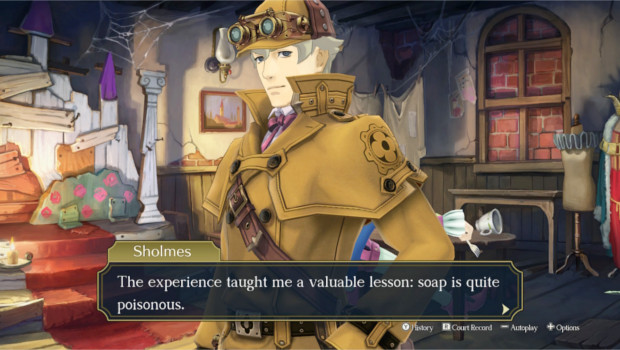 A genius at work, people!

So you have to rotate the camera around the scene and find details that help Herlock come to a more sensible conclusion, all while witnessing choreography that is clearly inspired by the BBC series of Sherlock. It's all great fun, and I looked forward to every single one of these. Herlock is a great character, and really helps entertain the player with his batty theories!

The music really is a step up here! Probably one of my favourite Ace Attorney soundtracks ever. And that's saying something! There's even a neat section in the main menu where you can listen to various unused songs, complete with comments on why they weren't used from the composers themselves. It's that kind of nerdy stuff that someone like me really appreciates in a game. The visuals are great, too. 3D Ace Attorney has really found its footing here. The animations are really fluid, while still maintaining that wacky vibe the series is known for.

Simply put, this is (Resolve, in particular) one of the best Ace Attorney games ever. It's hard for me whether I'd say it's better then Trials and Tribulations, it really is that good! Quite frankly, it's... 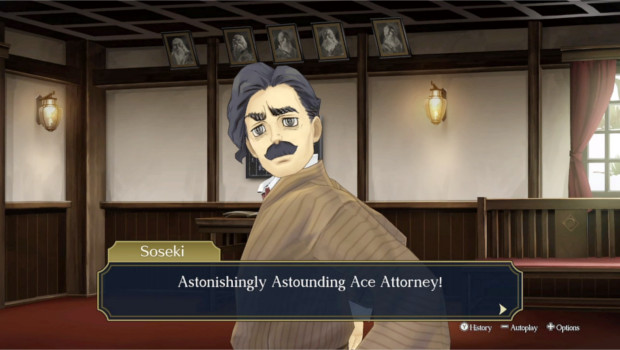 This collection goes to show that late really is better then never! If you're an Ace Attorney fan, you absolutely owe it to yourself to play through this collection. And to all those who haven't tried one before? This is a wonderful place to start!

Great writing and localisation
The soundtrack is stellar
The new mechanics to the series are a lot of fun
Wacky animations are a great source of humour
Herlock Sholmes might just be my favourite Ace Attorney character ever!

Without having to worry about writing around established characters, it really feels like the plot of this benefits as a result. Thankfully, you don't need to have played any other games to enjoy these two. The plots are completely standalone, all that newcomers would miss is a few references here and there.