The story will not win any awards, you are a former police detective hell bent on exacting vengeance for his partner's murder through the use of raw firepower, slow-motion, and dive/dodge mechanics to tear your way through the criminal ranks of Hong Kong.

The controls are set up in a way to make pick-up-and-play sessions an ease. Regardless of which of the 4 unlockable, and upgradable, weapons you choose to start a level with, ZR is your trigger, R your dive, B picks up fallen guns, A reloads, and ZL slows time down. That’s it. No complex button combinations, just simplicity. The Hong Kong Massacre needs this simplicity, as the game throws a level of difficulty at you that will require the replay of levels numerous times to get through without a scratch. A scratch, being a single impact wound from an enemy, is an instant death. It’s a requirement to stay on your balletic toes as you dive through windows or dodge behind cover, staying aware of your surroundings and exploiting the environment however you can.

A fully remappable button configuration is especially handy as you can shoot while diving, and this is awkward with the ZR and R buttons, but far more functional when moving the dive button to the ZL, feeling a lot more Enter the Gungeon-esque, far more intuitive. The dive acts as a temporary shield, as you become invincible during the brief moments of its use, but feels incredibly floaty and hard to direct, though in equal measure satisfying when pulled off correctly. Diving or sliding over car bonnets while dispatching kung-fu gun justice is a guilty pleasure. However, there are many times when the dive button, and the game’s architecture, make it awkward to register what can be vaulted, and what can not. The fact that the game is top-down renders it difficult to imagine the height of obstacles, such as piles of boxes, and whether they’ll provide full cover, or are able to be vaulted and, therefore, provide no cover whatsoever. 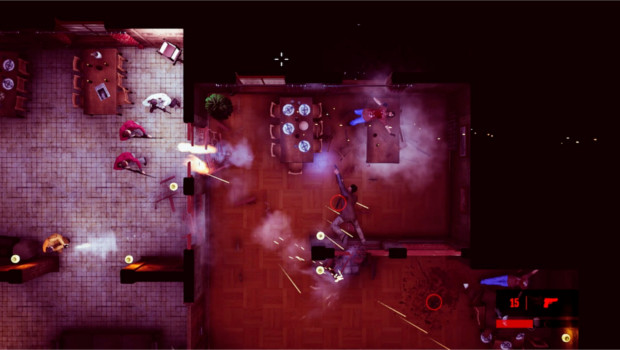 The top-down perspective means you'll need to use a lot of discernment in each environment.

Many a quick death can ensue while you’re trying to dive through a window only to clip the frame either side, and send the trajectory of the dive into a complete stall. Enemies can also dive out of the way, with this rendering them invincible for a second, and making one of the game’s challenges, a hundred percent hit rate, very difficult indeed. There are times when the game rewards exploratory dives, the most memorable being a dive through a window onto a balcony which allowed access to the back of a troublesome room, and made it easier to clear out the remaining goons. Those goons you see aren’t the sharpest tool in the kit. They seem unable to figure out how to open a door, and often won’t react to any noise that occurs in the very next room. If there’s a window, however, watch your step, as their vision is exceptional.

When surrounded by more than one enemy, it’s vital to slow down time and plan for the next move. This slow-motion ability is limited in its duration of a single use, but a relatively quick cooldown counter lets you use it as many times as you want within a level. The options menu allows you to tinker with the aim sensitivity, and it was a requirement to add a bit more fluidity to the character’s turning speed, as the original settings felt a little too heavy. Your character is not fleet of foot in general, as his gruff cop-style is to walk into the ensuing carnage, and the original settings made the turning too tank like. That said, crank the sensitivity to its max, and the aiming system becomes a little too twitchy for those precision shots. A little fiddling the first time you play will be required to find something that you’ll be able to feel natural with. 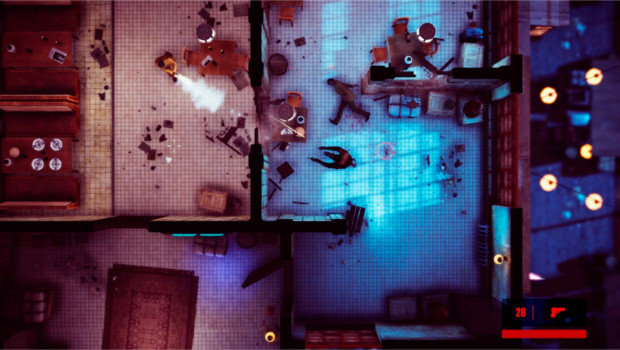 The lighting system, with its red and blue hues, breaks the areas up nicely.

To go along with this is the on-screen reticle. It’s a mere cross displayed in the direction your character is pointing with the right analogue stick. It’s colour can be changed in the options menu, but due to the game’s real life locations, and vibrant colour palette, it doesn’t really matter what colour you choose, at times the reticle appears to disappear as it meets a part of the level that matches its hue. A camouflaged reticle makes aiming a tad more difficult. And, you are going to need that reticle visible as often as possible. Trading shots with an enemy whilst diving across an open doorway often feels an edgy experience because of the one-hit kill nature of the game.

And, the Hong Kong Massacre is difficult. A single mistake means restarting the level right from the beginning. With 3 difficulties to choose from, easy, medium, and hard, you can play through a single difficulty at a time. As the 3 levels increase in difficulty, so the enemy reaction speed and accuracy increase accordingly. Levels are compact though, making it possible to finish the time related challenges in short order, for example, 40 seconds to clear a level without dying. Levels do get longer as you push further into the game, but remain short enough to tease you with yet another attempt at that unfinished level or challenge star.

The weapon upgrade system is star based, each level has 4 stars to unlock for completing challenges. Invariably, time based, completing a level without using slow motion, perfect aim, and one for opening a new level. You’ll start the main game with a single weapon available to you, a pistol. You can pick up any of the weapons that the enemies drop as you make your way through a level, but three other starting weapons remain locked, a shotgun, SMG, and assault rifle. Each starting weapon can be upgraded, using your collected stars, from increasing its clip size, fire rate, unlimited ammo, extra clips, dual wielding, and increasing movement speed whilst using that weapon. It’s not an extensive arsenal of carnage, but it gets the job done. 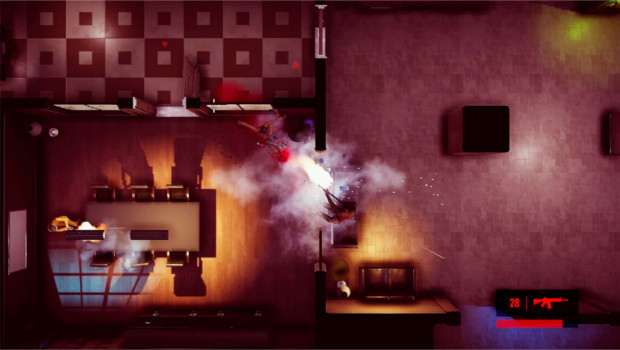 Some interesting flooring choices in this area, it will all look much the same after this battle, though.

The game, for the most part, looks good. The lighting and particle effects of the guns as they let roar, the puffs of concrete as a bullet tears a little too close for comfort, the splintering of doors rendered obsolete by a point blank shotgun blast, and the environmental details of the Hong Kong architecture are detailed and everything runs smoothly whilst it's all kicking off. There’s a huge amount of blur effect going on in the parts of a level that remain inaccessible, for example a 30 foot drop outside to the alleyway. And, upon killing the last of the remaining enemies, there’s a slow-motion kill capture with fountains of claret that is highly blurred, so much so that it’s hard to discern what’s going on. This is to hide the fact that the models of the characters are not detailed, and not particularly well-animated. Too often the ragdoll physics lead to some amusing deaths where chairs may explode upon impact, and characters glitch through walls, doors, and windows, whilst twitching like John Travolta on a Saturday Night. This is the exception to the rule, but is a little jarring compared to how good the rest of the game looks.

Even though it does look good in its level of detail, the camera is ever so slightly zoomed in too close to the action, and it's often difficult to spot the location of an off-screen enemy, or whether there’s an obstacle between you and them. Many deaths will occur with an enemy rushing toward you, and being unable to react in time from when you first see them. The enemies do have a red arrow showing you their location, which increases in size as their proximity increases, but other problems raise their head, like shooting in the direction of an off-screen enemy will never hit its target. The enemy needs to be at least one pixel on the screen to be considered fair game, which at some points is enough time for the enemy to pop off a highly accurate game ending shot.

Restarting a level after a death is fast, but there is a slight 4 second delay, which takes away from it being instant, and it’s always a second too long giving you a slight pause to getting back into the action. Your character’s death scene is played out for a little too long as well, taking you away from the instant rebound back to the action in other games of this ilk, such as Hotline Miami Collection. 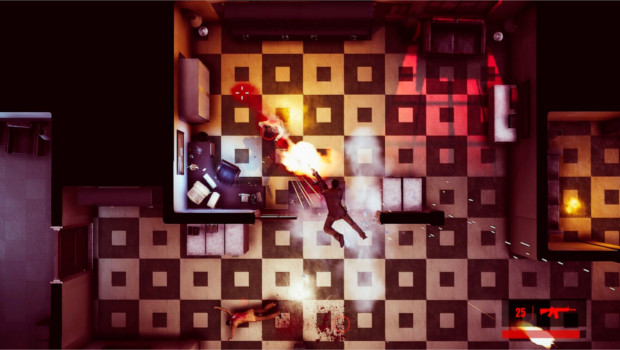 It's like Chess but with guns, Detective to square 'E3' takes out Mafia pawn with a midair blast.

The appropriate gun noises, slow-down effects, splintering of wooden doors upon a shotgun blast, ricocheting bullets obliquely shearing a concrete wall, are all slightly muted. The volume of the bass needed to be turned up on this game to make the guns feel more weighty, and substantial. The options menu indicates rumble effects to accentuate the sound design, but it hardly ever feels anything more than a death indicator. The game takes place in the early 90s and the music is reminiscent of tunes of that era, with a good variety of styles across its soundtrack, toe-tapping, but instantly forgettable. Turn them down if you want to listen to all those muted bullets. Strangely, the enemies within levels are mute, no death screams in this game, just muted-bullet porn.

There are times when the objectives feel a little unclear. A case in point being the first Chapter’s Boss, Waise Chow. So far through the first 6 levels, you’ve been taught that a single shot kills, and that diving toward a window allows you to smash right through it taking you into the next room. But, the rules are re-written and now you’ve a boss that requires 10 hits to take down, as you exchange fire between windows that you cannot traverse. Once you’ve learnt the rules for the fight, it feels exhilarating, and a hell of a challenge. But throwing you in the deep end, and teaching you the rules by numerous deaths seems a little unfair and cheap.

Not without a few niggles, The Hong Kong Massacre aims its hardcore top-down twin-stick shooting at the more difficult end of the spectrum, but it all feels fair. With a quick re-introduction to the action after a death, it's highly rewarding for a persistent player. And, the slow upgrade system makes it worthwhile to revisit earlier levels to max out each gun’s potential, and give you an edge in the later levels.

The lighting and particle effects of the guns as they let roar, the puffs of concrete as a bullet tears a little too close for comfort, the splintering of doors rendered obsolete by a point blank shotgun blast, and the environmental details of the Hong Kong architecture are detailed and everything runs smoothly whilst it's all kicking off.