The Legend of Zelda: Link's Awakening

Link’s Awakening has a special place in my heart. You see, the Game Boy was the first console I owned and as a result, it was the first Zelda game I ever completed. I’ve lost track of the amount of times I’ve finished this game. That said, I wouldn’t say that the first portable Zelda adventure was my favourite, not by a long shot, I’m not that blinded by nostalgia.

For a 26 year old game, it holds up remarkably well, but even if you do play the DX version that released on the Game Boy Colour, there’s no denying that it has some quirks to it that can feel a bit dated at times. Someone more used to modern gaming visiting the original Link’s Awakening might feel that it’s hard to play.

Enter Link’s Awakening for the Nintendo Switch, a full remake specifically of the original game. Sporting a redone visual aesthetic that resembles a toy-like style, redone music and tweaked gameplay mechanics to bring the classic adventure up to a more modern standard. You play as Link (or whatever you want to call him, how about Dumbface?) as he gets hit by lightning while sailing across the ocean. He washes up on a beach on Koholint Island and is tasked by a mysterious owl to travel the island in search of 8 instruments in order to awaken the Wind Fish so he can escape the island and get back to whatever he was doing in the first place. 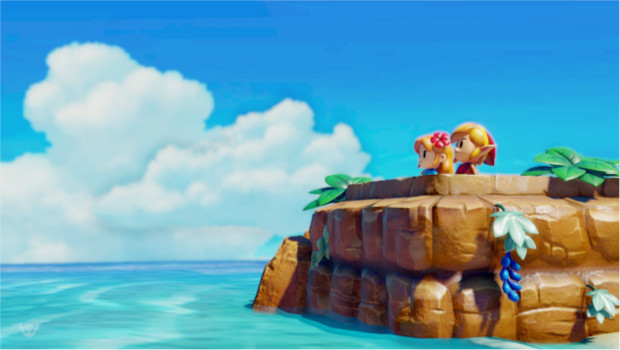 Link and Marin looked on forlornly as that bloody seagull made off with their only bag of chips.

By today’s standards, the story is quite light, you’re pretty much told to go do a thing, and then when that thing is done, you go on to the next thing, with barely any interruptions to give you a story. Whether you’ll appreciate that will depend on how much plot you want from a Zelda game, because there isn’t much. But what is there is a simple, yet, powerful story that still stands out amongst all the other Zelda games.

The game plays very much like a traditional top-down Zelda. The majority of the game is played from a fixed camera angle that follows Link around the world. As you progress, you’ll gain items that you can assign to buttons. A much welcome quality of life improvement is that a lot of items have their own dedicated button now. This helps to lessen the amount of time spent pausing the game to switch what items you use.

As well as that, the wider screen and higher resolution allows you to see much more of the world at one glance, which became very helpful to determine where I was and where I needed to go. Not to mention the map screen which allows you to place pins to help remind you where stuff you might not be able to reach is so you can go back to it later.

They are all small changes that help to make the game feel that much more polished than its Game Boy counterpart, but the base game is still very similar, and it is a bit easy-going. Thankfully, there’s a new harder difficulty in Hero Mode, which doubles the amount of damage enemies deal and prevents you from recovering health through health pickups. While I still didn’t experience any deaths, I did come close a few times, so I can imagine this mode can provide a healthy sense of challenge for the Link’s Awakening experts out there, and it’s nice that the option is there from the get-go.

While the main crux of the game is the same as the Game Boy, there are some extra secrets to find, whether it be the 24 new pieces of heart, or the figures that you can decorate Mabe Village with, there’s at least something new to discover for everyone, but don’t expect much there if you know the game inside and out. 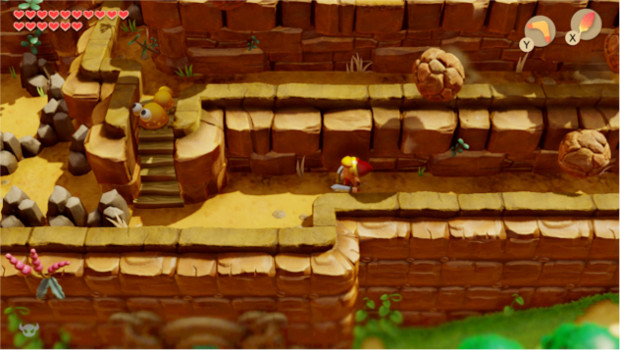 Natural landslide? Or the Hylian gods taking pot-shots at Link? You decide...

It’s worth mentioning that one of the extra sidequests from the DX version is missing from the Switch version, namely the camera quest which tasked you with finding and taking 12 photos around the island. This sidequest isn’t in the remake, but instead you get a sidequest involving collecting various dungeon rooms, in which you can make your own dungeon layouts, sort of like a Zelda Maker, but nowhere near as in-depth as the Mario version. You can even use amiibo to store your creations and share them with a friend. Which is neat.

That said, there are a few things that stop this from reaching the pinnacle of great remakes. Every now and again, mostly when entering a new area, I noticed the framerate drop quite a bit, it’s only for a brief moment, but it’s negligible as far as gameplay goes. Another thing I felt was strange was that the game does not give you the option to use a D-Pad for movement. Considering that the game still utilises 8-way movement, it’s a bit bizarre that the control stick is the only way to move. And last, but most importantly, there’s no way to set fire to the dogs in this version, which is unforgivable.

Of course, the biggest changes are visual. The Switch version of Link’s Awakening opts to use a sort of toy-like aesthetic, which makes everything on Koholint look absolutely adorable. Animations for Link and the enemies help to make it apparent what they’re about to do, and just exude charm. I’m a particular fan of the animation for when you use the Pegasus Boots, where Link’s feet run at a speed that would fit right at home in a cartoon. There are also plenty of impressive visual effects that help breathe lots of life into the game. If the appearance doesn’t bug you, then you have a gorgeous game to look forward to. 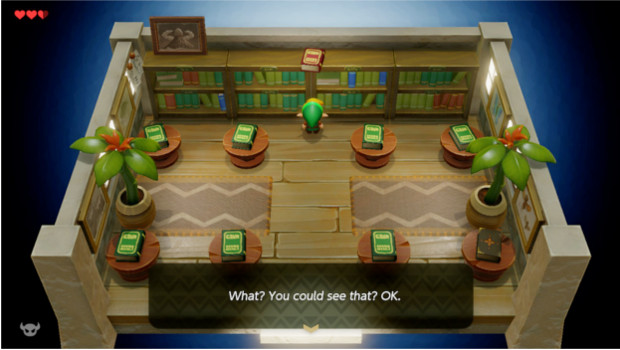 Great, now the game is writing captions for me!

But for me, the best thing about this remake is the remastered soundtrack. Sporting a fully orchestrated style that elevates the already memorable songs to new heights. In particular, the remix of Southern Face Shrine was so well executed, that it literally sent shivers down my arms and if that’s not a sign of well written score, than I don’t know what is.

Looking back on my 8-hour stint through the Switch version of Link’s Awakening, I can honestly say that it holds up. It’s not a massive open-world like the last mainline Zelda game on Switch, so if you’re expecting that, you’ll be a bit disappointed, but whether you’re looking to jump into an old-school Zelda adventure or just looking to relive an age old Game Boy classic, then you’ll find just what you’re looking for in this remake. In fact, I’d go so far to say that this particular Game Boy remake on Switch is the best Game Boy remake it has to offer and it puts any other Game Boy Remakes on Switch to shame.

Link’s Awakening remains an absolute joy of a game and this version goes to show that you only need a few tweaks to improve on a 90’s masterpiece, but minor disappointments such as its framerate stop it from climbing to that spectacular top score.

Framerate issues are small, but noticeable
D-pad movement is a confusing omission
You can’t burn the dog any more

Considering that the game still utilises 8-way movement, it’s a bit bizarre that the control stick is the only way to move. And last, but most importantly, there’s no way to set fire to the dogs in this version, which is unforgivable.