Murder mysteries are a staple of film and TV but have rarely been translated into games.  For a medium that deals with its fair share of death, very rarely is it used for intrigue and even less so are you asked to try and prevent it.  The Sexy Brutale is essentially a supernatural episode of Sherlock, but rather than just point out who did what and how you must manipulate time to prevent the murders of visitors to a curious mansion that holds its own secrets.

You play as Lafcadio Boone who has found himself in a mysterious mansion alongside some other guests, all of whom are being killed off.  During The Sexy Brutale you must not only solve their murders, but also prevent them from happening in the first place.

Shortly after starting the game you are told that in this mansion “the staff are murders, the guests are victims” and just after you’ve finished making a mental joke about a low-budget hotel chain you’re set with preventing the murders of several guests.

When you first start you are given a broken pocket watch that lets you rewind to the start of the game day (midday).  You can rewind at any time, or at 5pm it will happen automatically.  The first murder occurs at 4pm so you have most of the day to figure out how to prevent it happening. 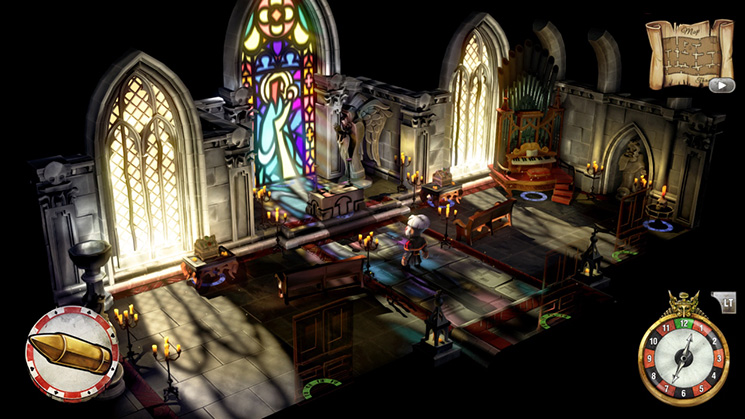 You do this by essentially spying on people.  You can peer through doors and move a narrow line of vision cone left and right to see what is happening.  If you step into a room with someone else in everything turns red and you need to get out of there quick.  When you’ve been spotted the only thing you can do is escape through a door - you can’t interact with items or even hide in a wardrobe.  The mask you were given at the start prevents you from being killed too quickly (you can if you stay around long enough but you are given generous time), but you still need to operate in secret.

As you move around the rooms you find items that may come in useful, but what is key is keeping an eye on people as they move around.  This is relatively easy at first, when there are fewer rooms, but as more of the map opens up you’ll have a harder time keeping track of every movement.

Lafcadio controls much like how you’d expect for someone of his stature - there’s not really a sense of urgency, or at least not as great as yours might be.  His movements are hardly slow, but he moves like someone whose more spritely days are behind him.  Whether this is by design based on the character or just to try and ensure your movements don’t result in you racing ahead and having to wait around I’m unsure, but it seldom feels annoying.  In fact, the only time I ever really get annoyed is after you reset each day you wake up on the floor and have to wiggle the analogue stick a bit to wake him up, complete with a slow stumbling rising to his feet. 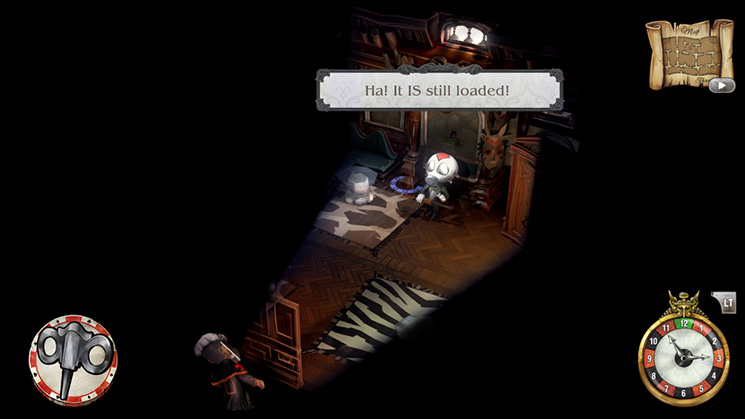 The controls are straight forward when moving around the mansion.  The analogue stick obviously moves Lafcadio, Y lets you spy through a door when you are near it, X lets you use items you’ve picked up and B is the main interaction button for doors and decorative items (which give you more details about the characters and locations).  The items you can interact with range from wind up keys for clocks (so you can activate them in new areas - enabling you to start the day in that area), keys for chests, doors etc and various trinkets and objects used to divert characters and prevent murders.

At any point you can open the map and you can scrub through a timeline to see where people moved, but it is what they’re doing in each of those locations that is vital in preventing the murders.  Sadly on the TV screen zooming in to the map highlights how it is a low quality texture, ultimately looking a bit blurred, but you are pretty much just looking out for routes taken rather than relying on the map to indicate which room is what.

Each time you save someone you get their mask and their unique abilities, meaning as you progress more possibilities and areas are opened up to you.  You’ll have to utilise these increased abilities as the puzzle-solving elements become more complex and the locations become bigger.  These upgrades, along with locking away certain areas until you progress, enables the game to spread out the pacing so that it doesn’t feel like they’ve run out of steam or ideas early on.  Following the first murder you also get the whole afternoon (i.e. from midday to midnight) to work with and increasingly gain control over time.

Time is of course an important part of this game - you are racing against the clock to solve murders but you are also dependent upon it.  You have to learn when a murder takes place (although an icon on the ever-present clock indicates this) and then work backwards to see who was where and when.  Your pocket watch is used to control time and once you repair clocks dotted around the mansion you can also essentially sync with it, meaning when you reset time you start there. 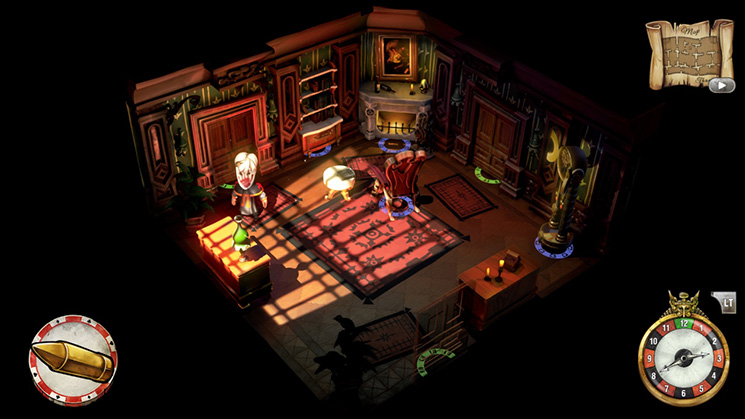 The game’s visual style is striking.  As soon as I saw it in person I was impressed with the level of detail on display, and the diorama-esque set-up of each room makes this stand out even more.  The amount of detail in each room, from the art to the descriptions and world-building information, makes it a game worthy of fully exploring in spite of the brutal murders you’re supposed to be stopping.

The characters, with their almost Chibi-esque design, all draw on tropes of murder mysteries but are intriguing and fleshed-out enough that it doesn’t ever feel like a cliché. They have their own personalities that stand out, allowing each murder to feel more personal and less like an exercise in box ticking.

There may not be a huge variety of music in The Sexy Brutale, but what it does offer is great.  You’ll hear the same music a lot while playing the game, but it never becomes tired or annoying.  Each area of the mansion has its own score and as the murder is about to take place it crescendos, adding to the already rich atmosphere within the game.

Cavalier Game Studios must also be applauded for its sound design in The Sexy Brutale.  Each murder is tied to specific noticeable sound - a bell chime, some glass breaking, the crack of lightning - and you are soon able to tell the time of day from the sound you hear in the background.  It is small but very well done.

Unfortunately, the further you get in the game the more technical issues you come across.  Frame rate issues begin to kick in hard, and even when you peer through a door for the first time quite often it stutters while it loads (you see an image, but the loading icon in the bottom right is whirring around, although it too can be affected by frame rate problems).

Even when docked the frame rate issue persist.  Sometimes you’re left frozen to the spot while the game catches up with you, while others you judder.  It isn’t even limited to the first time you go to an area, some areas will always cause the system to stall when you enter them.  Cavalier Game Studios has promised a patch is forthcoming, so hopefully this won’t be an issue that won’t affect us for too long.

Another minor issue that bugged me was the fact the main action button is mapped to B, meaning due to muscle memory I often did something I wanted to in fact cancel.  It’s obviously no huge issue, but it is a nuisance.  The controls on the pause screen, which contains the map, your inventory and more, also feel a bit clunky, but when you’re actually solving murders it is straightforward enough.

It is easy to liken The Sexy Brutale to other games to try and explain it; Majora’s Mask’s Groundhog Day time cycle, Ghost Trick’s repetition in the name of solving murders and even elements of stealth from games such as Splinter Cell.  However, to draw comparisons is to do a disservice to how unique and wonderful The Sexy Brutale really is.  It is more than the sum of its parts, it is a great game that is unlike anything else out there.  It is a game where you have to use logic, deduction and occasional frantic movement to ensure the ever-moving chess pieces (the characters) are diverted or distracted appropriately.  It challenges you to learn rhythms and routines in order to break them, but only once you have explored enough to figure out what part of the cycle needs to be broken.

It’s beautiful art style, catchy music and great use of sound makes the game stand out, it’s just a shame the Switch version is hit with technical issues.  Unless you’re easily irritated or impatient it is still a lot of fun to play, but it would be understandable if you wait for the game to hopefully be fixed.

A great story and challenging puzzles within a visually striking game. The Sexy Brutale is a great gaming experience unlike a lot of other games.

The amount of detail in each room, from the art to the descriptions and world-building information, makes it a game worthy of fully exploring in spite of the brutal murders you’re supposed to be stopping.