You wouldn't think it by looking at the WiiWare version of Toki Tori, but this charming little puzzler started out life on the Game Boy Color. Developed by Dutch studio Two Tribes, the game featured the titular chubby birdy on a mission to retrieve eggs from four dangerous worlds. However, the title was released in 2002 after the release of the Game Boy Advance, and despite receiving rave reviews, the game was a commercial failure due to GBA mania. A fan following of gamers who were lucky enough to play the original slowly formed, and Two Tribes have brought their adventurous chicken back from the dead to grace the WiiWare launch line up.

Toki Tori's gameplay remains largely the same as its predecessor. Whilst it would appear at first glance to be nothing more than a meagre platformer, the title is actually a puzzler in the vein of Worms: Open Warfare 2's tasking puzzle scenarios (which was also developed by the excellent Two Tribes). Presented with a large world to roam around in, such as jungles or lava moat-protected castles, it is up to you to analyse Toki Tori's surroundings and work out how exactly you are going to make your way around the level to collect all the eggs which Toki Tori so desperately wants.

This chubby little chicken has eaten far too many seeds, however, and in some cruel twist of fate he is stripped of the ability to jump or attack, meaning you'll have to deal with the many obstacles and enemies you are confronted with in a rather different way. After studying the first few levels, you realise that to succeed you will have to awaken the enigmatic section of your brain which usually only gets a workout in those brief few milliseconds you have to devise a Tetris stratagem as the blocks are falling. Though whereas in Tetris you have quite a short timespan in which to wipe out the Tetriminos, in Toki Tori you can spend as long as you want studying the level. Just hit the '-' button on your Wii Remote to freeze the action and check out the best path to take. 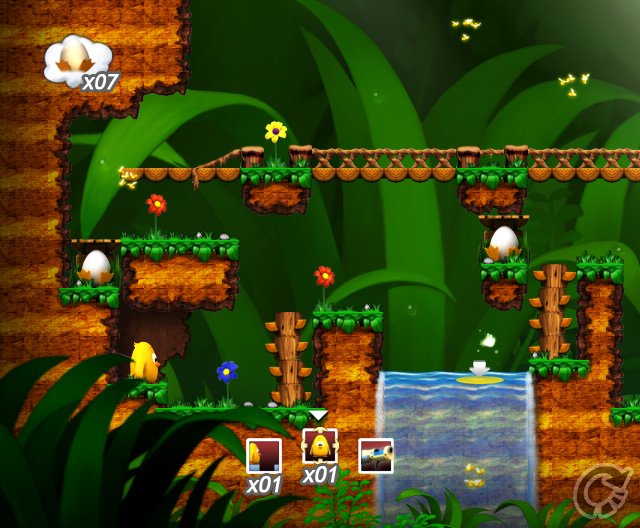 After some long, hard analysis, we deduced that the chicken did indeed come before the egg.

But what of those aforementioned obstacles and enemies? Those of you who watched the original trailer for Toki Tori will remember that one of the most highly touted aspects of the title was the loveable chicken's vast arsenal of devastating weapons. Similar to the puzzle mode in Open Warfare 2 (in which you were provided with limited uses of certain weapons to kill all the enemy invertebrates), you are given a few items to use to help you across the level. Simple bridges can be built to patch gaps and allow Toki to safely cross chasms crawling with spiky hedgehogs, small pillars can be hauled aside, a Star Trek-like teleportation device can warp Toki over small distances, and the sadistic little feathered one can haul a ridiculously large ray gun out of his, erm, pocket (we'll assume it's his pocket, but we sickeningly can't remember a bird ever being gifted with the awesomeness of pockets), and fire a chilly blast at the defenceless hedgehogs who stand in his way. Toki can then haul himself up onto his nemesis' frozen carcass for the greater good of rescuing an egg.

However useful they may be, it is never as easy as shooting all the enemies and then grabbing the eggs and claiming victory. Depending on actions taken earlier in the level and where you use your items, you could potentially find yourself trapped in a deep chamber with no chance of escape, forcing you to restart the level. This should not be seen as frustrating, as these unfortunate scenarios will only encourage you to study the environment more and think more logically before you rush into the warzone all guns blazing. If you are well and truly stuck however, a 'wildcard' allows you to skip a level and move on to the next. Successfully completing the mission you were stuck on allows you to retrieve your wildcard for use on another level. I heartily recommend that you avoid using the wildcard at all costs, though, as the feeling of triumph over the forces of evil at work in the game – a Eureka moment – feels too good to pass over when you finally accomplish your mission. And this game has its fair share of Eureka moments, which are especially apparent when you go through the painful Hard levels.

Toki Tori also makes wonderfully unexpected good use of WiiConnect24 and the Wii Message Board. As you work your way through the worlds, Toki will send travel logs to the Message Board with attached holiday snaps of his adventures. Few games actually use this feature (Super Mario Galaxy being the only example I can recall), and so it's lovely to see it being used to such great effect. The only other notable extra is co-op with an extra Remote, which isn't really recommended. Having someone sat at the side of you pointing out a possible route is good, but having them potentially messing up a level by plonking bridges where ever the hell they like may grate your cheese. 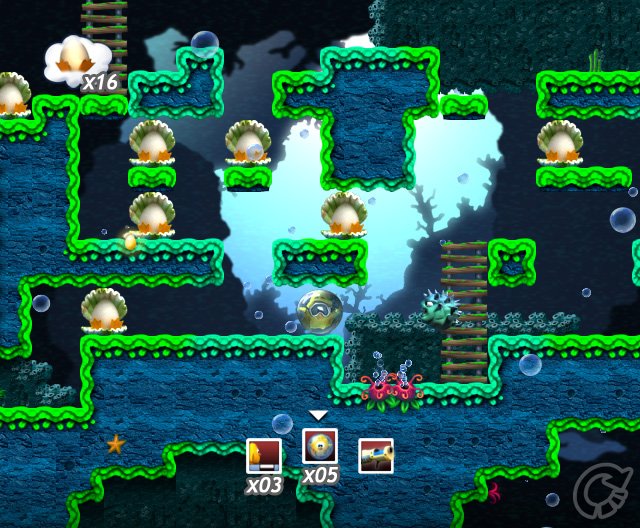 Toki has more kick-ass gadgets in his arsenal than, erm, Inspector Gadget.

Whilst on the subjects of controls, the Wii Remote and Nunchuk are definitely the best option. The Wiimote-only pointer controls are pretty messy, and you don't have total control of Toki (it's effectively point and click), and for some strange reason you're unable to use the D-Pad to control Toki with the Classic Controller, which forces you to use the uncomfortable left analogue stick, hence spoiling an otherwise flawless scheme. The Nunchuk however gives you total control over your chicken, with the Wii Remote being used for laying down the items.

Visually, Toki Tori looks lovely. Bright colours and vivid 2D environments are a treat to the eyes, with Toki's humorous little jig before he gets sucked into a portal upon the completion of a level is a sight to behold (my heart was filled with pure joy whenever I snagged the last egg and Toki began to dance). The static and repetitive loading screens are always the same however, and it'd be nice to see some cutscenes in between worlds to give the game a bit more depth, though these are minor gripes. The music is really upbeat and reminiscent of simple 2D titles from the late 80's/early 90's – they just do the trick without being intrusive or irritating, although some tunes do grow repetitive if you find yourself repeatedly failing at certain levels.

It's criminal that so few people have enjoyed the wonders of Toki Tori up until just recently. Beneath its cutesy exterior lies a charmingly tasking game which requires all the logic you can muster to get through. With over 70 levels of solid puzzles which will be difficult even for those who feast on Tetriminos for breakfast, Toki Tori is probably WiiWare's best offering to date. With WayForward set to resurrect cult GBC hit Shantae on WiiWare, let's hope the platform can work its magic again and bring even more previously unknown yet brilliant titles to a greater audience. We cannot stress this enough: if you have a Wii and you have access to the internet, you must buy Toki Tori.

Toki Tori gets a new lease of life with Nintendo's new downloadable gaming service. Oozing with charm and held together with love, you will be hard pushed to find a better puzzler across all platforms.