2013 was an interesting year for Shin Megami Tensei fans, because that was when we first heard of a collaboration between that and Fire Emblem. A lot of people were keen to see how the devil summoning RPG would gel with the fantasy war strategy gameplay of Nintendo’s franchise. We didn’t hear much about it for a while after that, but when we finally saw some gameplay of it, it was… well… 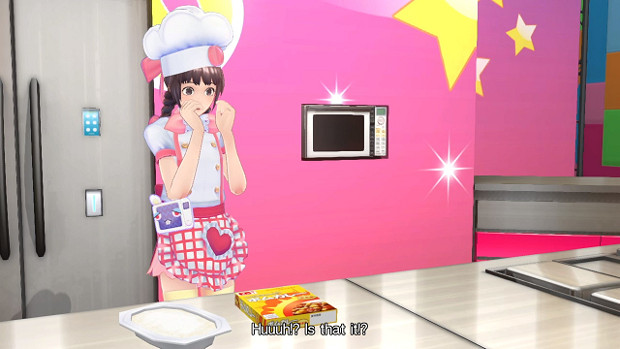 Tokyo Mirage Sessions #FE Encore is a port of the WiiU Turn Based RPG that has a heavy focus on the Japanese Idol industry as its setting. If you’re thinking that setting has nothing to do with either Shin Megami Tensei or Fire Emblem, you’d be right. It’s about as far removed from those series as you can imagine. It feels closer to the SMT spin-off title Persona, to be honest.

You play as Itsuki, a random talentless teenager who lives in Tokyo. After unexpectedly meeting his friend Tsubasa at an idol audition event, things go a bit wrong when people start collapsing and Tsubasa is abducted and taken into a strange world. Itsuki follows and find himself attacked by creatures called Mirages. Mirages feed on the creativity of people, called “Performa” and that makes Tsubasa a prime target. Right when things look hopeless though, Itsuki discovers he has a special power and manages to use it to ally with two particularly special Mirages called Chrom and Caeda (Yes, they’re the Fire Emblem characters).

This eventually gets him and Tsubasa recruited by Fortuna Entertainment, a talent agency that consists of idols that secretly fight Mirages with their own Fire Emblem Mirage friends and embroiled in a plan to find out who is sending these Mirages to the real world to steal Performa and stop it. 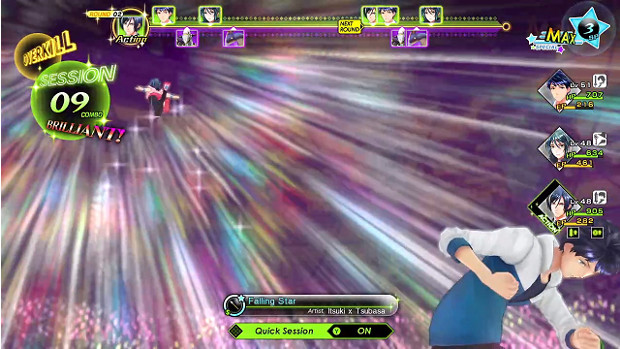 I'd say throwing your best friend into the ceiling makes sense in context here, but I'd be lying.

If I had to describe the plot of this game, I’d say it was very Japan. The game has a heavy theme of the Japanese idol industry and as such, might put a lot of people off. The game is incredibly silly and if you go into it expecting something more serious, you’re going to be very disappointed. The person who will enjoy this is the person who can go along for the ride and embrace the silliness.

Like most Turn-Based RPG’s, battles are a key component of the gameplay and this is where Shin Megami Tensei shows its influence. The main key to victory is hitting the enemies’ weaknesses, pull this off and the rest of your party will follow up with a Session attack for some extra damage. It works both ways though, if you get your weakness exploited, you’re at risk of getting hit with a session attack yourself, and later on, this can be game-ending. There are multiple difficulty levels if you find the game too much though. So it shouldn’t be impossible to get to the end. Outside of the actual battles, the dungeons you explore are quite complex, with a lot of puzzles that require you to pay attention to your surroundings and navigate smartly. I quite enjoyed the puzzles here and despite playing the WiiU version, I still had to think ahead.

When you’re not exploring warped versions of Tokyo, you’ll be spending time in the real Tokyo, taking on side quests, some of which involve helping your fellow idol wannabes into furthering their careers in the entertainment industry. The weird thing is that a lot of these smaller plots are actually more engaging than the main plot and feel more fleshed out in that regard. You’ll want to do these as well as they give you some powerful abilities to use in fights, most of which involve fun elaborate dance numbers that I never get tired of watching. If you do get tired of it though, you can always skip them with a press of the B button. 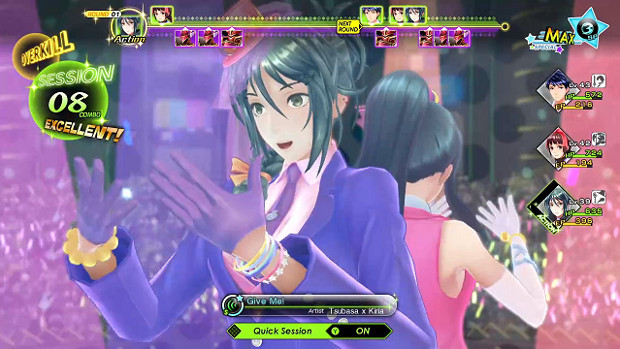 Although, skipping impromptu song numbers in the middle of a fight would make you an utter monster.

Speaking of skipping stuff, the Switch version has a “Quick Session” feature that, when turned on, only shows the last half a second of each session attack. Considering that by the end of the game, you could have well over twenty of them, this is a much appreciated option that really helps speed up the flow of the game. Add to that the vastly improved loading times over the original WiiU version and you’ve got a much more fast-paced game with less waiting around.

While we’re on the subject of additional features, there is a new dungeon to explore with its own little story. Here, you can find a lot of new costumes from various other games in the Fire Emblem and Atlus library, as well as the ability to get three of the non-playable members of Fortuna to jump in on your session attacks for more damage. I can’t say this dungeon is quite as in-depth as the ones you’ll go through in the original, but it’s a fun diversion with some nice rewards, and it ends in another catchy J-Pop number, so what’s not to love? Some of the WiiU DLC is built into this version as well, but it consists of not much more than a way to quickly grind your party, should you wish to do that. The Hot Springs DLC isn’t in this version, because someone decided that putting teenage girls in swimsuits isn’t the best look. And they’re right; the alternate costumes the west got instead are way more tasteful and far more fashionable anyway. Less is more; after all, unless it’s clothing, then more is more.

That said, the jump to the Switch has meant that there is no longer a second screen to utilise, so the display that the WiiU Gamepad would have shown is relegated to the + Button, it’s less elegant than the original, but that’s something that can’t really be helped, even if I find it slightly less convenient than having a full map available at all times. The weird thing is that it doesn’t support touch screen controls when playing in handheld mode, bit of a missed trick, there. 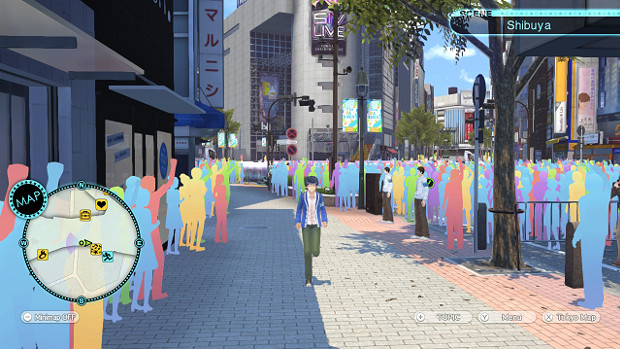 It must suck to be so unimportant to the world that you have no details on your body.

While we’re on the subject of handheld mode, Tokyo Mirage Sessions is an absolute gorgeous game when playing on the go. It’s vibrant to the extreme and really lets the Switch shine in that regard and the only thing I can really criticise it for is that some of the text can be a bit too small for the Switch screen. While I praise the game for how it looks in handheld, the same can’t be said for when playing docked. There’s no resolution improvement at all, it looks pretty much the same as the WiiU version. Still a good looking game, mind you, thanks to its great art style.

As for the sound, it’s top notch. I mean, it’s a game about J-Pop, so it better have some killer songs. Thankfully, Tokyo Mirage Sessions delivers this in spades. I still hum the songs now and again and there’s even a very subtle Splatoon song in there. Which only makes the whole game weirder. The game still lacks an English dub, so all the characters still talk in Japanese. I kind of get why, the game is choreographed to Japanese dialogue, even in normal cutscenes, and trying to get a whole bunch of English singers sounds like a logistical nightmare, but it would have been nice. There’s still no option to have subtitles when you’re in a battle though, which is genuinely annoying. 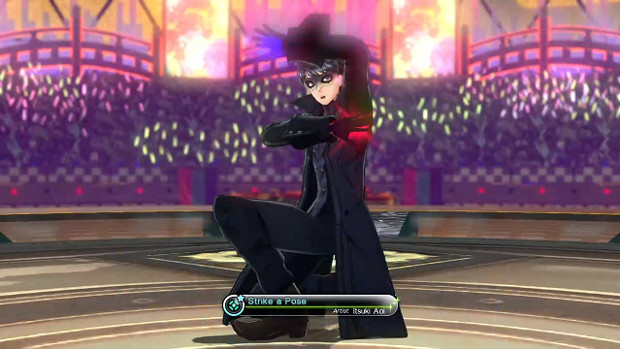 It's the closest you're getting to Persona 5 on Switch.

Tokyo Mirage Sessions was, and still is, an exceptional RPG and if you missed out on the WiiU original for whatever reason and can handle some over-the-top Japanese culture shoved into your face, then you can’t go wrong with this. And even if you’ve played the original, the faster pace, new content and Switch portability make for a pretty compelling argument to take another trip back to Tokyo.

You might want to think twice before playing this on public transport, but if you embrace how ridiculous the whole concept of a J-Pop RPG featuring Fire Emblem is, there's a great time here. Even for double dippers. This truly hits all the right notes.

Excellent Battle System with many layers to it.
Much improved pacing and loading times.
Looks gorgeous in handheld mode.
Soundtrack that will stick in your head for quite a while.

No resolution improvement when docked.
The game can put off some people with all the weirdness.

The game is incredibly silly and if you go into it expecting something more serious, you’re going to be very disappointed. The person who will enjoy this is the person who can go along for the ride and embrace the silliness.