If there's one area where Nintendo has remained pretty consistent over the years, it's in delivering surprises. And it was certainly a big surprise when we learnt that the sequel to quirky Japan-only title, Tomodachi Collection, would be getting released in Europe as Tomodachi Life.

Essentially a simulation game, the main objective in Tomodachi Life is to populate an island with Miis (the limit is 100) and then watch on as they go about their daily lives. Think of it as Nintendo's version of Big Brother. And although referred to as a game throughout this review, in actual fact it isn't really a video game at all, at least not in the traditional sense. The player does not assume direct control of a Mii (not even their own one) and instead takes on the role of the initial Mii's lookalike, the owner of the island who's job it is to help the Miis. Other than during a few mini-games there is hardly any dynamic input required, almost everything in Tomodachi Life is controlled via on-screen menus and buttons. 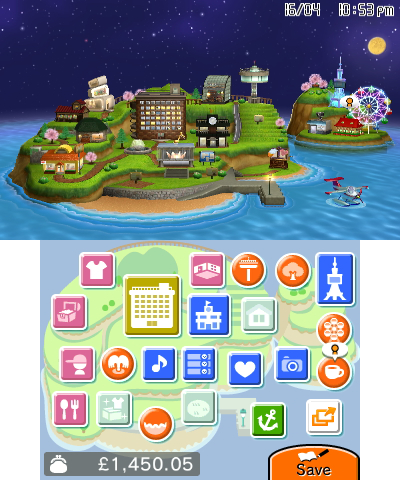 A lot of strange stuff awaits you on this island.

Tomodachi Life starts out as a completely blank canvas, so it's up to the player to name their island and then create its first resident. Several options are available for this procedure, the standard Mii Maker interface, create from photograph, scan QR code, or you can import directly from the 3DS Mii Maker. Whichever method you choose, you will then be introduced to some new Mii settings that are exclusive to this title. The first of which, is a requirement that all Miis have both a first and last name. You must also specify if they are a child or an adult, as this will control which other Miis they can form a relationship with. Another important option once you start adding additional Miis, is to let the game know if and how they are related to you. This will prevent any Miis of your relatives trying to hook up with each other or your own Mii. Which is good, as the game is weird enough already.

Now you get on to what really makes Miis interesting in this game, the speech synthesis. Every Mii in Tomodachi Life has an audible voice, so they will actually verbalise the on-screen text. By adjusting various sliders, you can customise how that voice sounds. Whether they talk fast or slow, have a deep or hi-pitched voice, and so on. Another neat feature here is the ability to correct mispronunciation of names, you simply add a phonetic spelling and the voice will alter appropriately. Finally, you have to give the Mii a personality. There are many different possibilities when setting this, and depending on your choices, the Mii will end up being one of 16 different personality types. This will consequently effect the kind of things they like or dislike, who they become friends with, etc. 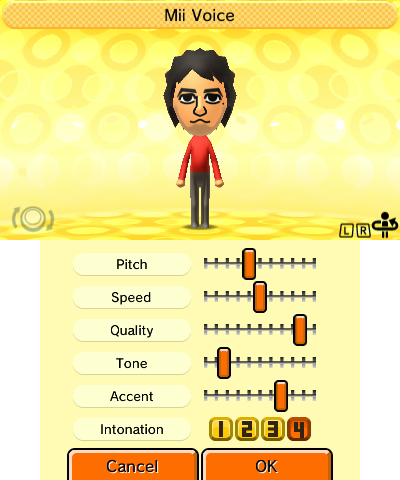 It's quite bizarre hearing Miis speak for the first time.

Once you've added your own Mii and a companion, the Mii Apartment and town hall buildings will appear on the island, announced via a Mii News Flash (these will appear throughout the game, informing you of new areas, features or simply providing entertaining stories). It's then a case of creating or importing additional Miis to fill up the apartment and consequently unlock extra locations and activities dotted around the island. These include a supermarket to purchase food for the Miis, a clothing store, and an interior design shop. Earning the funds to make purchases from these shops is very straightforward, and simply interacting with Miis in their apartment room or offering them a gift will see your money increase automatically, providing they like whatever it is you're giving them.

There are a few ways you can interact with Miis, indicated by different symbols on their apartment window. Occasionally they will have a problem, like being hungry or wanting some new clothes (even getting into fights with other Miis). If you manage to fulfil the request and help them out, it will increase their happiness level, and once enough happiness has been amassed, the Mii will level up. This will allow you to give that Mii a special gift, which could be anything from equipment for them to use, custom phrases, re-styling their room, or even a song for them to learn. 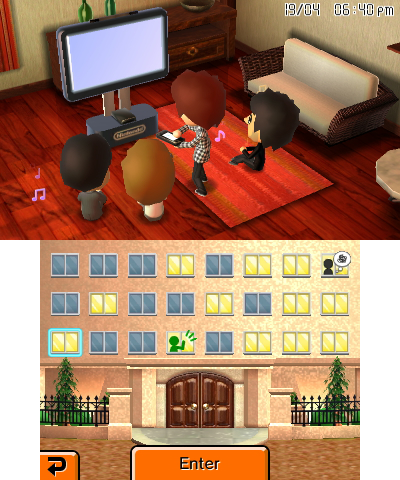 Anyone for NintendoLand? Miis are also partial to a bit of Game & Wario.

Which leads on to one of the most enjoyable aspects of Tomodachi Life, the concert hall. Miis that learn to sing songs as a special reward can visit the concert hall to perform live. There are 8 music genres to learn in total, each one with its own preset lyrics. Just listening to Miis singing the standard songs is incredibly entertaining, but the fun doesn't stop there, as it's possible to edit song lyrics however you choose. This can produce hilarious results, and quickly becomes one of the most addictive parts of the game. Any Miis that have learnt the same genre can form a group (complete with their own name) and perform together. Furthermore, edited song lyrics can be saved for repeat performances at a later time, and once you've created some custom songs you're definitely going to want to share them with others.

Unfortunately however, not all of the activities in Tomodachi Life are quite as entertaining as the concert hall. There are a handful of mini-games you can participate in with your Miis and despite initially being a lot of fun, the problem is there isn't really enough variation, so you will soon find many of the Miis offering to play the same mini-game over and over. This means that levelling up Miis, collecting items (of which there are thousands) and earning money can become a bit of a grind. Another problem with the repetitive nature of the game is when different Miis start to deliver the same dialogue, or have exactly the same dream as another Mii. It's understandable that these sort of things would have a limit to them and therefore need to repeat, but in doing so it kind of destroys the illusion that each Mii is unique. The game has clearly been designed with short-burst play sessions in mind though, and if you only play it briefly each day then you're less likely to experience the repetition so it won't be as much of an issue. 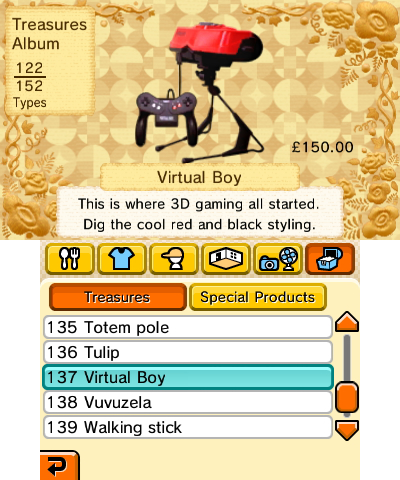 All hail the Virtual Boy!

As far as presentation is concerned, despite the simplistic visual style the game actually features some very nice graphics. There's wonderful attention to detail throughout, with metallic or shiny surfaces giving the impression of being reflective. Subtle but effective use of bump mapping and some nice lighting effects. Not bad for a game centred around Miis. Also, the way photography has been used to display real world objects or the players hands is the icing on the cake, and gives a Pythonesque feel which complements the bizarre style of the game perfectly. Audio-wise things are just as impressive, with every area of the game (the various shops, and even menus) having its own music, and although short, they're seriously catchy. The same level of diversity applies to sound effects, there's an outstanding amount of detail here too, from the sound of Miis chewing on different types of food, right down to assorted fart noises (yep, apparently Miis pass wind quite a lot).

Something else that Tomodachi Life does particularly well is the way it uses the 3DS hardware. Literally every feature of the handheld is implemented at some point. Stereoscopic 3D, the touch screen, the gyro sensor, the front and rear facing cameras, augmented reality, the mic, StreetPass, SpotPass, local wireless... there's even an option to connect directly to the Nintendo 3DS Image Share service, which enables you to upload any screenshots that you've taken in-game to various social media accounts. OK, it's really just a button that opens up the 3DS web browser, but it's another step in the right direction for Nintendo as far as online integration is concerned. And it's certainly useful, as snapping screenshots of your Miis becomes very addictive, so you're likely to build up quite a collection. This is helped by the fact that it's so easy to do, you simply press the X button to take a shot of the top screen, and the Y button for the touch screen. Screenshots can be taken at almost any point in the game, and are saved to the 3DS camera. 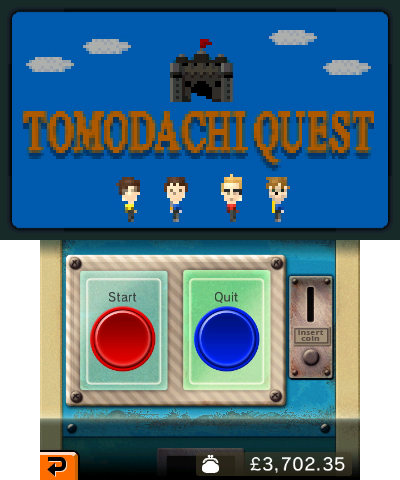 Miis can go on a mini RPG adventure, but only once per day.

Tomodachi Life also uses the date and clock setting of your 3DS, meaning days pass in real time, and it's a game you will want to check out every day (with this in mind, the download version is very much recommended over the retail one). Each day brings new stock to the various shops, another opportunity to utilise features that have a daily limitation, and you'll simply want to keep an eye on your Miis just in case any of them have fallen in love or are ready to propose. That's right, Miis can go on dates, get married and have children. Marriage proposals are handled in a particularly humorous way that also requires the player to be involved, but we won't spoil that here as it's much better if you experience it first-hand.

It wasn't possible to test the StreetPass or SpotPass features for this review, but they appear to function in exactly the same way as the Japanese version of the game. This means you can eventually send the children of your Mii couples off as explorers, and they will visit the island of another player. A nice touch to this feature is how you can actually see the distance they travel, it's also possible for your explorers to return if you StreetPass the same player for a second time. Another aspect of StreetPass is exchanging items, and this also carries over to SpotPass, where Nintendo will distribute exclusive items. 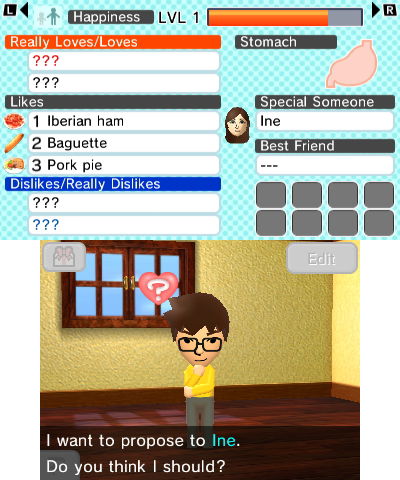 Miis need a helping hand in order to get married.

So that's pretty much everything there is to know about Tomodachi Life, at the end of the day, players will get back whatever they are willing to invest into the title. If you only create a few Miis, and don't really care about customising them, their surroundings or the relationships they will form with other Miis, then Tomodachi Life isn't for you. But if you're the type of person who enjoys games which offer a lot of user customisation, are prepared to create a host of Miis and spend time making the game your own, chances are you will love Tomodachi Life and get plenty of enjoyment from it.

Rest assured there is a lot of fun to be had with this game, but it can take quite some time and effort to uncover.

Tomodachi Life is an incredibly weird and unconventional title. More of an interactive toy than a video game, but a lot of fun nevertheless. It's definitely not going to be for everyone, but is highly recommended to those that enjoy the quirky side of Nintendo. We'd give it a hamburger out of 10, but we had to pick a score.