Ultimate Spider-Man, Treyarch's third web-slinging title on the Gamecube, gives the series a new lick of paint, but it's not enough to hide the cracks…

Ultimate Spider-Man follows the initial tale of a young Peter Parker and his destined run in with that troublesome spider who bestowed upon him all those ultra sweet powers you jump around you bedroom wishing you had. This is explained briefly in the intro via traditional comic book fashion and then leads the player fluently into the game without bogging them down with too much storyline. This leaves the gamer just confident enough with the knowledge of what they have to do and why they have to do it.

From here on the game starts to resemble its previous outing with a city to explore freely (albeit scaled down from Spidey 2) and leaves the player to become accustomed to the controls and experiment with the web slinging before hurtling them into the main storyline. This kind of free roaming is a really effective device for those new to the series so that they can test out all of Spidey's abilities such as: running, jumping, slinging and fighting. It is similarly useful to veterans of the Spider-Man universe who just need to get used to the few changes brought by this instalment. Speaking of such changes Spidey now sports a new single web swinging style as opposed to the multi web fashion found in previous games. The game recreates the slinging very well and it all feels very fluid and well executed. Once you've got the hang of it you will be flying through the New York City sky with grace and ease. It also offers a slight twist for gamers who are used to the previous style.

Another new injection to try and keep the series fresh comes in the form of the big, bad Venom. Fans of Spider-Man will recognise Mr. Venom as the symbiotic alien suit that Parker's father was working on being fused to then 'good friend' Eddie Brock. The game has you play out certain sections as the fearsome Venom and the change in aesthetics is mirrored well by his handling. Instead of simply remoulding Spider-Man into a larger more powerful version of himself the two characters handle significantly different enough to make playing as Venom a break from the norm. Web slinging, for example, is replaced by Venom's superior jumping abilities whilst combat involves the alien suit's tentacles, a slower pace and more strength compared to the agile but weak Spidey. These sections help more than hinder the game as it's fun to be given Venom's strength every so often and just tear up the neighbour hood, throwing the thugs around like mere toys and making giant leaps between buildings. 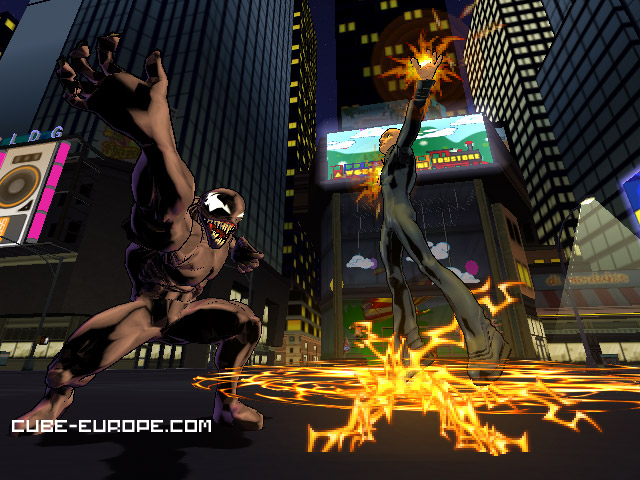 Unfortunately these new features don't save Ultimate Spider-Man from the curse of repetition. For those who have played the previous Spider-Man instalments, once you have mastered the few new gameplay mechanics you are treated to the same kind of missions found in previous outings. These range from some stealth-esque missions (not even Splinter Cell-lite) to 'chasing' enemies across the city. Whilst these chasing sections are new it doesn't take long before they become old and you groan with agony as your forced to keep up with yet another enemy trying to escape the scene. Luckily the occasional boss fight comes along to break up the action. Theses can be quite intense and some even require some thinking to take place to reveal the fiend's weaknesses. These encounters however are few and far in-between and the final boss leaves something to be desired.

The whole game feels like homage to the early comics and with a 15 year old Peter Parker; the colourful graphics do a good job of reflecting this youth. We are of course talking about the use of cel-shading in Ultimate Spider-Man, which is used to great effect in creating a game with a unique sense of style and finesse. Cel-shading (love it or hate it) helps to tell the story well in true marvel fashion with the screen splitting up to make a 'comic strip' effect and adds something new to what is essentially a rehashed version of an almost two year old game.

Musically, the game shines above many competitors with a soundtrack that pumps the tempo up and down effectively in correlation to the on screen events and helps draw the player that little bit further into the Spidey world. The voice acting stands up to a respectable standard with new actors in for the voice of wise cracking Spidey and big ol' baddie Venom (there's no Toby McGuire this time but the actors do a fine job for there respective characters). Add that to the plethora of ambient sounds of the city to make it feel alive and you have a pretty good audio experience.

Unfortunately despite the initial 'wow factor' of the graphics, they soon wear in and the core gameplay just cannot hold it up for long enough to be a stand out game. This not to say that Ultimate Spider-Man is a terrible game, it simply lacks enough new features and relies too heavily on re-imaginings of past ideas, creating a game that doesn't quite hit the spot it aimed for. This is a shame, as the game has a lot to offer for those willing to accept it for what it is.

Worth buying for fans of the Spider-Man series, but lacking anything really original to make it a stand out to the average gamer.

Repetitive
Nothing really original to be found