Urban Trial Playground is the latest entry in a genre that largely became popularised almost a decade ago with Trials HD on the Xbox 360.

The player takes control of a customisable male or female character riding a motorcycle through a selection of obstacle courses set throughout a variety of sunny locales either in an attempt to reach the finish line in the best possible time or achieve a high score by performing stunts.

While all of the characters, bikes, ramps, trees and houses are created in 3D, the action takes place along a two-dimensional plane viewed almost side on with no possibility to navigate your bike in any direction other than forwards and backwards. 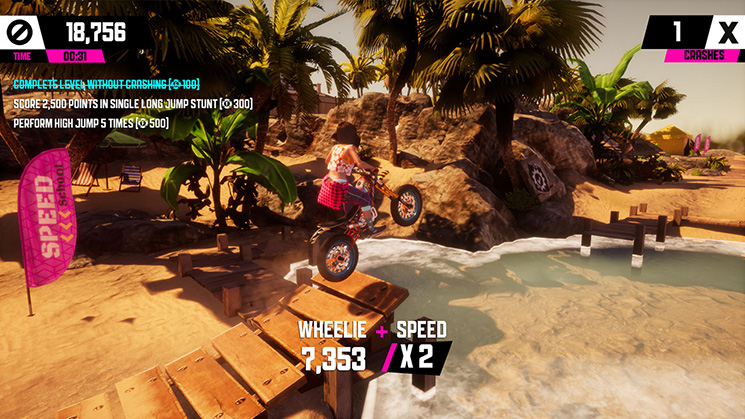 The controls are easy to grasp with A to accelerate, Y to reverse, X to reset to the most recent checkpoint and several buttons available to take care of ducking and jumping, both of which work best controlled with the left stick. Riding the motorcycle feels as straightforward and satisfying as you would expect with no issues to hamper your progress and enjoyment.

Jumping off ramps gives you the opportunity to perform front flips and back flips with a simple tilt of the left stick either forward or back with more points and increased combos available by landing on only one of your wheels and carrying that into the next trick.

It’s all fairly uncomplicated but, unfortunately, that’s all there really is to performing tricks. If the shackles were taken off to allow for crazy combos and more flamboyant tricks through an assortment of button presses, the depth and joy the game could offer would be significantly increased. As it stands, the current system fails to deliver any real satisfaction once you master it and doesn’t offer any real room for expert players to express themselves.

Whether racing to the end of a stage or tricking your way up the rankings, the main objective of each area is to obtain as many stars as possible to unlock more courses. There is a maximum of 5 stars available in every level with bonus challenges offering the chance to gain money which can be used to purchase and customise parts of your motorcycle or character. Casino-style chips are also scattered throughout to acquire further currency and make you consider different routes through each of the 54 stages. It certainly helps add variety and a little longevity to the game though it should only take around 2-4 hours to see everything. 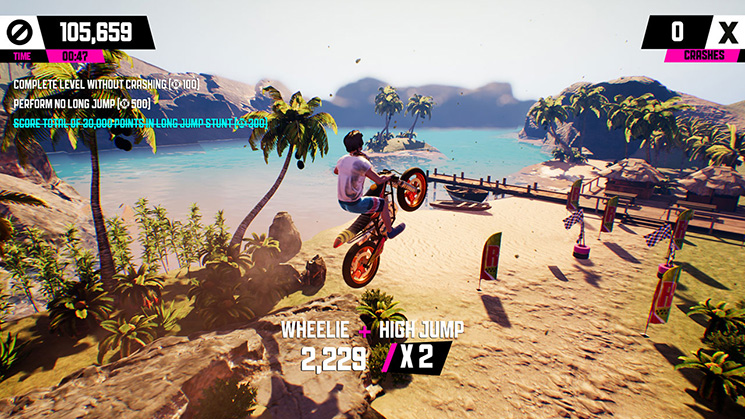 There is a multiplayer mode available for two players but it is unlikely to keep either player entertained for long as you compete against each other or chase each other down in split-screen.

Graphically, Urban Trial Playground is decent without ever reaching beyond. The overall visual style and menus are certainly pleasant and colourful enough but a lack of sharpness and detail holds the aesthetics back.

In terms of audio, the music and sound effects fit the game well but none of the tracks are likely to stick with you beyond your latest session.

Regrettably, it must be noted that the game crashed on several occasions without warning. Even though the stages are brief enough that there is never likely to be any significant amount of progress lost, it’s far from ideal and the issue will hopefully be rectified at a later date. One other minor criticism is that going back to stages to improve scores is made inconvenient by having no straightforward way to go back to the level select screen without exiting out entirely to the main menu.

Urban Trial Playground is a likeable game that will provide a few hours of entertainment whether racing through to the end of the game or going back to defeat all of the challenges and collect everything. Everything the game does it does reasonably well without excelling beyond that which is a shame as the basis for a really fun game is here.

Riding the motorcycle feels as straightforward and satisfying as you would expect with no issues to hamper your progress and enjoyment.