Wario is finally back hosting his crazy barrage of mini-games in the series debut for 3DS!

It feels weird saying “series debut” and “3DS” in the same sentence when the handheld has been out for 8 years but here we are – better late than never!

When the 3DS was first released in 2011 my much younger and more innocent mind was racing with thoughts of how great the mini-games could be on a 3DS WarioWare game. Touch screens, mic’s, gyro controls, a 3D display – Imagine all the different ways we could poke noses on this thing! So, has the wait been worth it?

For the uninitiated, WarioWare is a game that throws endless mini-games at you one after the other, increasing the speed and complexity as you progress to a higher score. Each game is around 5 seconds or less and has you doing all manner of random things such as slicing fruit, jumping over hot dogs or walking in rhythm with a bunch of ducklings. With just 4 lives, you have to get the highest score possible by running with the D-Pad, touching with the stylus or twisting your system like a Wii Remote in 2006.

It’s not always the actual game itself that’s hard, it’s the quick thinking and short time-span that is required of you which you need to master. 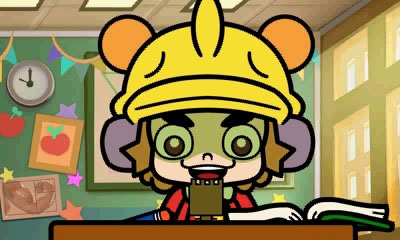 Despite not being in 3D, the cutscenes are still vibrant.

WarioWare Gold is much like Rhythm Paradise MegaMix in that it’s a mixture of new and old content. You might recognise familiar favourites such as the depressed girl sniffing her discharging nose or the silly cat walking aimlessly on a rainy night but each of the old mini-games has been re-made, dressed up, polished – However you want to describe it, they all have a nice new art style and look clean and fresh. While this new look certainly brings all of the games together under a relatively similar aesthetic and look nicer on a technical level, I did sometimes miss the crude nature of the pixelated drawings and scrap book feel that the randomness in the old titles gave.

The game presents you with mini-games in a similar way to previous titles through a Story Mode. Games are split into three categories, ‘Button Mash’ for the classic GBA style gameplay, ‘Touch’ for DS style games and ‘Gyro’ for Twisted. Each of these 3 sections has a story mode with 5 chapters, with one classic WarioWare character playing host to each. 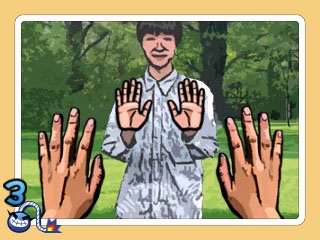 Go on, push him over! Wario dares you to.

You have from around 8 – 20 mini-games and a boss game to complete in any given chapter, and when you have done that you can go back and play again in endless mode to get the highest score possible, again, just like the classic games of yore.

When you’ve completed all these sections you’ll make it into the final 3 chapters which mix all of the games together and shout which style of play it is before the game starts, much like in Smooth Moves where it would quickly tell you which way you should be holding the Wii Remote. The mixed up chapters also have some Mic games and even quicker mini-games thrown in. 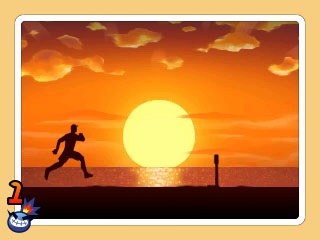 You’re rewarded with coins when you pass a section, or every time you beat the boss mini-game in endless mode, and these can be used towards unlocking some really neat gifts in the Toy Room such as Smash Bros Trophy style info panels about Nintendo’s past to fun quirky things that the Toy Room’s of old were famous for, such as one where Wario crudely draws an Amiibo that you place on the 3DS or the ability to record your own lines of dialogue for story mode.

Speaking of story mode, it seems that Nintendo have leant a lot from their previous mistakes. In WarioWare Gold, all of the cut-scenes are fully voice acted, which is both surprising and a welcome addition. Not only that but the scenes are shorter than the ungodly length of some of the scenes found in Smooth Moves and they’re instantly skippable even on the first play if that’s not your kind of thing. 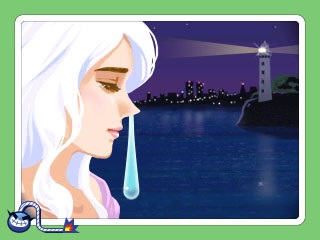 Err... excuse me, you've got something... nevermind.

While there are masses of classic mini-games that are still just as fun to play as they were in the early 2000’s, there’s also a whole host of new mini-games sprinkled in-between and a horde of gyroscopic ones which us Europeans will especially revel in given that we were denied access to the wonderful Wario Ware Twisted on GBA all those years ago.

Series veterans will instantly notice when a new mini-game is slipped between familiar classics as that feeling of confusion of an unknown objective hits like a bad head after a vodka fueled night. The inclusion of modern-day objects is also oddly jarring in the newer minigames - Just like seeing Bart Simpson holding an iPad in a new series of the hit Fox show, it’s really bizarre to see WarioWare characters wielding smart phones in what has always been such an early noughties series. 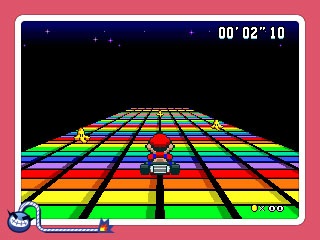 The minigames are all tremendous fun though, whether it’s an old classic, a new one or a previously unplayed WarioWare Twisted game, they all feel as random, wacky and innovative as the series ever did.

Everything is presented wonderfully in this package and there are loads of different modes and chapters to play these crazy mini-games in. The only gripe I have, and this is quite a big one, is the lack of 3D. There’s no 3D at all in the title, which is a grave shame as I know the WarioWare team could have done some wonderfully inventive things with it. It’s just one of the drawbacks of releasing on the 3DS so late – If this we’re released in 2015 or earlier you can bet we’d have had all sorts of stereoscopic fun.

Fans of WarioWare will have a great time with this title, packing a whopping 300 mini-games this is the biggest in the series to date, with a perfect blend of classic games and innovative new additions. And if you haven’t played a title in the series before, there’s no better place to start than here.