The Switch catalogue is an embarrassment of indie riches at the moment, with many beloved and unique titles making its way to Nintendo’s newest console. Santa Ragione’s Wheels of Aurelia is another such title, having previously been released on other formats it is now available on the Switch.

The game is essentially interactive fiction with a mild driving sim to carry the story forward. The whole game is set in a car (you choose the model and colour at the start) as you make your way down the Via Aurelia that connects Roma with Pisae in the North-West. You start the journey with Olga and can pick up hitchhikers along the way, as well as come across various conflicts.

As you drive you converse with your passengers, with the ability to either stick with Olga or change to your newest hitchhiker as you pick them up. You have three possible responses at any given time (if you include saying nothing) which you select with either the directional buttons on the right stick. 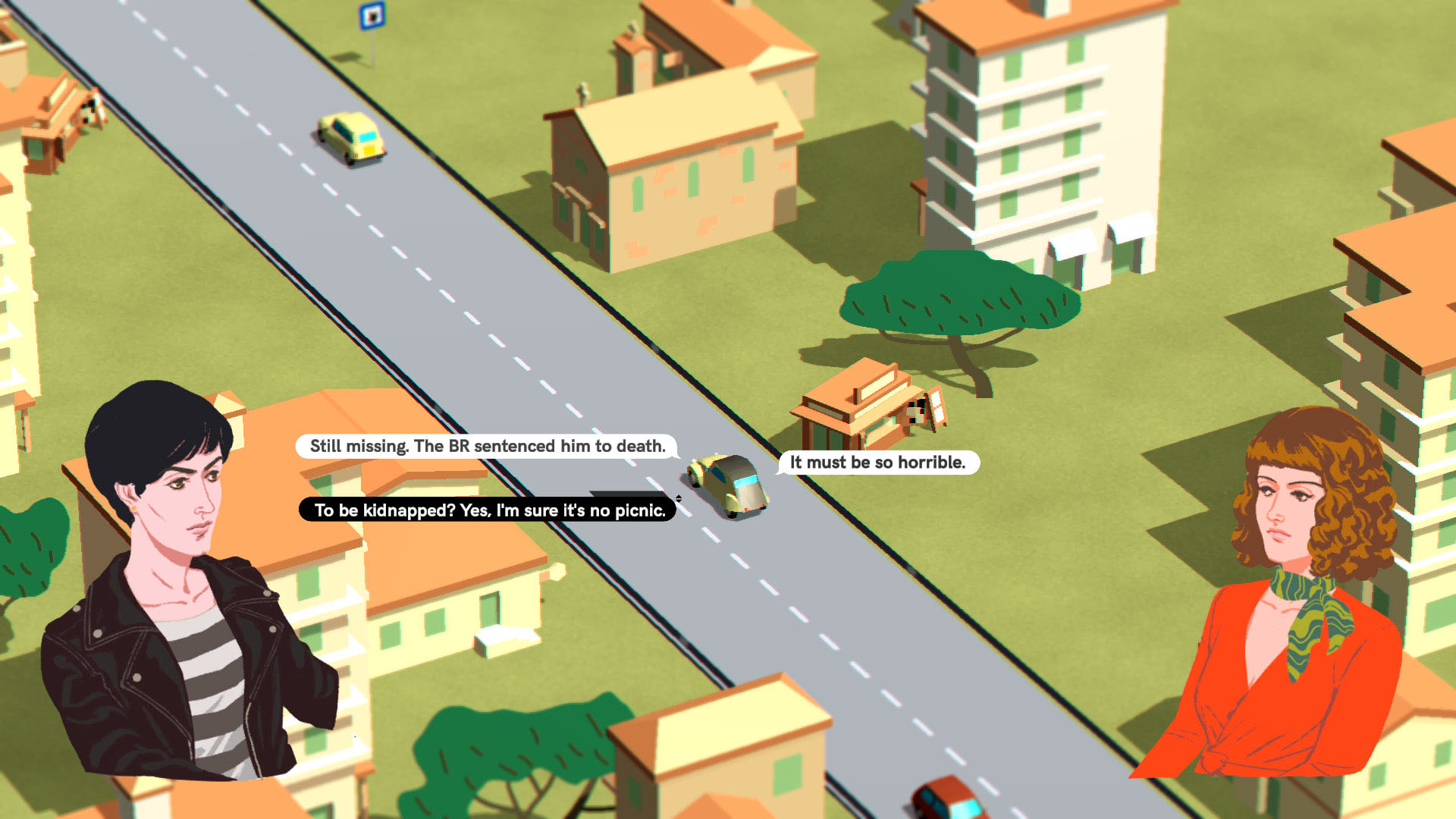 You move the car with the left stick and hold A to go faster (both while driving and while conversing) so choosing responses always feels a bit awkward, but thankfully the driving isn’t the important part. It feels most natural, and manageable, using the Joy-Con grip in my experience.  You can crash and bump into other cars and the edge of the road, but the worst that happens is someone beeps a horn or you bounce a bit, almost comically.

Wheels of Aurelia has 16 different endings you can come across and each play through lasts about 5-15 minutes. That may not sound like much, and obviously isn’t going to keep you occupied as long as Breath of the Wild but if exploring different routes (both literally and metaphorically) is your kind of thing it will be a fun challenge to try and figure out where you need to go, what you need to do and what you need to say to get each of them.

There are key narrative points tied into the city stop points where a particular passenger exits or a new character is introduced, so when you start a new session you often find yourself repeating the same conversations you’ve seen before. You can speed up the dialogue by holding down the A button, but it can still become annoying after you’ve seen it a few times or done the same challenge. 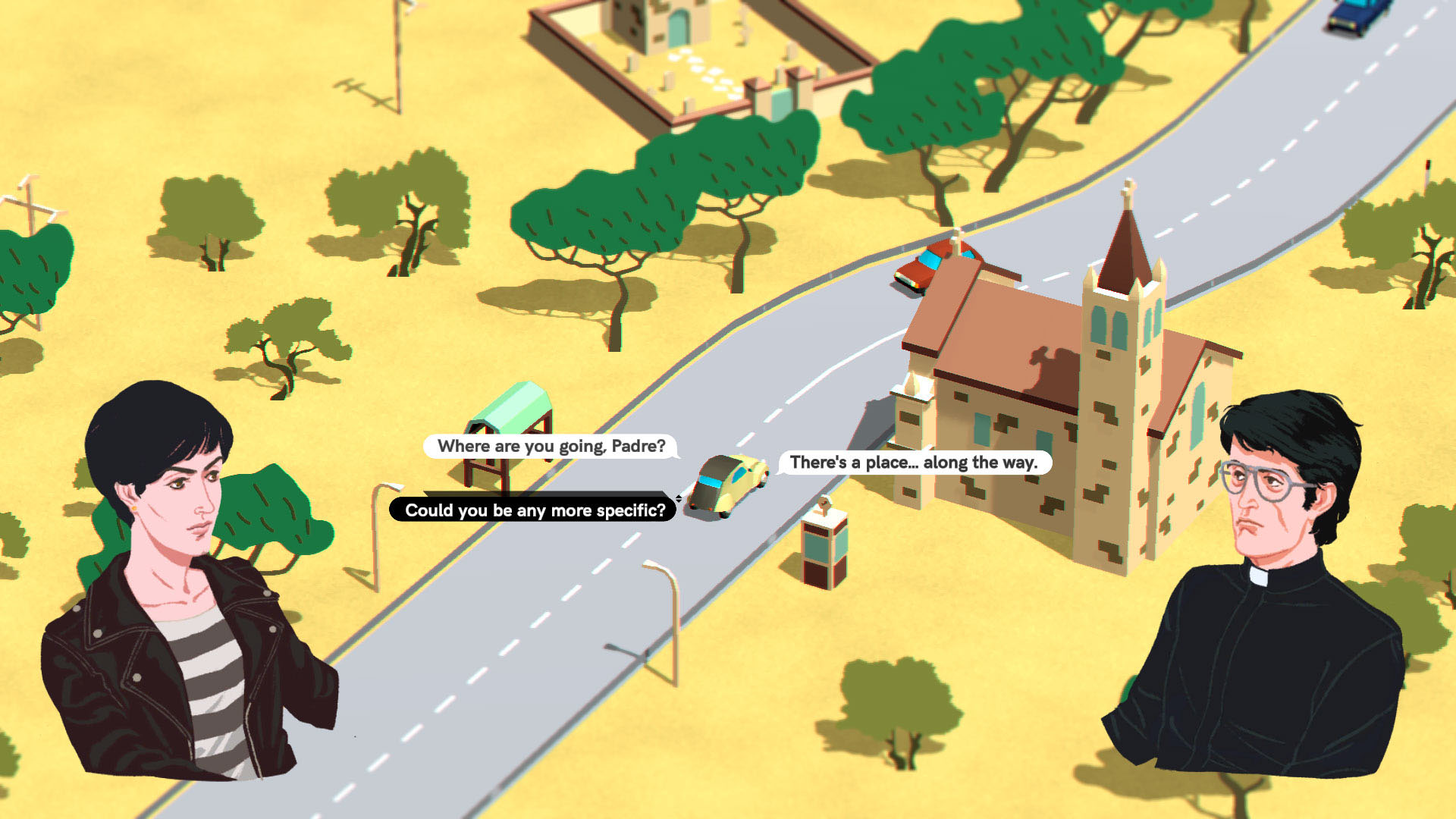 The writing in Wheels of Aurelia is the star of the show. You play as Lella, a young woman in 1978 Italy with a troubled past and a strong mind, but each of the characters you come across have distinct voices and personalities. The relationship between Lella and Olga, depending on which storyline you play through, can be sweet and supportive or more terse, while the characters you come across vary from the weird but harmless (someone is obsessed with UFOs) to violent and sexist.

When I started playing I was surprised by some of the conversations that were featured on there, it was unlike anything else I’d seen in a video game. Nowhere else have I ended up in a car race with a Fascist while trying to comfort my pregnant friend as she travels to France for an abortion as we discuss Italy’s oppressive abortion laws.

The game doesn’t shy away from weaving in Italian history into its narrative. There is a good chance a lot of what is being discussed isn’t something you’ll be familiar with, unless you are familiar with Italian political history of the 70’s, but that doesn’t mean you can’t enjoy the story for what it is. Real-life events such as the kidnapping of Aldo Moro and the Bologna Station terrorist attack are referenced, but you don’t need to know the details to follow along (although I recommend reading up afterwards). 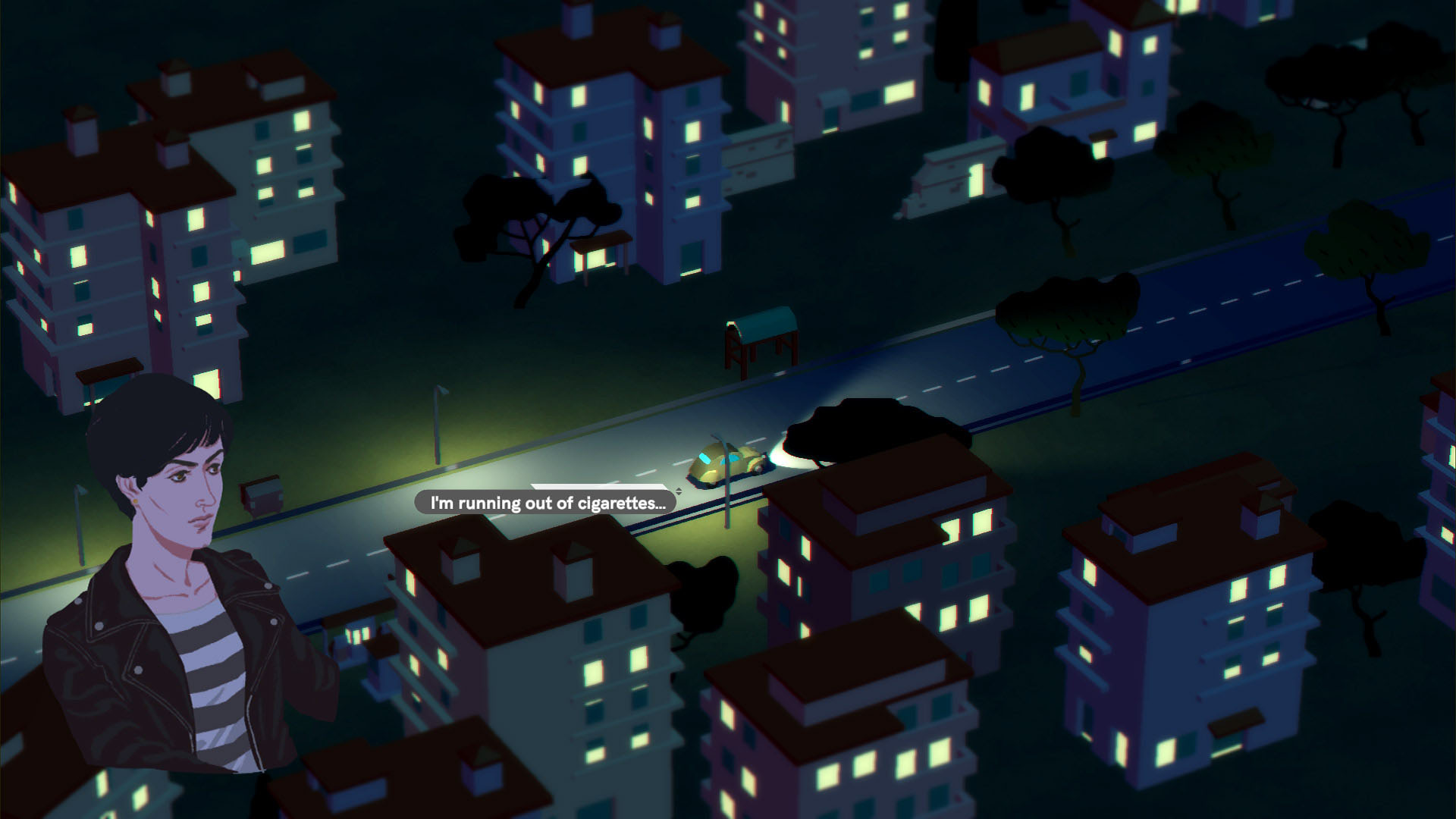 Anyone who knows me knows of my fondness for Italy so when I heard about this game earlier in the year I knew I had to check it out. There’s the odd touch I can get (even if it's just the use of Italian phrases such as sarcastically talking about “la dolce vita”), but a lot of the history was new to me and it has been an unexpected source of information.

The soundtrack for this game has a nice 70’s vibe that fits in well with the setting. You can even listen to it for free online, or support them by paying for it. It is even worked into the story of the game, with occasional requests to change or switch off the radio station that is playing these songs.

The art style is simple but pops on the screen. The illustrated images of Lella and her passengers work well and have subtle changes at times, although sometimes your eyes are too focused on the road to notice. The surroundings are rather simple repeated pieces of decoration, but it gives the game a feeling of being a somewhat-hazy memory. The real visual highlight are the illustrations found in the background when you get to a new area and at each ending where they serve as backdrops as the game explains what happens to the characters afterwards.

Wheels of Aurelia isn’t a long game and isn’t for everyone, but if you want an interesting take on a ‘conversation sim’ that is easy on the eyes and has some fantastic characters then I really recommend it.

Your enjoyment of Wheels of Aurelia will live and die based on your interest in dialogue-heavy narrative. It doesn't shy away from key issues in Italy's recent history and is refreshingly unique, but not for everyone.

Short
Driving and talking difficult to do together

[In no other game have] I ended up in a car race with a Fascist while trying to comfort my pregnant friend as she travels to France for an abortion as we discuss Italy’s oppressive abortion laws.