When Xenoblade Chronicles 2 was announced at the official Switch unveiling in January and advertised as launching "in 2017" I am sure I was not the only one who scoffed. This was not, I should point out, anything to do with the quality of the potential title or the two previous games in the series, but more that a game this big and with this much scope would surely never be out in time for Christmas.

Well, I have been proven wrong. With Zelda, Mario, Splatoon, Mario Kart and Arms all behind us for the year, the last big Nintendo game for Christmas has arrived. And mentioning those other games raises an interesting point; while Xenoblade may not be the greatest game of the year, it does compliment and fit into Nintendo's first party strategy incredibly well, almost like they had a back up plan in case we had another Wii U style drought from third parties, and provides a different experience from those other games which, if you had only been buying Nintendo games throughout the year, would be perfect timing. As it is, this is a great game within that context and on its own two feet as well.

Initially I was pleasantly surprised that there was no massively long and cumbersome introductory cut scene, instead you are thrust almost straight into a battle and your adventure begins. However, over the first few hours or so, a lot of exposition is set up and meaty cut scenes or short sections followed by another cut scene set the story up. Again to use the counter point to other games reference, whereas Zelda almost let you get on with it and find story as and where you wanted, Xenoblade forces it onto you and makes you well aware of what's at stake and where you need to go next. That is not a criticism at all, in fact a bit of heavy story is perfect compared to those other games. 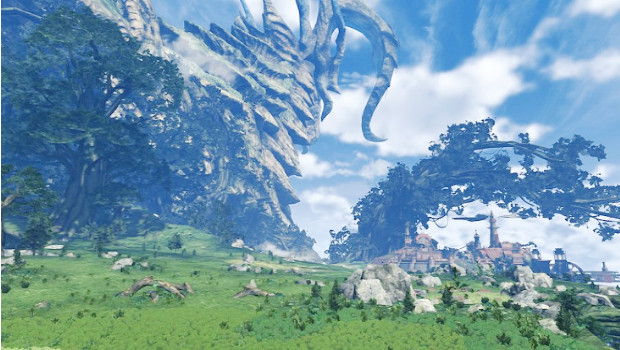 A whole new, massive world to explore, are you ready? There goes the rest of 2017!

The main focus of your adventure and the playable character is Rex, a young scavenger with a dodgy accent (more on those later...) who lives aboard his titan, Gramps. There is a lot of mythology in this game that harkens back to the original Xenoblade Chronicles game, and the titans certainly feel like an extension of what was set up in the original. In fact, to put it bluntly and just in case the number 2 after the title did not give it away, this is a sequel to Shulk and the gang's adventures with the Monado. Whereas Xenoblade Chronicles X on the Wii U was almost a separate entity, this game belongs as the next chapter to the first one. Although it's not a direct sequel in terms of "you need to play the first to understand this one" they do share the same DNA in graphics, music and overall vibe; the world of Alrest feels incredibly similar to the environments on the Bionis and Mechonis.

The DNA also extends into the gameplay and battle systems as well, albeit with new features as a sequel would suggest. You control Rex and his party throughout the over world in a similar way to both previous entries, engaging in battles, conversations and sub quests at your own choosing. Although battles and sub quests are completed at your own discretion, they are very much advised. Although I never came across any XP brick walls like in X, it goes without saying that if you don't level up you will come across a boss or enemy that no matter how skillful you are in combat, you simply can't beat them. Anticipating this, I tended to engage all enemies within my XP range in battle straight from the off, which meant I never felt under powered when encountering initial larger battles. 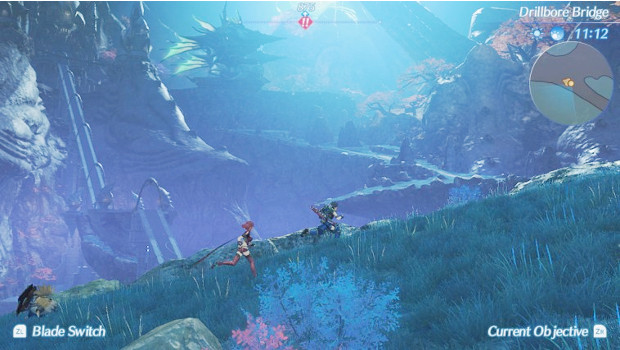 Some truly beautiful locations to explore, not too bad for an early Switch title!

The crux of your battle system here though is the link between driver and blade. Pulling off automatic attacks builds your meter and this in turn allows you to unleash more powerful attacks, enough of which builds up the in a battle link between you and your blade and lets you perform a special move, or build it up a few more times for more devastating effect. Like all good Japanese RPGs, this system can seem incredibly complicated, certainly initially. The game does hold your hand through it to a degree but it does require a lot of attention to get the nuances of the battles system just right. Failing that, and some what disappointingly, you can almost button mash your way to victory against similar level foes. Honestly, at points near the start I found myself so frustrated with it that I hammered buttons and still won. Against bigger and better opponents, however, you need to learn your trade correctly and the old cliché of the more effort you put in the more you'll get out definitely applies to the battle system and skill tree options here.

Stylistically the game is a bit of treat, drawing inspiration from anime to create wonderful facial features for its lead characters. This is an area where a huge improvement has been made from the previous two games and it is glorious to watch it all come to life in cutscenes. The overall game itself is not a graphical marvel, sadly, drawing more in comparison to the Wii original than to something like Breath of the Wild. It takes a bigger hit in handheld mode as well. It is still very playable but the game suffers quite a bit when you undock your Switch. A mischievous sense of humour pervades the game and the characters that inhabit it, with slap stick comedy and the occasional naughty word raising laughs as and when they should. I also found myself getting a whiff of Skies of Arcadia while playing this as well; perhaps it was the quasi nautical themes running through it or that Rex shares more than a passing resemblance to Vyse, but I definitely felt vibes of the Dreamcast classic running through my adventure. 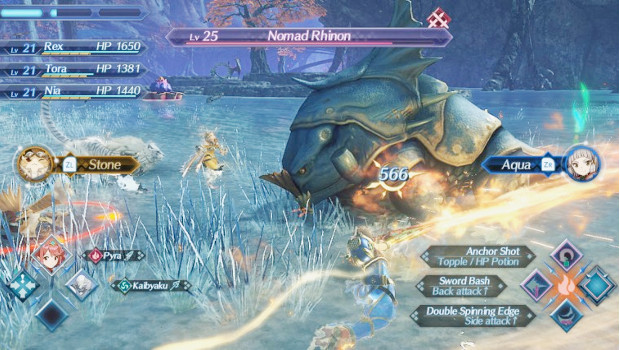 Battles! Expect plenty of battles, with lots of enemies... just try not to take on anything too big.

The voice acting skirts the incredibly fine line between so-bad-it's-good and just plain bad, with as many regional dialects as you can think of being represented here. In earnest, I found that played rather well, in that it gave the game an almost Game of Thrones style feel in terms of the scope of the land and it made each area feel unique. Sadly the acting itself is very hit and miss. It's difficult to tell whether it's the direction or perhaps last minute changes to cutscenes that make the way a line is delivered seem jarring to what's on screen. It can be off-putting to say the least, if not unintentionally funny. When you have a character like Pyra who is voiced tremendously well with charm and nuance it shows up some of the other strange choices made. A day one patch which will allow the Japanese voice acting and subtitles to be chosen is a welcome one, although you will be missing out on Nia exclaiming "I'm knackered" after battle in a Welsh accent which almost redeems the rest of it.

Orchestrally however this game is an absolute delight. Previews of the soundtrack have been released on the Switch and YouTube, and it really is an epic and beautifully constructed  soundtrack that compliments the game very well. To go back to the comparisons, this is an area where Xenoblade trumps Zelda hands down; while the latter relied on delicate ambient music and natural noises to supplement the gameplay, this game benefits massively for having a soundtrack on a scope with the rest of the game. Whether you're in battle, mid cutscene or roaming around the huge world, you always have an appropriately epic accompaniment spurring you on. 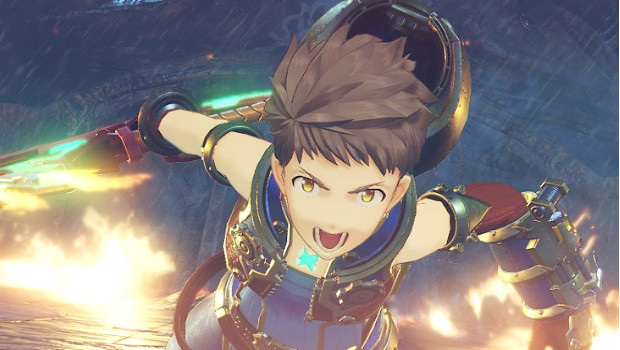 Rex is clearly fired up and ready for revenge! Or someone insulted his voice-over, one of the two.

The longevity of this game is, as always, what you make of it. The main quest that provides the thread line through the game is meaty enough, yet in sub-quests and levelling up characters the game takes on a whole new dimension. You could easily lose hundreds of hours into Xenoblade Chronicles 2 and still not see everything. Throw in trading, buying, selling and all the NPC characters you can chat with and you're looking at a substantial single-player experience, which as I have mentioned in previous reviews is almost a necessity for Switch games if you consider the portability factor.

Xenoblade Chronicles 2 is a deep, rich experience that rewards patience, graft and perseverance. Once you've got through the opening ten hours or so the game opens up to you and your left with a breathless example of a great RPG. It can be text and system heavy (I did just say it was an RPG...) But those willing to push through any initial misgivings will be rewarded with a fun and time consuming adventure. It may not be perfect on its own, but as Nintendo's final first party offering of 2017 it is the final part of an incredible jigsaw that has given Switch owners every reason to celebrate a phenomenal year for the system.

Xenoblade Chronicles 2 goes back to its roots and builds on the 2011 Wii original. It may not be perfect but it's a great game that will see you through Christmas, the New Year and well into 2018. As Nintendo's final first party game of the year, it caps off an incredible year of software for the Big N.

A mischievous sense of humour pervades the game and the characters that inhabit it, with slap stick comedy and the occasional naughty word raising laughs as and when they should.