Writer's note: The review version of YesterMorrow we played has several performance issues like stutters, framedrops, graphical and audio glitches. After contacting the developers, they have stated that they are aware of the issues, and a patch which will improve performance and fix several softlocks and glitches, is ready to go live a couple of days after the release of the game on the Nintendo eShop. The current state of the game has been taken into account of the review as you can read below. We expect performance to increase after the patch arrives which may lead to a higher final score.

Having the power to go back in time, I’m sure that is something we have all wished for at some point in our lives. It does become reality for Yui, a little girl and daughter of a Timekeeper, who at the start of the game YesterMorrow is preparing to celebrate the village’s festival.

Dark forces disturb the festival however, leaving the village destroyed, and Yui’s father presumed dead. Fast forward to the future, where an older Yui is still struggling with the past events, and the village is still wrapped in darkness. It does not take long though for Yui (being the daughter of a Timekeeper) to learn to control the power of Everlight, and with that comes the power to travel back and forth in time using portals scattered around the land. 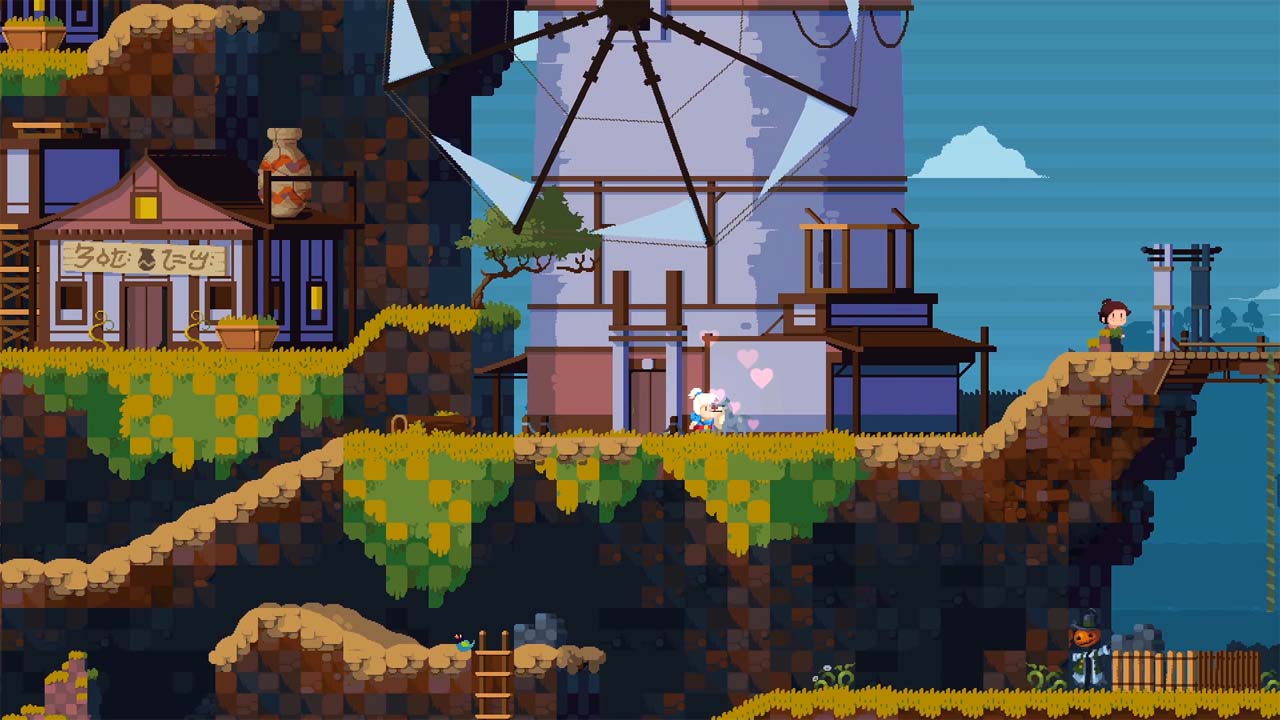 Yes, you can pet the dog (and other animals!) in YesterMorrow.

From that moment on, it is up to Yui to save the world from darkness, stop the Neverending Night, and bring back light to your world. To do so, you must travel through different lands, make your way through temples, collect more Everlight skills, and vanquish corrupted bosses.

The mechanism of travelling through time is very promising, with near endless possibilities. It is unfortunate that this mechanism is not coming to full fruition in YesterMorrow. Most of the time this means that a pathway is cut off either in the past or present, with a conveniently placed portal closeby. Or you would have to press some switches in the past to activate platforms in the future. It is not the butterfly effect you may have expected.

Luckily, there is enough to do besides travelling through time. On her journey, Yui will pick up a number of abilities besides time travelling. Using the power of Everlight, she can learn to throw bombs, double jump, do a ground pound, and more. Nothing groundbreaking there, as we have seen it all before in games such as Ori and the Blind Forest. But the moves work, and Yui moves around mostly fluidly.

I say mostly, because unfortunately the game does not run buttery smooth. I encountered some graphical glitches in the early parts of the game, which were annoying, but not game breaking. There are quite some noticeable stutters and hiccups as well, mostly when saving at an altar or when a number of enemies pop up. The game also seems to struggle with lighting, as the framerate drops off when you enter areas with a lot of lit lanterns in it. Also in a busy boss battle or a gauntlet do these drops happen, occasionally leading to a missed jump or a hit. You will die plenty in this game, and if it is because of your own skills, that’s no problem, but if it is due to performance issues that is a bad thing indeed. I had a feeling it happened more often in handheld mode than in docked mode. Here’s hoping these flaws can and will be patched out.

G-glitch! Luckily this kind of glitch only happens occasionally, and a patch is on the way.

Because, as said, there are good things to say as well about YesterMorrow. The general atmosphere is very pleasing, with an ambient soundtrack to accompany it. The graphical style reminds me somewhat of the Sonic games, especially how the ground is made up with the little squares in it. It has a very pleasing aesthetic to it.

Some platforming bits are challenging and creative, and there are even some harder optional trials you can take on, leading to collectibles that fill in the lore. Boss battles are a highlight; although frustrating at first, they revolve around learning attack patterns, knowing when to strike, and what ability to use. And there are dozens of animals scattered in the world, who are waiting for you to pet them. Just finishing the game will take around 7-8 hours, and after that (or before triggering the final scene) you can spend some extra hours completion hunting. 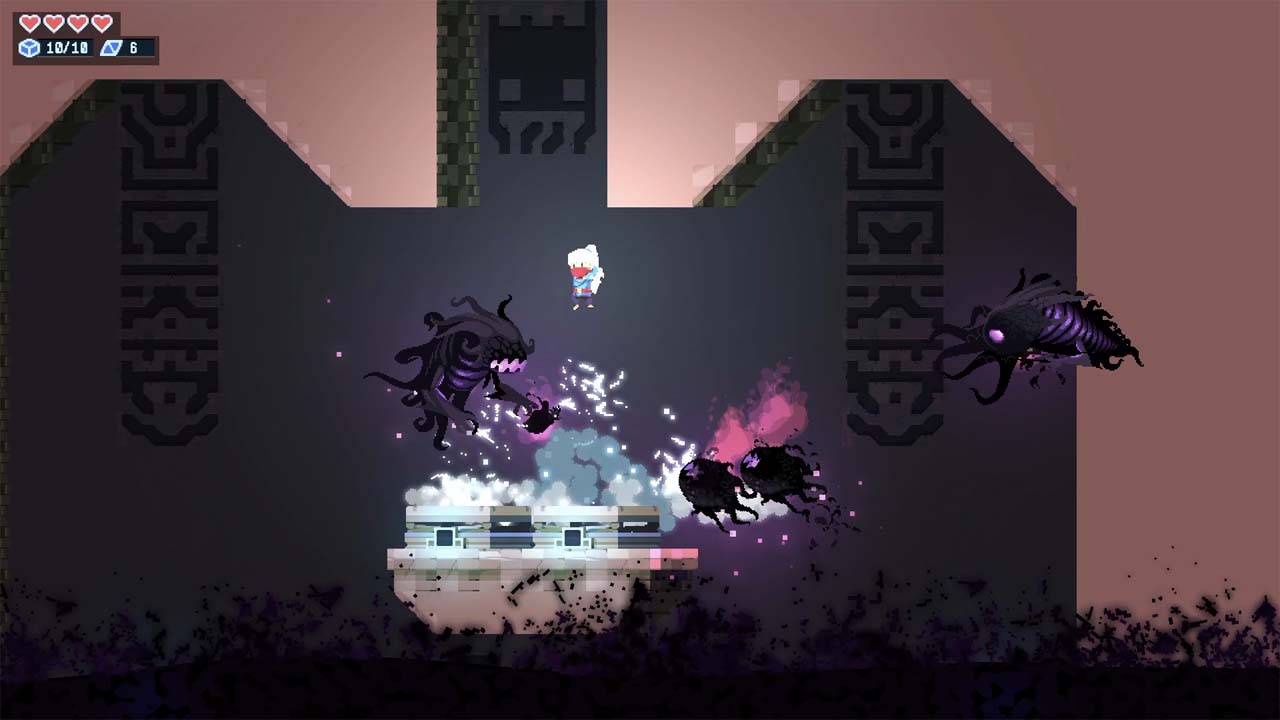 These creatures of darkness are giving off a serious Ridley Scott's Alien vibe.

There are a couple more things off, though. Aside from the previously mentioned stutter, there are segments where it feels like the sound effects are timed wrong. Moving stones and platforms make a scraping sound that somehow comes earlier or later than the actual movement. This is quite confusing in a specific temple that is focused on timing and rhythm. I also came across several moments, when I was backtracking a bit, where an old dialogue or cutscene retriggered. Further, there were a number of other glitches like switches not working (having to reload a save state), or places where I glitched through a wall or floor. These take away from the feeling of polish and overall immersion in the world that the Slovakian studio Bitmap Galaxy have created, and may be a sign that the game could have used a couple of extra weeks to clean up.

Indie games have come a long way, and with games like Hollow Knight, Axiom Verge, and Shovel Knight on the market, you may forget how impressive it is to make an indie game with a relatively small team. Truth is, though, that these games have raised the bar, even for small devs, and that it is getting harder and harder to develop an indie game with that wow factor. YesterMorrow has quite some potential, and despite its shortcomings, I kept wanting to push on and finish it. As a platformer, it definitely has its good moments. But it has not left a lasting impression, and there are too many flaws to justify a higher grade.

Full of glitches, stutters and framedrops in its current state
Moveset of Yui is nothing we have not seen before
Time travelling concept is not used in an interesting way

Having the power to go back in time, I’m sure that is something we have all wished for at some point in our lives.