When Yooka-Laylee was originally released on other platforms in early 2017, we were living in a world where the affectionately (or not) named ‘collect-a-thon’ style of 3D platformer hadn’t been resurrected so spectacularly in the modern era by the exemplary Super Mario Odyssey. With Yooka-Laylee finally making the switch to Nintendo’s latest console at the end of an impressive year for the system, can the lizard and bat duo stand up to the might of Mario as Banjo-Kazooie had done back in the 90s?

It may be unfair to compare an indie platformer to one of Nintendo’s biggest franchises but the timing of this release may leave many with a decision to make on which game to pick up in time for the festive holidays.

While Mario may have come along and delivered a platformer that perfectly blends memories of classic titles with contemporary game design, Yooka-Laylee firmly prides itself in effectively reviving Banjo-Kazooie, warts and all. With Playtonic, the game’s developers, consisting of a number of key Rare developers from that particular period, it’s perhaps no surprise to see them create something that takes inspiration from a series than many herald as one of their greatest and from a genre that thousands of backers kickstarted to see return.

In that sense, Yooka-Laylee is something of a success. 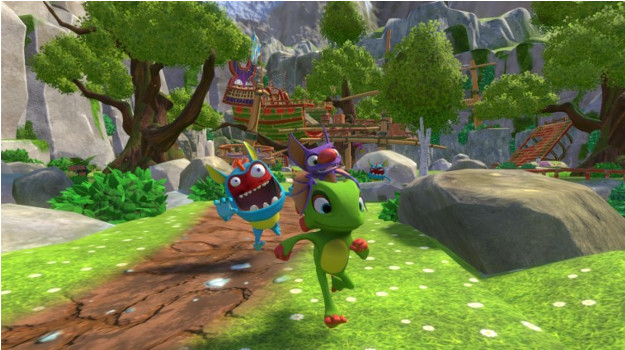 Yep, this is a Nineties platformer to the core, hub world and all.

Yooka-Laylee very much feels like a Banjo-Kazooie game in all but name from the myriad of collectables to the level designs, puzzles, platforming challenges, sound design and even the font used in speech bubbles.

The game starts out with Yooka, the lizard, and his bat partner Laylee setting out to retrieve pages of a magical book that has been stolen, along with the rest of the world’s books, by the evil Capital B and his assistant Dr. Quack.

Through exploring the hub world of Hivory Towers, you can eventually gain access to five large worlds of open world style adventuring, starting with the traditional grassy expanses of Tribalstack Tropics. 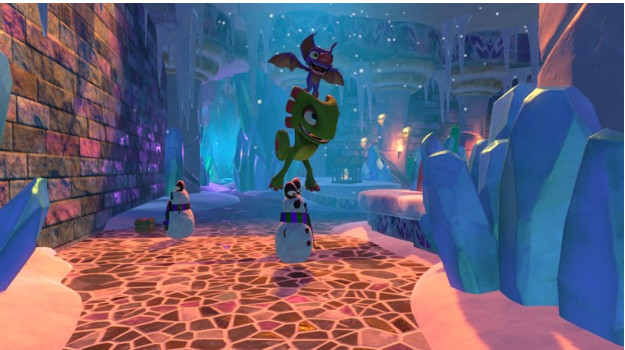 Each of these worlds can be expanded by collecting a certain number of ‘pagies’ from the 25 available in each area and these are obtained by beating all manner of challenges such as jumping through hoops, racing a cloud around a dried-out river bed, competing in a variety of arcade games or defeating bosses. Sometimes these trials will have an obvious solution while others will require that you have unlocked a specific move by purchasing them with collectable quills from a slightly dubious snake named Trowzer.

These quills are scattered everywhere throughout the adventure, along with numerous other items to retrieve, though you may end up scratching your head trying to find every last one of them amongst the often confusing landscapes of the worlds.

While each area may look pleasant graphically, both docked and undocked, their design often feels haphazard and lacking a proper focus or direction for the player, a problem exacerbated when each level is expanded beyond its original state. On many occasions you will need to return to a previously unassailable challenge with new moves only to struggle to remember exactly where specific tasks and encounters occurred. Other times, you may make an error jumping across platforms and through obstacles high in the air only to fall to a lower part of the landscape and have to make it all the way back up to have another go. 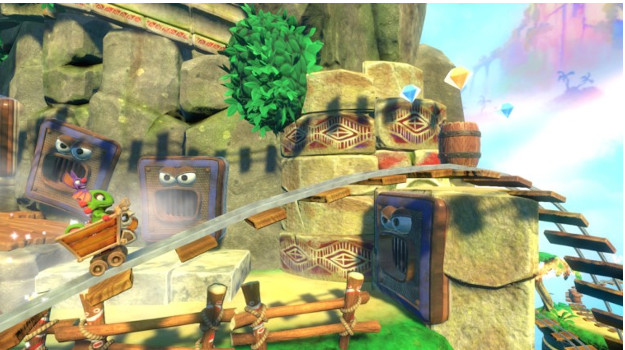 Minecart sections in a Platformer? Nah... it'll never catch on.

Having loved Donkey Kong Country on the Super Nintendo, and indeed more recent incarnations of the franchise, I was particularly looking forward to the minecart sections in each zone given how great these types of contests can be. Unfortunately, these proved to be one of the biggest disappointments of Yooka-Laylee with awkward controls and frustrating obstacles.

In fact, although the controls may be more than functional for the duration, they never feel quite as tight as you would perhaps hope, especially if you’ve been spoiled by Super Mario over the years!

Despite the negativity, there is a decent game here and one that has plenty of redeeming qualities, not least the humorous dialogue between many of the game’s characters which often break the fourth wall and reference many modern, and classic, gaming tropes. While some may grumble about the use of grunts and other sound effects that accompany written dialogue in the game, I personally found it a charming throwback that helps add a little personality to each character with Yooka and Laylee being very evocative of the characters Banjo and Kazooie from which they were derived. 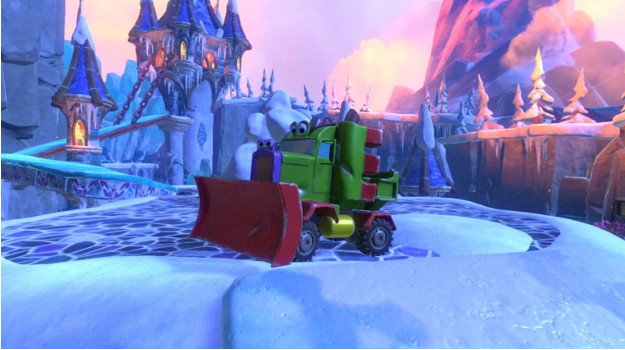 Well, at least the transformations are good and useful too, plenty of snow to shovel this Winter.

The music too, while not remarkably memorable, also captures the tone of those N64 classics.

In terms of performance, Yooka-Laylee mostly runs well on Nintendo Switch making a commendable transition from more powerful hardware. Portable play feels perfect as an option to hunt down one or two pagies at a time but there are instances of the game sticking for a second on occasions but it generally doesn’t impact on your enjoyment.

Yooka-Laylee is a loving, if flawed, revival of a genre that was all but consigned to history before its timely resurgence in 2017. Fans of Banjo-Kazooie will largely find the type of adventure they’ve been crying out for while newcomers get a glimpse into the way things used to be, for better or for worse throughout the 20-25 hours of gameplay.

Yooka-Laylee very much feels like a Banjo-Kazooie game in all but name from the myriad of collectables to the level designs, puzzles, platforming challenges, sound design and even the font used in speech bubbles.