I think I'm supposed to start a review with some thinly veiled attempt at teasing you with what to expect for the rest of it, and hinting as to whether the game is going to be any good or not. Well forget that, I haven't got time to be playing games with you, so here it is. Yoshi's Woolly World is, in my humble opinion, an instant classic, and quite possibly the finest game on Wii U. It's certainly the stand-out 2D platformer on a console littered with them, and a game you simply must experience even if you have to go out and buy a Wii U for it. But is it any good? Read on to find out mo...oh, wait.

Right from the loading up screen, the charm of this game just oozes out of the screen. The design is based around Yoshi being made up from wool, similar to Good Feel's last game, Kirby's Epic Yarn. However they've taken the basis of a great idea and style from that and polished (or should that be knitted?) it and refined it to make an outstanding visual concept a glorious reality. The promotional videos don't do this game justice. To see the woollen world come to life on your own television is a sight to behold. 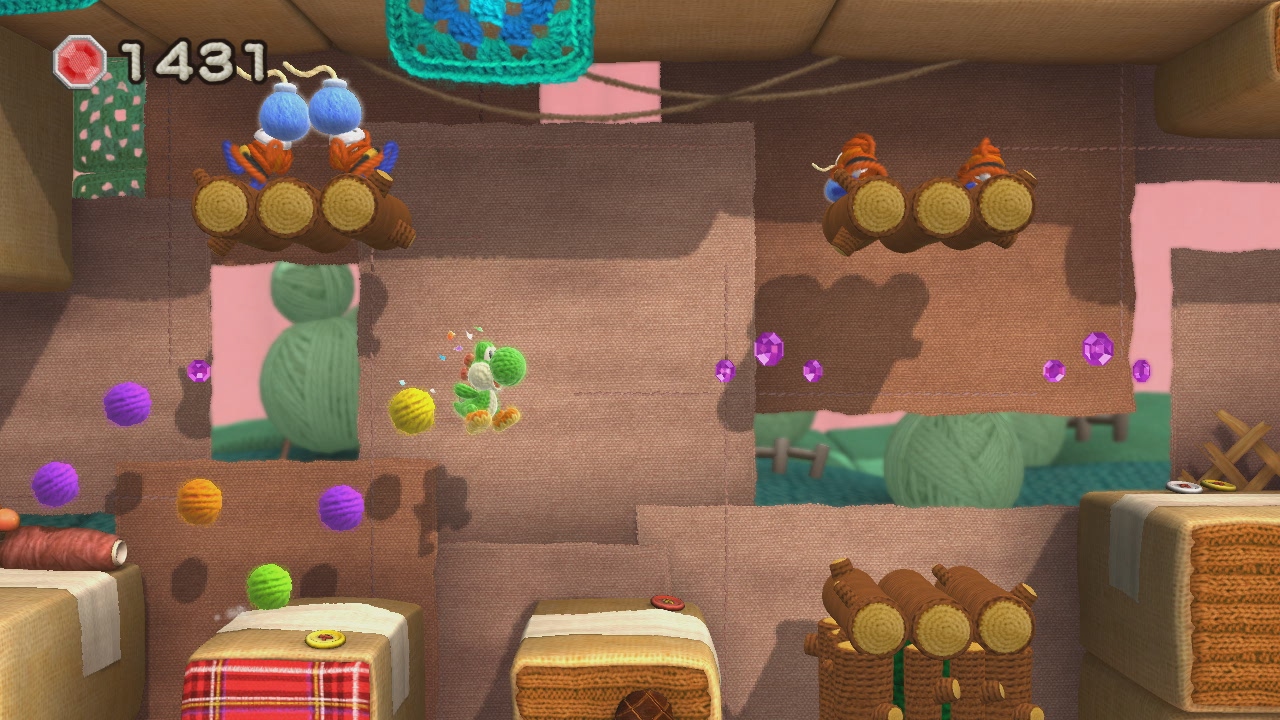 This woollen aspect isn't just in the visuals either. They've embraced it in the gameplay mechanics as well. All of the enemies, whether that's Shy Guys, Piranha Plants or the games bosses, are made of wool too, as are many of the games puzzles and, excellently, Yoshi's projectile eggs have been replaced by balls of yarn. Gobbling up enemies has never been more fun when you get to see them turned into woollen ammunition and thrown at other unsuspecting bad guys.

The story is a flimsy as a woolly weather vane, as you'd expect from a Nintendo platformer. All is well on Craft Island until Kamek flies over the Hand made ocean and steals all of the Yoshis except two, who then must chase down Kamek and save their friends. That's your lot, anyone looking for War and Peace will be left sorely disappointed. But, as always with Nintendo platformers, this naff story is purely an excuse to then go rip-roaring through some absolutely incredible levels. 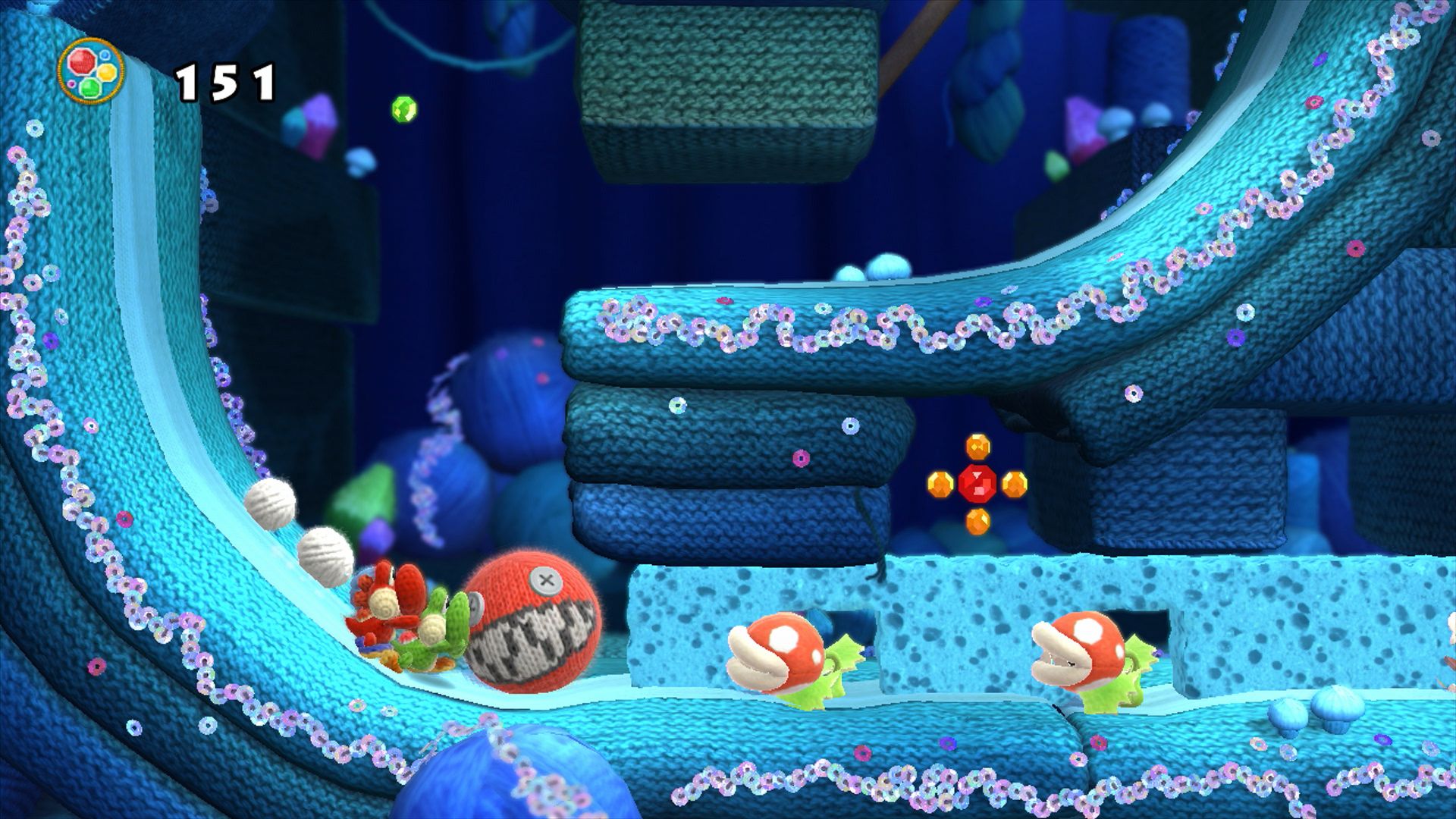 The first world acts mainly as a tutorial, getting to grips with the mechanics of swallowing enemies, using the aforementioned yarn balls, learning to hunt for secret parts of levels and what you need to collect. Each level in the first world is completed fairly easily, however if you're going for 100%, you'll have your work cut out. All flowers, all yarn pieces (which rebuild a different coloured/styled Yoshi for every level, which you can then play as) all Miiverse stamp tokens and, the kicker, finish with full health are all required to gold star each level. Bearing in mind the difficulty noticeably increased from the second world onwards and if you're truly looking to master Yoshi's Woolly World you'll have your work cut out.

There are six worlds in total with eight levels each (as well as secrets of course...) with the usual themes included; forest, desert, water, jungle, snow and, err...toy box/dresser hybrid. But with the added woolly charm, it breathes new life into these staple world ideas, each one exuding a freshness which in any other style might be grating. It's just so satisfying to see what they've done with such stereotypical and expected themes and how they keep confounding your ideas at every turn. I must also say from a personal point of view the snow world and levels within it has overtaken Banjo-Kazooie's Freezeazy Peak as my favourite Christmas level. I didn't care that it was June when playing through this, I felt all cosy and Christmassy enjoying the music which went from all out jingles to slower, carol style rhythms from level to level. 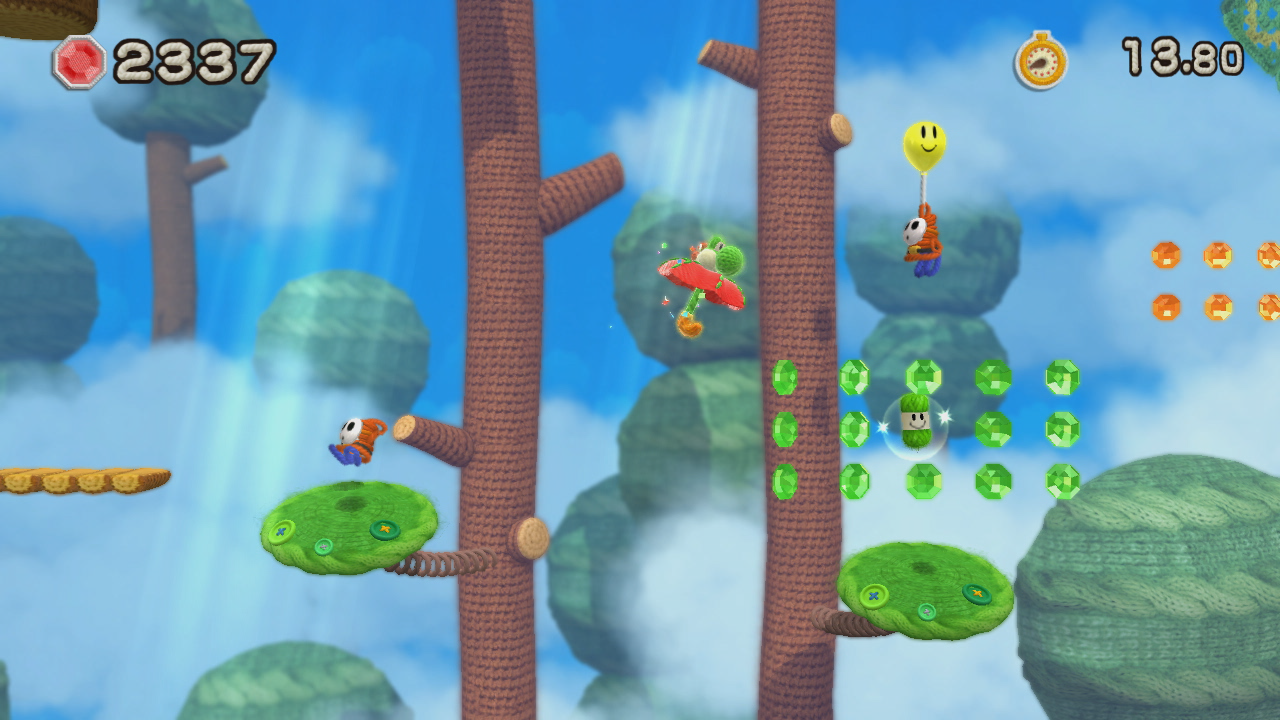 Ah the music. I'm writing this with the sound test open, listening to the tunes from this game and tapping my toes, swaying my head and moving any other part of my body I can (steady). The music is, in places, Animal Crossing-like in its relaxed, chilled out style, perfectly encompassing the style of the game, with gentle guitar riffs and percussion instruments doing most of the work. But it's the relentless quality of every tune that is phenomenal. There isn't a bum note as you go from level to level, world to world, and revel in the aural majesty on the offer. I really hope they release some sort of CD/compilation in the future as I would love to have this brilliant soundtrack for a lazy Sunday afternoon relaxing on the sofa.

The game play is tight and intuitive. Levels provide a tough challenge at the best of times, let alone when going for that 100% mark. There are lots of secret passages, hidden clouds and beads to collect throughout each level, which can be made easier with the badge mechanic. Unlocked as you progress, you can 'equip' a badge on every level which can help you depending on what you're trying to do. For example, if you're scratching your head over the last piece of wool to find on a level, you can equip the badge that shows you all the hidden parts of a level. Or if something is just out of your reach every time, equip the badge that magnetically pulls all items towards you and you'll be sorted. It's a nice touch which helps make the idea of fully completing this game a reality, because it does get tough, really tough, without ever feeling unfair. In fact one of few gripes with the game is the boss battles, which are laughably easy. If you've spent a good thirty minutes figuring out a level, it's at once a relief but also a disappointment to come across a boss who requires little-to-no challenge. Not once did the boss live up to the level, or even trouble me, unless I was going for the full health finish to the level, in which case it added a sense of the jitters to proceedings. But any mistakes were my own rather than because the boss outwitted me. 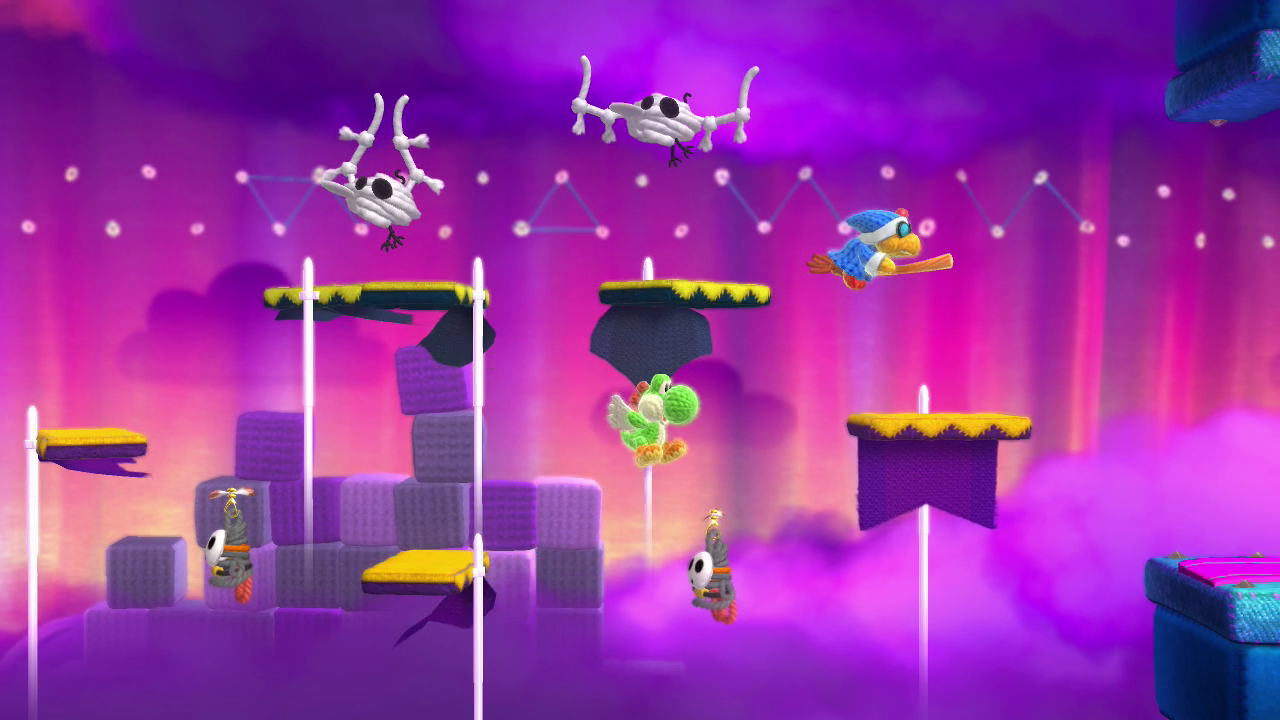 Multiplayer is a welcome addition too, although it is only supported locally. What this does mean is that mischief is absolutely abound, with team work obviously the preferred option. However, this is often replaced by an innate desire to swallow your fellow Yoshi and use him or her as a yarn egg, Which is sometimes necessary but mostly it's done just to annoy the person sat next to you. A really cool feature is the ability to change into any of the Yoshis you have 'saved' from each level, with some fantastic designs for those collecting enough yarn pieces per level. Throw in amiibo support which allows you to scan your amiibo to create more themed Yoshi designs (Samus and Pit personal favourites of mine) and it can, bizarrely, make this feel like a very personal adventure.

GamePad support is limited to off-TV play, which is never a bad thing as far as I'm concerned, however it would have been nice to have some additional features with the touch screen like New Super Mario Bros U or Rayman Legends. As it is, you can use and calibrate the the game pad buttons how you wish, with the game also supporting the Pro Controller, Wii Remote and Wii Classic controller too. Probably too many options, really, however it's nice to have a choice and be catered for should you own one of the older controllers. Again, it adds to to the personal touch of the game.

My only other main gripe with this game, apart from weak bosses, is that it's another 2D platformer. Fair enough they got New Super Mario Bros U out of the gate early, but I still have the first time I saw Mario 64 ingrained in my memory; the sheer scope and wonder of it all! Nothing has done that for me yet on Wii U (and I'm afraid I subscribe to the Super Mario 3D World being a 2.5D game theory) and this game, with its art style, really could have. The control of Yoshi in the HUB world feels slightly off, but the look of it, no matter how limited, is a tantalising taste of what could have been, and it looks lovely. Sigh. Maybe the Nintendo's next console, codenamed NX, will see the reemergence of Nintendo producing worlds of breathtaking scope and majesty that was a staple of the N64 era. 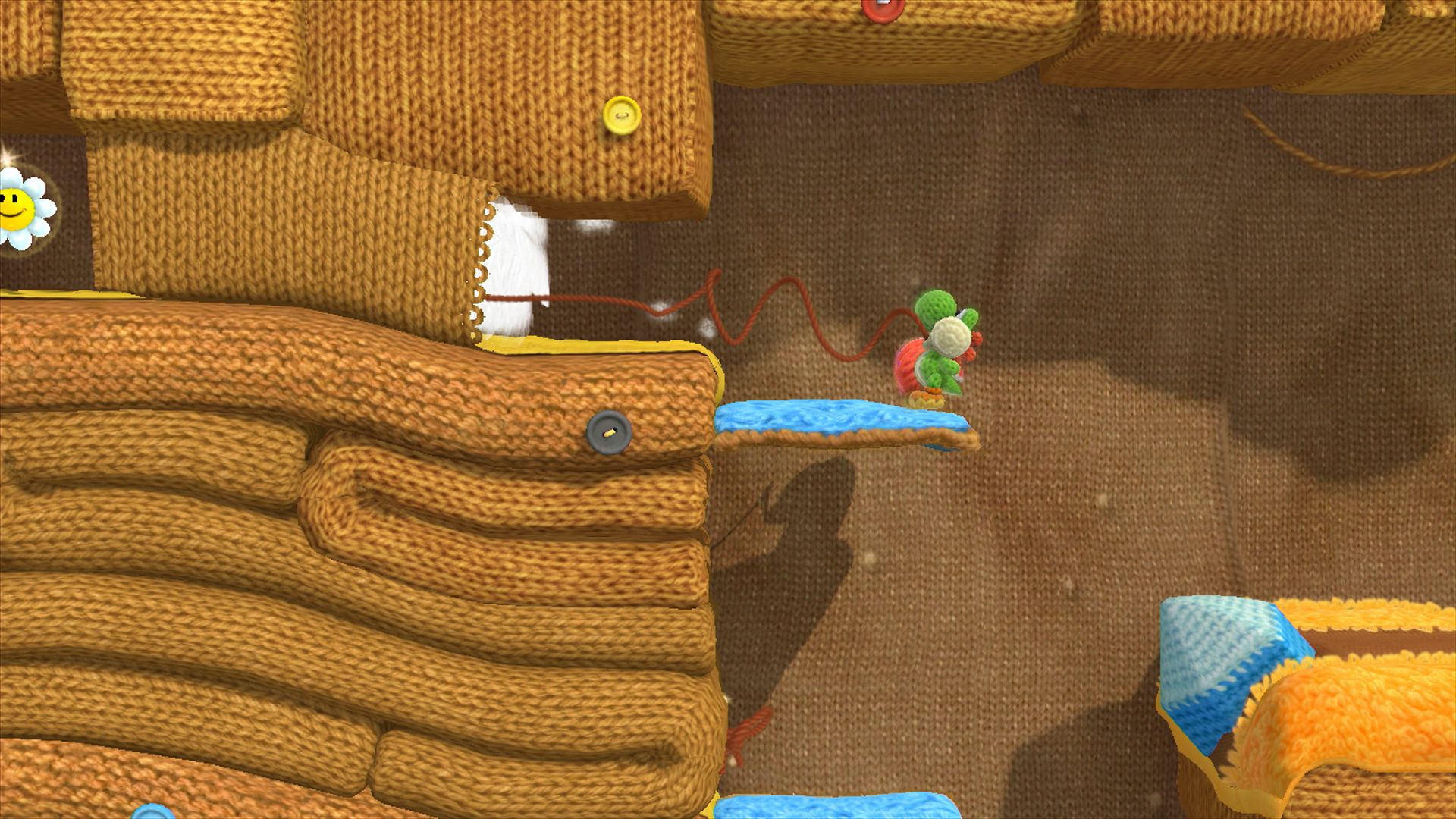 Anyway, back to more positive thoughts, I completed the main game in roughly seventeen hours, which was a very pleasing length and there wasn't a dull moment involved, either. I'd estimate that trying to get everything, if you're that way inclined, would take another ten or so hours minimum. During the E3 direct Nintendo said it was the sort of game you can play through easily, but it gets much harder if you want to do it all, and that's certainly the case here. Following in the footsteps of Super Mario 3D World, New Super Mario Bros U and most first party Nintendo games that have this style of game design.

This could be a case of one reviewers opinion being completely off compared to the consensus, but I really did feel like I was playing a classic during my time with Yoshi. This game is just so good; from the incredible graphical style, the amazing music, the glorious level design, the hidden secrets, the amiibo support, the sound test and enemy gallery, the ability to change to different style Yoshis at any time...I cannot, cannot recommend Yoshi's Woolly World enough to every gamer, whether young or old, it's just too good to miss and you'd be robbing yourself of a fantastic experience. Now, Nintendo, this is the perfect time to drop the mic after hitting the heights of this beauty; no more 2D platformers. You've peaked, let's go full 3D expansive world next time shall we?

Yoshi has knit new heights (sorry) in Woolly World, providing his, and the Wii U's, greatest moment yet. If you're foolishly dissuaded by the cute and charming art style, don't be. Underneath it all is a rock hard game that will challenge and test you, all while leaving a huge grin on your face from ear to ear. Not to be missed.

To see the woollen world come to life on your own television is a sight to behold.